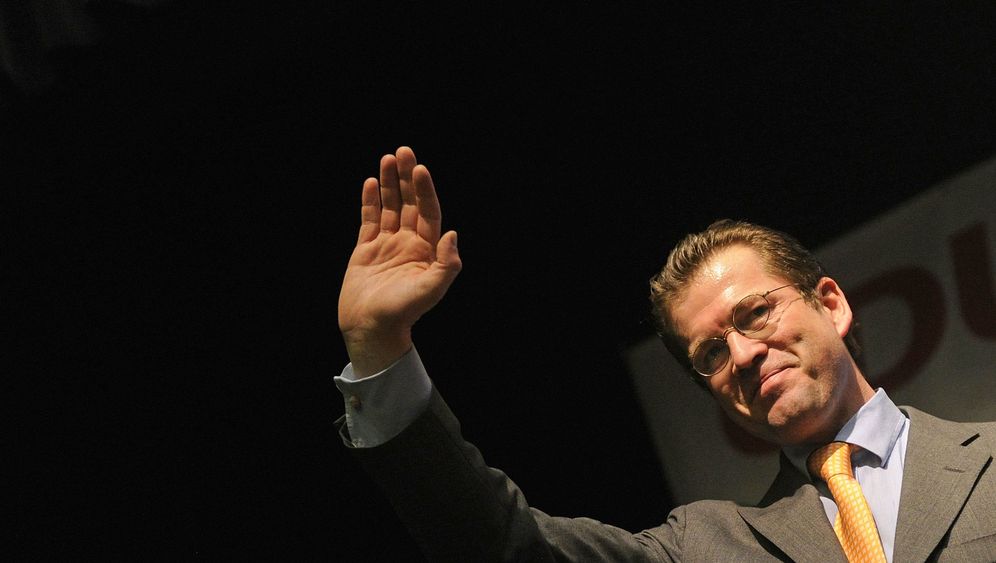 At first, he thought he could withstand the pressure. But in the end, even German star politician Karl-Theodor zu Guttenberg could not escape the growing scandal surrounding indications that he plagiarized large portions of his doctoral dissertation. On Tuesday, he announced his resignation.

"I have always been ready to fight the fight," Guttenberg said during his brief audio announcement broadcast at shortly after 11 a.m. "But I have reached the limits of my strength."

Government sources told SPEIGEL ONLINE that the defense minister reached his decision to leave Chancellor Angela Merkel's cabinet on Monday. His resignation is effective immediately and it was not clear yet on Tuesday who might take over leadership of the Defense Ministry.

Merkel said on Tuesday that Guttenberg will remain acting defense minister until her government can name his successor -- which, she said, will happen "soon." The chancellor said she only learned of his decision to resign on Tuesday morning.

"I very much regret his resignation," she said. "But I have understanding for his personal decision." She seemed to leave open the possibility that Guttenberg could soon return to a position of political responsibility. "I am convinced," she said, "that we will have the possibility to work together again in the future, in whatever form that might take."

Despite the chancellor's supportive comments, however, Guttenberg's move came after days of increasingly pointed statements from within Chancellor Angela Merkel's governing coalition and even from within Guttenberg's own party, the Christian Social Union (CSU), the Bavarian sister party to Merkel's Christian Democratic Union (CDU). Even as Merkel herself stood solidly behind her defense minister, the darkening mood among the country's conservatives became difficult to ignore.

Parliamentary President Norbert Lammert (CDU) sad that the scandal was "a nail in the coffin of confidence in our democracy." Minister of Education and Research Annette Schavan, likewise of the CDU, said that "intellectual theft is not a small thing." And former CSU head Günther Beckstein told the newsweekly Stern that "the affair surrounding his dissertation damages both the CSU and Guttenberg himself."

The internal grumblings came despite efforts by Guttenberg to defuse the scandal. Last week, as the scale of the problems with his dissertation became fully apparent, he asked his alma mater, the University of Bayreuth, to withdraw his Ph.D., which he was awarded in 2006. The university did so shortly thereafter. Guttenberg also made an appearance before parliament last week during which he expressly apologized for the problems with his dissertation in the hopes that, by confronting his critics in the opposition, he could take the wind out of their sails.

The CSU star's first line of defense, however, appeared to be his repeated insistence that the problems with his dissertation had no bearing on his position at the head of the Defense Ministry -- an effort that Merkel herself had supported, saying last week that she had chosen Guttenberg to head the Defense Ministry and not "as a research assistant."

In his brief statement on Tuesday, Guttenberg once again seemed to blame his critics and the German media for focusing so intently on his dissertation. "If, as has been the case in recent weeks," Guttenberg said in his Tuesday statement, "the attention of the public and the media is almost exclusively focused on the person of Guttenberg and his dissertation instead of, for example, the death and injury of 13 soldiers (eds. note: three German soldiers were killed in Afghanistan last week), then it ... harms the institution I have been tasked with leading."

Recently, though, criticism had begun to focus more on his denial of intent then on the dissertation as such. Guttenberg repeatedly insisted in recent weeks that any problems with citation in his dissertation were the result of sloppiness and were not premeditated. Given the massive extent of the problems, however, many in both the academic and political worlds found the claim difficult to swallow.

Just how vast the problems with Guttenberg's dissertation were became apparent largely as a result of a website established two weeks ago to comb through the document. The so-called "GuttenPlag" Wiki allowed users across Germany to point out passages that had been copied from elsewhere. By Tuesday, the Wiki claims to have found problematic passages on fully 300 of the document's 475 pages.

As such, Guttenberg's resignation could be seen as the victory of the Internet over Germany's most powerful media voice, that of the mass-circulation tabloid Bild. The broadsheet spent much of last week rallying its readers behind Guttenberg with call-in campaigns and editorials suggesting that the defense minister's academic shortcomings had no bearing on his political position.

German politicians, such would seem to be the message, ignore the power of the Internet at their peril. It was, in fact, the GuttenPlag Wiki which made Guttenberg's claims of sloppy footnoting so difficult to believe.

Indeed, such doubts resulted in a leading politician from Merkel's coalition going on the record on Monday with calls for Guttenberg to step down. "Should he continue to allow the circumstances of his dissertation to remain so unclear, I think that he, as minister and as the top official of two Bundeswehr universities, is no longer acceptable," Martin Neumann, parliamentary spokesman for academic issues for the business-friendly Free Democratic Party (FDP), Merkel's junior coalition partner, told the Financial Times Deutschland newspaper.

Indications that Guttenberg had plagiarized parts of his dissertation were first reported by the Munich-based daily Süddeutsche Zeitung in mid-February. Initial attention focused on entire paragraphs from newspaper and journal articles that found their way into Guttenberg's work, which was awarded the highest possible mark by the University of Bayreuth. Soon, it also became apparent that even the first two paragraphs from his introduction were not his own. Crucial analytical sections of the work -- a comparison between the creation of the US Constitution and efforts to produce a similar document for the European Union -- were likewise taken from external sources.

'Most Painful Step of My Life'

The German parliament got involved last week after it became clear that Guttenberg had even violated Bundestag rules by pasting entire research notes compiled by parliamentary research assistants into his final draft. Guttenberg tried to deflect concerns by emphasizing that he had written his dissertation in parallel with his duties as a member of the Bundestag, which he joined in 2002, and as a family man.

Guttenberg leaves behind a Defense Ministry in the middle of its furthest-reaching reforms in years. In recent months, Germany eliminated mandatory conscription in favor of a purely professional army but has recently struggled in the attempt to recruit enough new soldiers to fill the gap. There had likewise been talk that Merkel herself was dissatisfied with the progress of the reform.

Guttenberg, however, had proven able to weather criticism in the past. As recently as January, his leadership was questioned when a trio of mini-scandals hit the headlines in Germany. One involved the opening of mail from soldiers in Afghanistan before they reached their destination; another saw questions arise about the death of a soldier in Afghanistan after he and a comrade were playing around with a weapon; and a third involved the death of a sailor on board the German naval training ship Gorch Fock.

But Guttenberg had long seemed immune to the scandals. Even as the political opposition in Berlin has accused him of often being less than forthcoming when it comes to questions about his leadership, his direct style of speech and leadership has endeared him to broad swaths of the German public. Indeed, he was widely praised when he took over the Defense Ministry for his willingness to use the word "war" when describing the situation in Afghanistan -- a term that political Berlin had been eager to avoid until then.

In the end, however, questions about his forthrightness proved to be his downfall.

"This is," he said on Tuesday, "the most painful step of my entire life."