Anyone who hasn’t explained to their elderly parents how to use Skype or Facetime yet should do so soon. It’s worth it. Unfortunately. It’s likely our grandparents will be living in isolation for a long time to come. And it’s also possible they will have to go back into isolation repeatedly in the years to come, for months at a time -- without their grandchildren, hugs or the ability to get close to other people.

As long as we want to prevent the kind of human inferno caused by the outbreaks in Italy and Spain, we will have to maintain the isolation we have had so far in Germany. The fact that we might have to live with this until 2022 isn’t scaremongering -- it’s a realistic scenario. That’s what Harvard professor Stephen Kissler and researchers working with him have just calculated for the United States. The underlying figures may differ from those in Germany, but the dynamics are likely to be similar.

Kissler’s curves depict the catastrophic scenario of an everyday shutdown that would have to be imposed repeatedly if governments dared to relax social distancing measures. Depending on the spread of the disease, people might have to spend up to three-quarters of a year in isolation to prevent overloading the health care system. They write that there could even be a new outbreak of the pathogen as late as 2024.

Science Will Provide These Answers, but Not Now

We are only at the beginning of the pandemic. And the virus has already forced the world to confront an unbearable dilemma: Living under lockdown with all its social, economic and psychological consequences versus the risk of allowing the disease to run free. It would kill millions of people -- not only the frail, but also doctors, nurses and young people.

Science will eventually provide these answers, but not now. It will take time, a long time. Proper science requires meticulousness, doubt and tirelessness. And sometimes it has no choice but to deliver bad news like that in Kissler’s study: Defeating the virus may take many months, perhaps even years of shutdown. But people don’t like hearing bad news like this when the sun is shining and they are fed up with the shutdown. This has tempted some politicians to try to order the scientific foundations themselves for loosening the lockdown.

In No Time at All, Children Could Turn Their Schools into Virus Hot Spots

That’s what happened most recently with a study of the town of Heinsberg, a center of infection that has been dubbed Germany’s Wuhan, conducted by the respected Bonn-based virologist Hendrik Streeck. In the service of Armin Laschet, his ambitious state governor in North Rhine-Westphalia, Streeck allowed himself to get a bit carried away and announced the early results of his study too hastily and without the backing of critical colleagues. Politically, the relatively high number of infections in the town and the immunity it is hoped that would create, has been exploited as an argument for loosening the lockdown for all of Germany.

The German chancellor, who is herself a trained scientist, casually talks about the reproduction number "R,” meaning the average number of people an infected person further infects. It should also be clear to her that the relaxation of the shutdown now agreed with the prime ministers doesn’t make sense scientifically.

Take, for example, the prospect of opening up elementary schools under the condition that children respect the rules of hygiene. Seriously? Who's going to stop 9-year-olds from roughhousing, dancing and playing? In no time at all, the children could turn their schools into virus hot spots, the number of infections will rise and it will force the kind of shutdowns Kissler has warned about.

Especially if children are more infectious than previously thought. In the case of influenza, which afflicts us every year, they are considered the "drivers of infection,” and they play a decisive role in the spread of the disease. Does that apply to the coronavirus, as well? Research still needs to be done on this -- it’s just one example of how little we actually know about this pandemic. When it comes to loosening the lockdown, the rule should be: Review anything before applying it. Are comprehensive virus or antibody tests part of the solution? How low does the R need to be pushed before you can loosen things? How long will immunity last? And: Will the much-coveted vaccine ever be found?

Researchers at the Helmholtz Association of German Research Centers have sketched a scenario that could possibly contain the COVID-19 pathogen: It entails a complete shutdown. One even stricter than the lockdown conducted so far. In all likelihood, within four or five weeks, the disease would be brought down to a simmer, to a low enough number of infections that we could likely risk localized experiments like school openings. For that this to happen, though, politicians would have to be more patient and actually listen to the scientists. 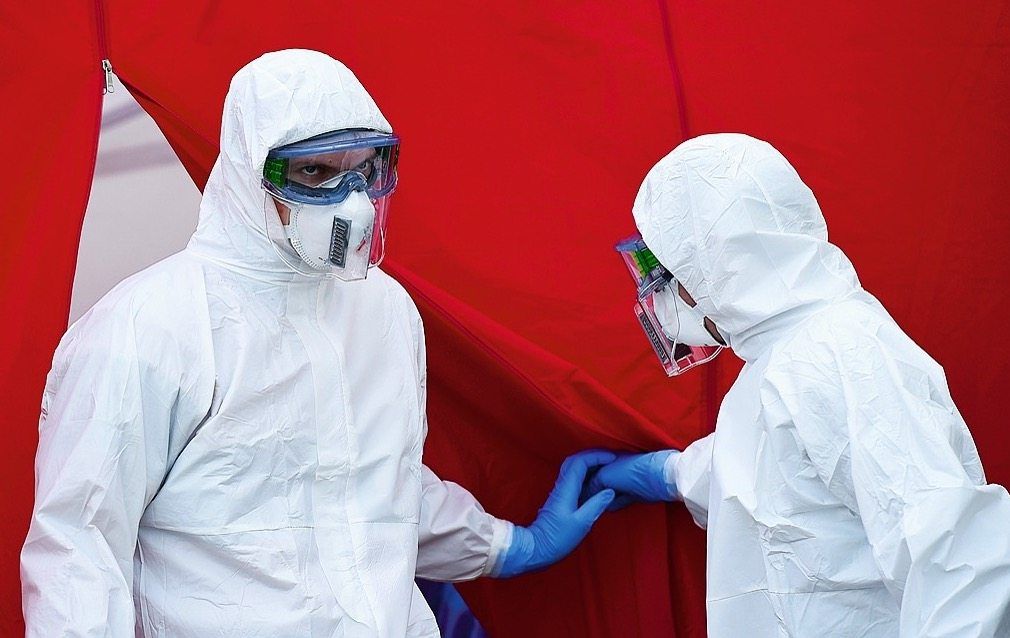 Medical workers at a coronavirus testing center in Dresden