The hard work and privations to fight the coronavirus in Germany have been difficult: no daycare, no shopping, no vacation, no concerts. But the measures are having an effect. The country is letting out a sigh of relief, and many Germans are now yearning for a return to normalcy. Instead of telling people to relax, however, experts are sounding the alarm. A second wave, they argue, will spread across the country. It might happen this summer, or, as the Robert Koch Institute, Germany’s centers for disease control, warned in March, it will happen "at the latest in the fall or winter.” That’s the point when many hospitals could reach their limits.

A number of leading epidemiologists agree that it is not a question of if, but of when. And when the highly infectious SARS-CoV-2 virus returns, the consequences could be worse than they were during the first wave. "A wave of infections like that would, of course, have a completely different impact,” Christian Drosten, the head of the virology department at Berlin’s Charité University Hospital, said in his popular podcast last week.

But how could it be that these emergency measures -- whose side effects have included bringing the world’s biggest economies to their knees -- are insufficient for tackling their minuscule enemy? Why haven’t the lockdowns, which have cost the world’s economies billions, not stopped the spread of the disease? It’s possible they may only slow it down before it speeds up again.

The explanation may be surprising at first, but it’s also simple. So far, chains of infection have been concentrated in certain areas in Germany -- in communities like Heinsberg in the western German state of North Rhine-Westphalia or Rosenheim in Bavaria. But the second wave will likely not emerge from a small number of locations, but all across the country.

COVID-19 doesn’t know street demarcations, municipal limits or national borders -- it spreads invisibly from town to town, until it is everywhere. "The virus will continue to spread across Germany over the next few months and weeks and over the summer,” Drosten said.

That doesn’t sound so bad on the surface – it’s though every county would simply get a few corona patients, no problem. But it’s not that simple. A nationwide distribution would mean that the epidemic could flare up anywhere in the country – suddenly, and at a breakneck speed.

Setting Off a Forest Fire

It’s as if a group of hikers had lit a fire in the forest, and the sparks set a nearby spruce ablaze. After they suffocate the flames, they think they’ve been lucky, but while they sleep, the embers burn in the undergrowth, spreading further and further. Soon, a breath of wind is all it takes to set off a forest fire around them.

The second corona wave could happen similarly. This is what happened during the Spanish flu a century ago. After a first wave, the deadly infection returned to many cities in the autumn, and overwhelmed them in its second attack.

"The virus will continue to spread across Germany over the next few months and weeks and over the summer."

Epidemiologists describe the effect of this second flare-up using the virus’ reproduction number, or "R,” which describes the number of people who can be infected by a person who has the virus. Without control measures, a person with COVID-19 infects an estimated three or more people. In Germany, this value is currently less than one. This is an interim success, but not a victory. The chains of infection continue to spread, silently, just a bit slower than before.

The future goal won’t just be to keep individual infection flare-ups in check, but also potential conflagrations. According to a statement by the Helmholtz Initiative, a German research group, if the government allows a lot of contact between people, "the infection activity would inevitably resume and overload the health system within a few months.” The researchers recommend using today’s hard-earned breathing room to massively expand testing capacities and contact tracing by health authorities so that "the epidemic can be controlled in the long term.”

The second wave of the virus may not happen for several months. But today’s actions will determine whether the country will be able to control it when it does. 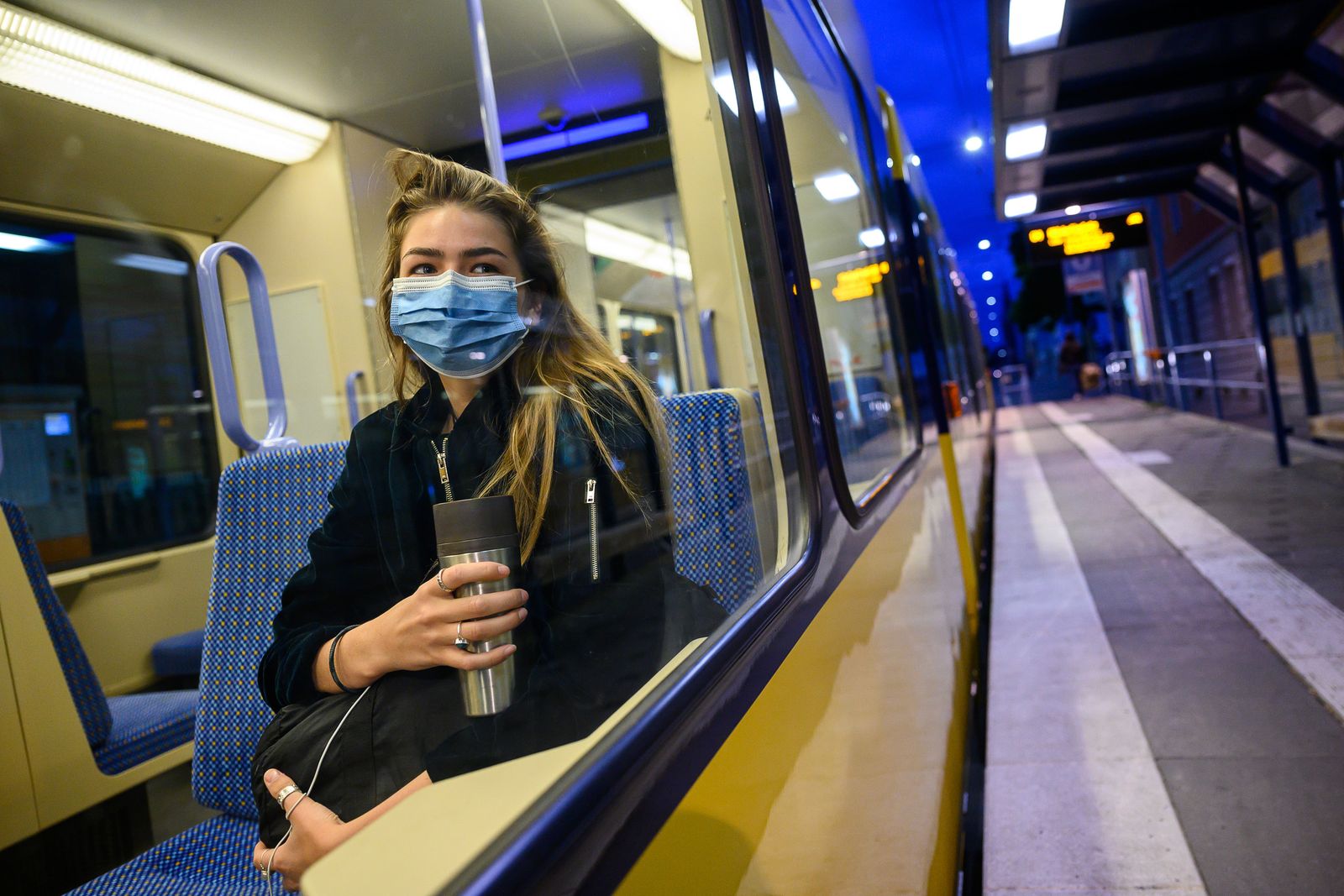 A woman wears a mask on a tram in Stuttgart, Germany.