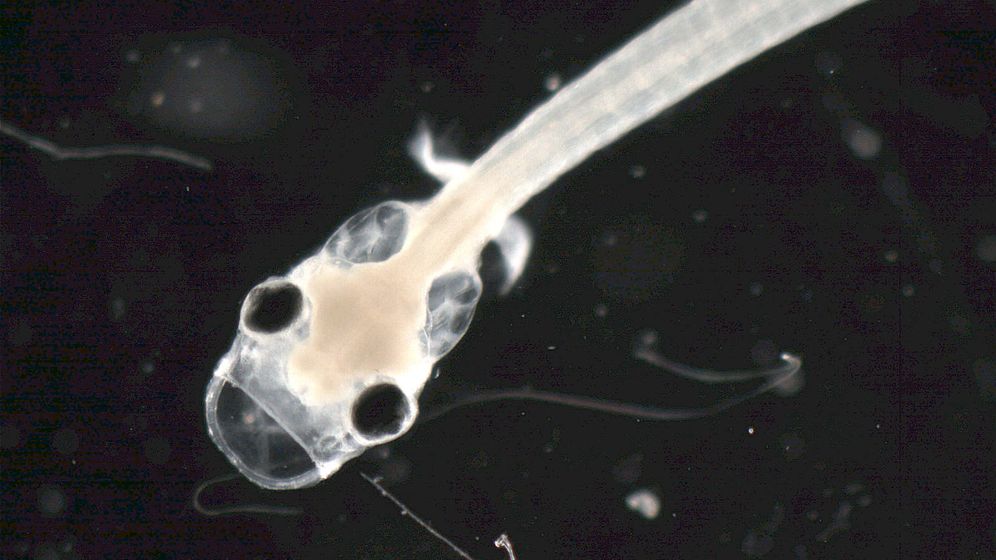 Preserved in formaldehyde and lying there in the stereo microscope's white light, the three fish larvae look like soybean sprouts. They're just one very small part of the spring-spawning herring found in the western Baltic Sea. In Germany, they are probably best known in the form they take much later: the tasty German snack known as Rollmops, a marinated herring fillet usually served rolled up around a pickle.

But these larvae are still far from meeting their maker. Measuring the larvae, which were caught about a year ago in very fine-meshed net, they are barely 10 millimeters long.

"Here you can already see the head, the eyes and fins," says Christian von Dorrien. The biologist works for the Von Thünen Institute for Baltic Sea Fishery in the old harbor in Rostock, a Baltic Sea port city in the state of Mecklenberg-Western Pomerania. And while the water of the Warnow River estuary flows by the laboratory window, von Dorrien's colleague Dagmar Stephan is pre-occupied with lists of numbers, recording the size of fish larvae.

The work is tedious and tiring. But von Dorrien and his colleagues need the long lists in order to make important forecasts: When can the fishing industry expect a good herring season? And when will their nets remain empty? Around 80 percent of the season's herrings begin their lives in the Bay of Greifswald. From there the fish make their way to the North Sea -- some even make it as far as the coast of Norway, where they feed. Many will return to the area; Herring can live for as long as 30 years.

Since 1977 the scientists working in Rostock have been journeying out into the bay in their small cutter, the Clupea, spending as many as 16 weeks taking samples which they later use as a base for their herring catch predictions. The last results were not particularly inspiring. "We are certain that, at the moment, the herring population is going through a tough phase," von Dorrien says. And nobody knows exactly why the last few spawning seasons have been so bad. It could have something to do with the fact that climate change is warming up the waters of the Baltic Sea -- but this has not yet been conclusively proven.

And this year the ailing fish nursery is likely to face another big challenge: Work is set to being on the Nord Stream natural gas pipeline and this will involve burying pipes in meters-deep trenches in Greifswald Bay. Work on the mammoth project could ostensibly start at any time but right now, but the herring are holding up construction. Because of the presence of the baby herring, workers are only permitted to start digging trenches here in the middle of May. "We have committed to this time frame because of the herring spawning season," Ulrich Lissek, the spokesperson for the Nord Stream consortium, confirms.

In the meantime, though, the preparatory work continues, and with all the force of an unstoppable juggernaut. And there is nowhere better to experience it than in Sassnitz's ferry harbor, on the northeast coast of Rügen island. An arctic wind whistles between truck trailers driving along the slushy roads. Of the many commercial buildings built here by the East Germans, a few are still empty. Under a giant canopy of cranes stand decommissioned locomotives, their red paint slowly fading. And everywhere else: Pipes, pipes and more pipes -- black on the outside and red on the inside.

At various storage areas around the ferry harbor, around 45,000 pieces of pipeline -- each one around 12 meters (39 feet) long -- are being stored. That is 550 kilometers (around 342 miles) worth of pipeline. Since the spring of 2009, workers at a factory built by the French company Eupec especially for the purpose have been coating the pipe segments with concrete. This treatment doubles the weight of each pipe to around 24 tons and ensures that the pipes won't float to the surface. When the pipeline eventually goes into operation, it is expected to carry Russian natural gas to Europe for at least 50 years without problems.

Nord Stream: 'Everything Going According to Plan'

Every day around 200 pieces of pipe are covered with the thick concrete coating. Inside the Eupec factory, a low rise building with a red roof, the vibe is a bit like Willy Wonka's chocolate factory. The pipes slide almost soundlessly along conveyor belts to have a wire cage placed around them. Then they are covered with concrete. Everything is -- more or less -- automated. After this, the pipes are dried in what employees here jokingly call the biggest sauna in Mecklenberg-Western Pomerania.

More pipes arrive regularly by train. Some days there is one train, other days there are two. A red crane unloads the wagons, stacks the pieces of pipes in imposing piles or loads them directly onto trucks. These then deliver the pipes to the concrete-coating factory or straight to the wharf where, night after night, they are loaded onto ships that take them to the Swedish port of Slite, where another storage facility is located. It is all part of a logistical masterwork that allows the builders to know exactly where any piece of pipe is, at any time. "Every piece of pipe is identifiable," Lissek boasts.

Before taking this job with the pipeline consortium, whose board is chaired by former German Chancellor Gerhard Schröder, Lissek worked for German telecommunications giant Deutsche Telekom and supermarket chain Rewe. The public relations professional has a clear message to convey: Preparations for the pipeline are going well and there is no need for anyone to worry about the environment. In short: Everything is going according to plan.

Lissek describes how giant pipe-laying vessels will soon be lowering the welded pieces of pipeline to the bottom of the Baltic Sea. The pipeline is to consist of two pipes -- the first is to be laid this year and the second in 2011. The only exceptions to this schedule will happen where the pipeline makes landfall in the German coastal resort of Lubmin and in Vyborg in Russia, near the border with Finland. There, sections will be laid simultaneously in order to minimize the environmental impacts.

But there is still a problem. Near the coast the pipeline needs to be buried beneath the sea floor. This is done to prevent a worst-case scenario of the land-locked junctions breaking apart if the pipeline moves around on the ocean floor. Still, even burying the pipeline close to the coast is problematic -- not least for the local herring. The fish lay their eggs in the plants growing in the shallow waters of the bay, and it takes the eggs two weeks to develop into larvae.

Those larvae could be threatened by construction if digging for the pipeline stirs up too much sediment, which could cover the fish larvae and potentially asphyxiate them. Nobody really knows for sure whether this will be a problem -- but the fisheries scientists are urging caution. "For scientific reasons we are opposed to starting the (pipeline) construction on May 15," von Dorrien says. "It would be better to start building in June or July."

The Nord Stream pipeline builders attained the approval of all the nations affected by the pipeline some time ago. But environmentalist organizations WWF and BUND, the German branch of Friends of the Earth, have filed for a temporary injunction to stop construction with the higher administrative court in Greifswald. The conservationists argue that the permit issued for the construction of the pipeline did not provide sufficient compensatory measures for the environmental damage it would cause. They argue, for example, that digging will stir up residues of fertilizers left on the on the ocean floor, such as nitrogen and phosphorus. They believe the work could present a serious threat to the Baltic Sea eco-system and they are critical of the fact that Nord Stream only plans to compensate for 40 percent of the encroachments -- a figure they consider to be far too little.

Spokesperson Lissek confirms this figure and says the consortium will pay compensation of €3.6 million -- just as it says in the planning permission.

Will German Judges Side with Environmentalists?

The conservationists believe this figure is too small. They are also critical of the fact that the ocean shelf between the Greifswald Bay and the Baltic Sea will have to be partially dug up because a channel needs to be made, for the large pipe-laying ships to get through. The sediment removed is expected to be planted back on the ocean floor near Usedom.

Nobody knows when the judges will make their decision at the court in Greifswald, which is about an hour away from Rostock. It will have to be soon though -- construction is supposed to begin shortly. Of course, that could all change if the judges side with the conservationists.

Whatever else happens this spring, pipeline work in the bay may well be endangered again when the herring return at the end of this year. For the herring's sake, the ocean bed there has to be peaceful again between the beginning of 2011 and mid-May. But officials at Nord Stream aren't overly concerned. "We will be finished," Lissek says with certainty.

By the end of this month, the pipeline consortium plans to sink its first piece of pipe -- in the North Sea, and only as a test.