Normally, an empty hospital bed means there were no patients who needed it. But in German intensive care units, beds often go unused because there aren't enough nurses or caregivers.

"In many intensive care units, normal operation is no longer possible due to staff shortages, so many intensive care beds must be made off-limits," Uwe Janssens, the chief physician at the Clinic for Internal Medicine and Internal Intensive Care at the St. Antonius Hospital in the western Germany city of Eschweiler, said along with other doctors in the German medical trade publication, Deutsches Ärzteblatt.

According to a survey, in 2017, 76 percent of intensive care units had to repeatedly block off beds. The problem is still a daily occurrence today. Patients are turned away and can only hope to find an intensive care bed somewhere else.

These days, with infections of Sars-CoV-2 on the rise, the notion of denying people a hospital bed is inconceivable. The biggest concern at the moment is whether, if the epidemic continues to spread, there will be enough places with respiratory equipment to treat patients with the new lung disease COVID-19. Although the Berlin-based virologist Christian Drosten demanded in the German daily Neue Osnabrücker Zeitung that "more intensive care beds urgently be made available," it could very well be that such ambitions fail because the beds are unusable.

Germany has 25,000 intensive care beds with artificial ventilators at 1,160 hospitals.

Generally speaking, "in the field of intensive care medicine, the number of personnel is decisive, and it is the biggest issue when it comes to expanding capacities," says Gerald Gass, the president of the German Hospital Federation.

"We do, in fact, have enough hospital beds in Germany. But we have a persistent problem, and this hasn't only been the case since the outbreak of the coronavirus: We have too few intensive care staff for all of the beds," adds Janssens, who is also the president of the German Interdisciplinary Association for Intensive and Emergency Medicine.

Germany has the highest density of hospital beds in the European Union. At the same time, it currently has a shortfall of 17,000 nursing positions. Of its 497,000 beds, 28,000 are intensive care beds. Here, too, Germany is by far the per-capital leader in Europe. In recent years, many hospitals have added more intensive care beds because they are more lucrative than ordinary beds. Old, terminally ill people are sometimes treated with machine ventilation even though it doesn't do much for their health; artificial ventilation earns a hospital more money.

"Out of hand, pointless treatments for patients with very bad prognoses" is one reason why nurses and caregivers are often disillusioned and no longer enjoy working in intensive care units, Janssens and his colleagues told the Deutsches Ärzteblatt. A high workload, inadequate pay and low appreciation for caregivers have caused many staffers to leave German intensive care units.

"With a very high number of COVID-19 patients, operations and procedures that are not urgent will inevitably have to be cancelled," says Susanne Johna, the chairwoman of the Marburger Bund medical association. "In one fell swoop, this would give us more personnel flexibility in our hospitals. Such a recommendation, however, requires a coordinated, regional approach. Here, the respective state health authorities are required to make appropriate recommendations."

Until then, hospitals will be reluctant to cancel non-emergency surgeries. That's because they would have to keep paying doctors and nursing staff, while at the same time missing out on revenue from such operations.

"If we cut back on non-emergency surgeries for a month or two, we would suffer huge losses. Hospitals would run into financial difficulties," Janssens says. "I'm missing clear instructions from the responsible authorities as to if and when we should free up intensive care capacities." Only then would losses be covered by insurance.

At the St. Antonius Hospital in Eschweiler, hip replacements will be carried out until further notice, though the situation will be reassessed several times a day. Meanwhile, a complete ban on visitors has been imposed. Two employees of the hospital have tested positive for the coronavirus and are currently quarantined at home. Three patients with the lung disease COVID-19 are in intensive care. On Thursday, a patient was scheduled to be transferred from another hospital in Heinsberg.

Nevertheless, of the hospital's 24 intensive care beds, three are empty. This isn't because of a lack of personnel, but in order to be prepared for a scenario that hopefully will not come to pass. 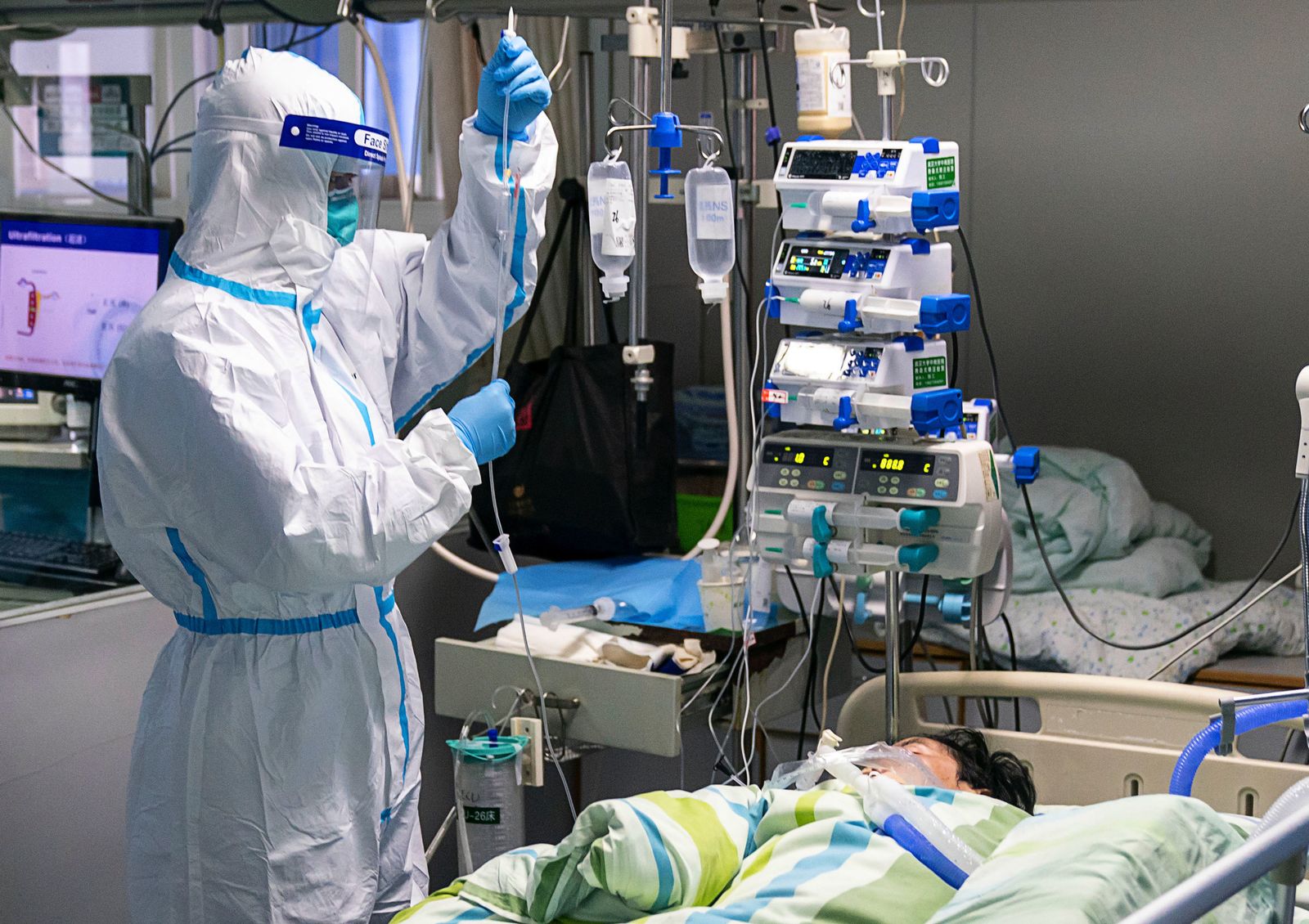 A medical worker at an intensive care unit.