German journalist Günter Wallraff has accomplished a lot in his career. He has revealed to the German public how so-called "guest workers," immigrants from Turkey, Greece, Italy, Spain and other countries who came here in the 1950s and 60s and stayed, are discriminated against in this country, the questionable working methods of Bild, the country's top-selling tabloid newspaper, and how call-center employees are exploited. His latest project also seems like a noble one. "I want to find out," he says, "what it's like to be black in Germany."

The project involves both a book, "Aus der schönen neuen Welt" ("Out of the Beautiful New World"), and a film, "Schwarz auf Weiss" ("Black on White"), which will be released in theaters in Germany on Thursday. As part of the film, Wallraff has a makeup artist cover him in dark brown makeup, he wears brown contact lenses and he dons an afro wig. Then, using the alias Kwami Ogonno, he takes a trip across Germany. He goes to a soccer game in the eastern city of Cottbus, attends a city festival in Magdeburg, tries to secure a place to pitch a tent in campground in the Teutoburg Forest and takes his German shepherd to dog training in Cologne. 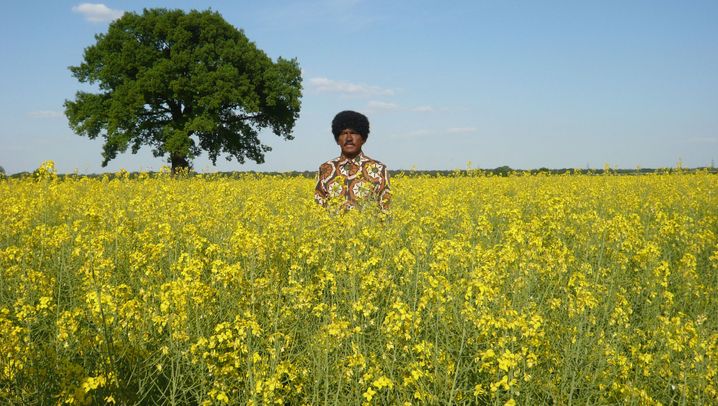 Photo Gallery: New Film on Being Black in Germany

The film reveals the frightening degree of both blatant and latent racism in Germany. When he goes to festivals, people refuse to drink beer on the same bench. Landlords refuse to rent apartments to him. People seem to have no compunction about calling him the German word for "negro." And hooligans in Eastern Germany even threaten him with physical violence.

Reception in the Black German Community

There's just one odd thing about the movie: If Wallraff really wanted to find out what it's like to live as a black in Germany, why didn't he take the time to let any blacks living in Germany answer the question?

Wallraff's modus operandi is to go undercover and film it to help show and tell what he experiences. He became famous for his 1977 film in which he infiltrated Bild under the alias of Hans Esser. Six years later, he disguised himself as the Turkish guest worker Ali Levent. But is this method appropriate for his new subject matter?

Black Germans are on the fence about the film. "We find the mindset behind Mr. Wallraff's film very problematic," says Tahir Della, a spokeswoman from the Initiative of Black People in Germany (ISD). "As is so often the case, someone is speaking for rather than with us." Noah Sow, an educator and musician associated with the media watchdog organization Der braune Mob (The Brown Mob), even goes so far as to accuse Wallraff of "making money from our suffering" regardless of whether he "really intends to combat (racism) or not."

There's something odd about how Wallraff handles the issues of racism in his movie and book as compared with how he handles his other journalistic excursions. For example, in the book's chapter on homelessness, his conversations with several homeless people -- including Manfred, the software entrepreneurs, Walter, the truck driver, and Timo, the high school dropout -- take up several pages. But you'd be hard-pressed to find the transcript of a conversation with anyone black.

Granted, in one episode in the film, Wallraff talks about the stories blacks who have been discriminated against in various German administrative offices shared with him. And then he dons his disguise to see what it's like for himself. Accompanied by Avad, a black German, he tries to sign up to take the exam to get a hunting license. But the bureaucrats react aggressively to his request and refuse to provide him with information about the test. Avad doesn't say a word, though, and he is never asked what it's like when public servants refused to help him land a job. In the end, Wallraff pushes him out of the picture, too.

The State of the Debate

The main criticism levied against Wallraff's film is that it fails to portray the debate about racism against blacks in Germany as being as advanced as it really is. For example, Della criticizes the film for "making absolutely no mention" of how much blacks in Germany have organized themselves. "We're happy that racism is discussed," he says, "but black groups have been doing the same thing for over 25 years."

Sow has a similar criticism. "Wherever you look," he says, "whether it's in academia, publishing or the annual reports of anti-discrimination offices, knowledge about everyday racism is present -- and accessible with the click of a mouse." He adds that: "Whites just have to stop ignoring and doubting these findings." As he sees it, the only reason Wallraff succeeds in drawing attention to the plight of Kwami Ogonno is that he is "privileged in the racist system (over) research results, publications and testimonials produced by blacks."

The stories of black Germans have been portrayed in films, books and songs for many years. In 2006, the documentary "Black Deutschland" was released, which featured leading black Germans in the artistic community speaking about how blacks are perceived by themselves and others. In 2007, the black German actress, television host and film director Mo Asumang released "Roots Germania," a film about her search for her family's roots. And, in 2009, black German rapper Samy Deluxe released an album and book entitled "Dis wo ich herkomm" ("That's Where I'm From"), both of which present a controversial examination of his relationship with Germany, his native country.

In response to such criticisms, however, Wallruff complains that "unfortunately, too few people either watch or read" these works. "It'd be much better," he adds, "if they enjoyed a wider audience."

What Is True in True-to-life?

While conducting research for his film, Wallraff even contacted the ISD to obtain reports about the experiences of blacks in Germany. He also consulted with Mouctar Bah, a prominent black human rights activist in Germany. But neither Bah nor any other blacks are interviewed as part of the film's on-screen action.

"That would have made it another film," Wallraff told SPIEGEL ONLINE. "As is the case in all of my roles, its about experiencing a situation at the gut level." He also believes that it was completely appropriate to use is undercover method when treating this issue as well. "My approach makes everyday racism comprehensible for Germans," he says -- meaning, of course, white Germans.

When he played a Turkish guest worker living in Germany 25 years ago, Wallraff gave both a voice and a face to a segment of society that, at the time, was hardly represented in the German media at all. In 2009, as can be seen with the examples of Mo Asumang, Samy Deluxe and many others, black Germans have firmly established a presence in the public eye. But Wallraff pointedly chose not to place his Kwami character in the professional world. "With my Ali character, I wanted to expose discrimination in the world of work," Wallraff says. "But, with Kwami, I purposefully chose a character that could help people primarily see the kind of racist things that happen in everyday life."

A Failure to Make Subtle Differentiations

One of the things that Wallraff makes clear in his film is how the lines between race and class discrimination become blurred. For example, when he goes about as Kwami Ogonno wearing no jacket, carrying only a plastic bag and speaking broken German, he is usually treated like anyone else who is economically marginalized. But when he dresses stylishly and speaks German without an accent when visiting an expensive watch store in Düsseldorf, he is treated with the utmost courtesy.

When he delivered his speech on racism in 2008, then-presidential candidate Barack Obama touched upon this issue of how race and class conflicts often get tangled up together. He spoke about "the resentments of white Americans" who feel threatened by gains made by blacks in American society. He went on to say that "to label (white Americans) as misguided or even racist without recognizing they are grounded in legitimate concerns (also) widens the racial divide and blocks the path to understanding." In the end, he concludes that they would both benefit more by fighting together for more opportunities.

In his film and book, however, Wallraff fails to reach this sort of subtle differentiation. In the film, he particularly complains that, as a black man, he is "always defined exclusively based on the color of his skin." "When you're black," he says in one of the film's few moments of commentary, "people don't focus on or even recognize what really makes you a person."

Still, he also seems to commit this same fault of over-simplification in his film. "In my role, I usually just made do without any personal history," he says. "I was simply just 'the other,' 'the black other.'"

6 Bilder Photo Gallery: New Film on Being Black in Germany 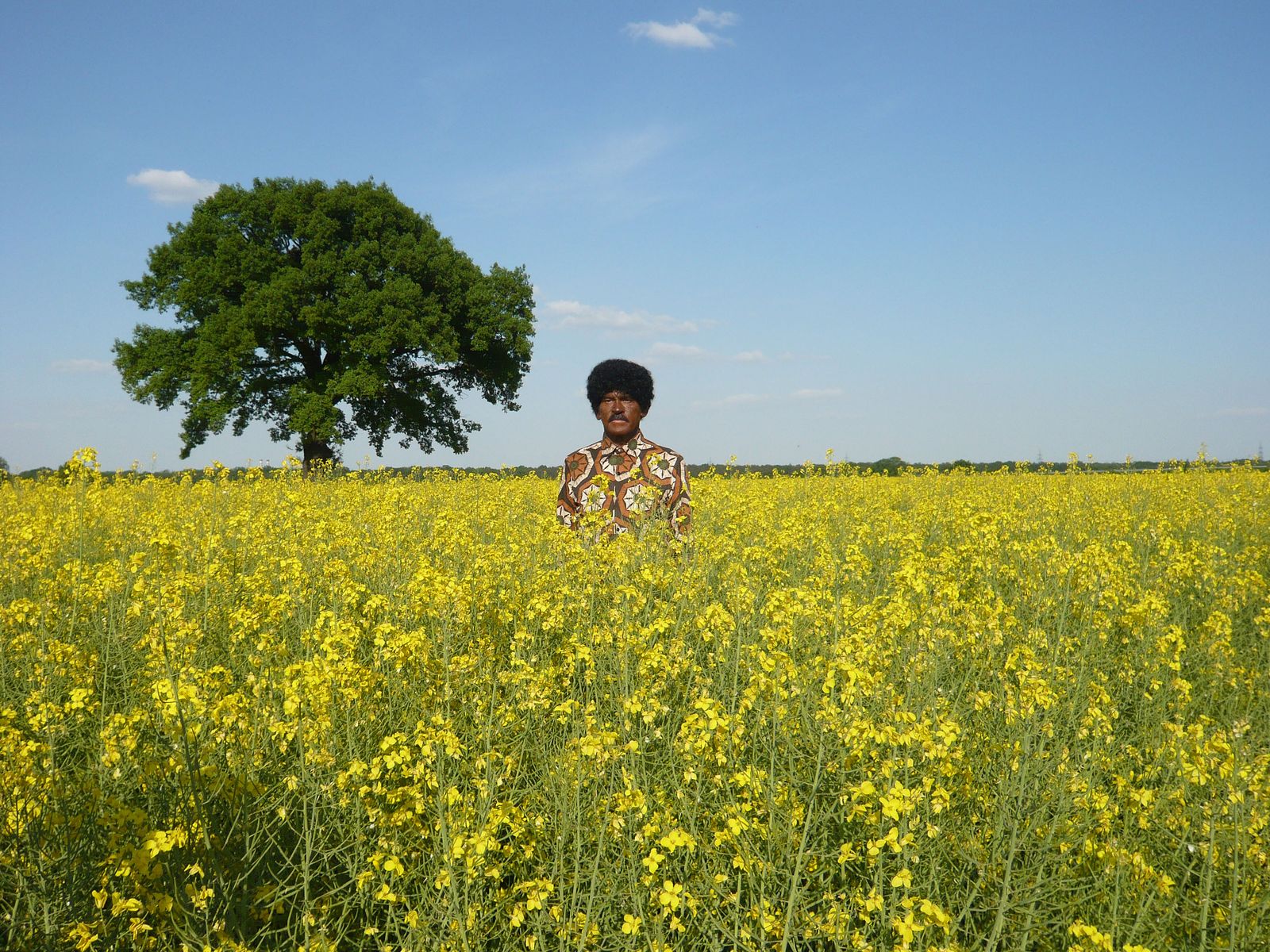 Günther Wallraff, Germany's most famous investigative journalist, has a new film -- "Black on White." As part of the film, he has a makeup artist cover him in dark brown makeup, he wears brown contact lenses and he dons an afro wig. Then, using the alias Kwami Ogonno, he takes a trip across Germany to discover for himself what it's like to be black in Germany.