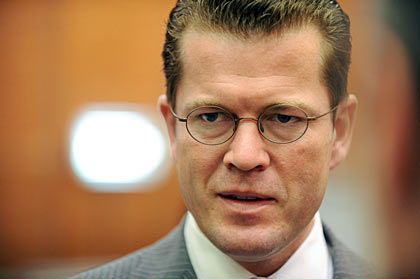 The firm, Linklaters, has more than 2,000 lawyers in offices around the world and is a leading player in the mergers and acquisitions game. With offices in Berlin, Düsseldorf, Frankfurt and Munich, it has represented some of Germany's biggest companies as they tried to weather the recent economic crisis.

Perhaps it was its expertise in the field that led Guttenberg, a member of the conservative Christian Social Union -- the Bavarian sister party to Chancellor Angela Merkel's Christian Democrats -- to hire the firm this spring to write a draft law that would make it possible for the state to help banks in crisis. Apparently Guttenberg was pleased enough with the results that he passed the 28-page draft on to his colleagues in Merkel's cabinet without alterations.

The point of the law is to create legislation that would allow the government to take steps to stabilize a buckling institution without having to go as far as nationalizing a bank. The government's moves earlier this year to nationalize Munich's Hypo Real Estate (HRE) raised eyebrows in a country where the expropriation of property has uncomfortable historical associations with the Nazi regime and, later, the East German communists.

Critics claim there is a conflict of interest in hiring Linklaters. The company has had numerous major German banks as clients, including the massive IKB Deutsche Industriebank, a commercial lender the government was later forced to bailout to the tune of billions. The firm helped IKB sell more than €2.6 billion worth of credit products in late February, just weeks before it began working on the draft law for the ministry.

"Either the ministry isn't in a position to take care of it or Guttenberg doesn't trust his own people to do anything," Wolfgang Wieland, a member of parliament for the Green Party, told SPIEGEL ONLINE. "Hiring a law firm that makes its money advising banks in trouble is a lot like hiring the frogs to drain the swamp," Many are also asking why a ministry with 1,800 employees needed to hire an outside firm to write a law in the first place.

For their part, officials at the Economics Ministry have argued that their internal legal team was overwhelmed at the time, and the decision to hire outside experts was made in the interest of expediency. And on Wednesday, a spokesman for Chancellor Angela Merkel also stepped in, saying the government could see no misdoing in Guttenberg's actions. Government spokesman Ulrich Wilhelm said it had been standard practice in Germany and abroad for decades to draw in external experts.

But independent experts aren't buying it. "Having a law written by an outside law firm is basically a declaration of bankruptcy on the part of the ministry," said Ulrich Battis, a professor and legal expert at Berlin's Humboldt University. "Everyone knows this law won't be passed before the parliamentary elections (in September)."

This isn't the first time outside experts have been brought in to guide government policy. In 2008, international law firm Freshfields Bruckhaus Deringer was retained to help orchestrate the state takeover of failing mortage bank HRE.

But Guttenberg's case is different, critics say, because he took the draft law from the firm and passed it on unaltered. "When a minister takes the suggestion of a law firm and adopts it as the position of his ministry without making any changes, it raises suspicions that he's just a front for lobbyists," Carsten Schneider, a member of parliament with the center-left Social Democratic Party (SPD), told SPIEGEL ONLINE. "The minister's actions are uncollegial and unprofessional."

The effort has also angered German Justice Minister Brigitte Zypries, also with the SPD, since both ministries were supposed to draft legislation. "It's irresponsible to commission a large firm instead of using the available expertise within the government," Zypries told the Berliner Zeitung newspaper, calling it a waste of "taxpayer's money."