Pop music plays over vacation pictures that cut between idyllic mountains and blindingly white beaches in a video clip advertising "Adventure Camps" run by the Bundeswehr, Germany's armed forces. Teens participating in the camps can travel in a "real army plane" to Sardinia, where they can take part in "crazy water battles," it says. Or they can take a train into the mountains, where they can rappel down "dizzyingly high cliffs." The colorful, cheery campaign on German teen magazine Bravo's website, which is also the Bundeswehr's media partner for the project, is clearly an attempt to make an army career appealing to a new generation of young Germans.

But this form of advertizing targeted at teens is "absolutely unacceptable," says children's aid organization Terre des Hommes. "This misleading advertisement in youth media violates the principles of the United Nations Convention on the Rights of the Child, and the particular duty a government has to protect children," says Ralf Willinger, an expert on children's rights with Terre des Hommes. Despite repeated inquiries from SPIEGEL ONLINE, the Bundeswehr has not yet responded to the accusations.

Critics of the "Adventure Camp" advertisement are particularly troubled by the fact that the Bundeswehr's campaigns hit upon what they see as a weak point in the German school system. "We believe there's a need to strengthen peace education," Willinger says, referring to the importance the UN Convention on the Rights of the Child places on the issue. "Currently, depending on which school you look at, this is happening not at all or very little." Willinger finds it problematic that the Bundeswehr is targeting its campaign at school kids in particular. "We're not saying the Bundeswehr shouldn't advertise at all. But they should leave children alone," he says.

In an additional protocol to the Convention on the Rights of the Child, Germany made a commitment not to recruit minors to the army, unless they were at least 17 years old and had been "comprehensively informed of the responsibilities associated with military service."

Children's rights activists question whether the Bundeswehr is providing full disclosure here. The advertising campaign suggests that Bundeswehr deployments are akin to adventure trips, says Roland Blach, manager of the German Peace Society for the southern state of Baden-Württemberg. Together with several partners, his organization founded the "No School for the Bundeswehr" campaign, which advocates against Bundeswehr youth officers visiting the country's schools. "The Bundeswehr doesn't talk to kids about what having to go to war means," Blach says, referring to the video clip.

This August, two armored infantry battalions from Regen, Bavaria, and Marienberg, Saxony, organized summer camps. More than 80 teenagers and young adults decked out in camouflage took part, riding in armored vehicles, climbing around a ropes course and camping outdoors. According to the Bundeswehr, the camp in Marienberg was organized in response to frequent requests from teens interested in internships.

'It's Not an Adventure'

Since Germany ended military conscription last year, the Bundeswehr has had to work harder to woo new recruits. For decades, military service counselors and youth officers have visited German schools and informed students about a career with the German army. But now the Bundeswehr has opened its first career counseling offices, and is increasing its advertising efforts across various media. "The Bundeswehr's advertising is becoming more intensive, both quantitatively and qualitatively," criticizes children's rights activist Willinger. He sees the current videos as reaching a new level, with the campaign focusing solely on the aspect of easygoing vacation fun and, unlike past videos, lacking any images of Bundeswehr missions. "I haven't seen anything like this before," Willinger says.

Ulla Jelpke, the Left Party's spokesperson on domestic affairs, also criticizes the teen magazine. "Bravo should terminate this agreement with the Bundeswehr and focus instead on informing its readers about the horrors of war," she says, adding that by participating in this sort of campaign, the magazine allows itself to be made into "a lackey for the Defense Ministry's marketing strategists."

Agnieszka Brugger, the Green Party's spokesperson on disarmament policies, calls the campaign an unacceptable way to obtain new recruits. "In the most extreme cases a job with the Bundeswehr can potentially be fatal, and it's not an adventure," Brugger says.

Bravo itself is unperturbed by the accusations. "Responsibility for advertising content lies with the customer placing the advertisement, in this case the Bundeswehr," says a Bravo spokesperson. "As we see it, the Bundeswehr is part of a democratic society and an important employer offering a wide range of skilled professions."

The magazine's publisher Bauer Media Group has been working together with the Bundeswehr on advertising for several years, the spokesperson adds, and has no moral qualms. The group's guidelines for customers placing advertisements "are strictly aligned with legal and ethical requirements." If, however, the campaign turns out to be in violation of UN guidelines, the spokesperson says, then Bravo will need to consider a different course of action. 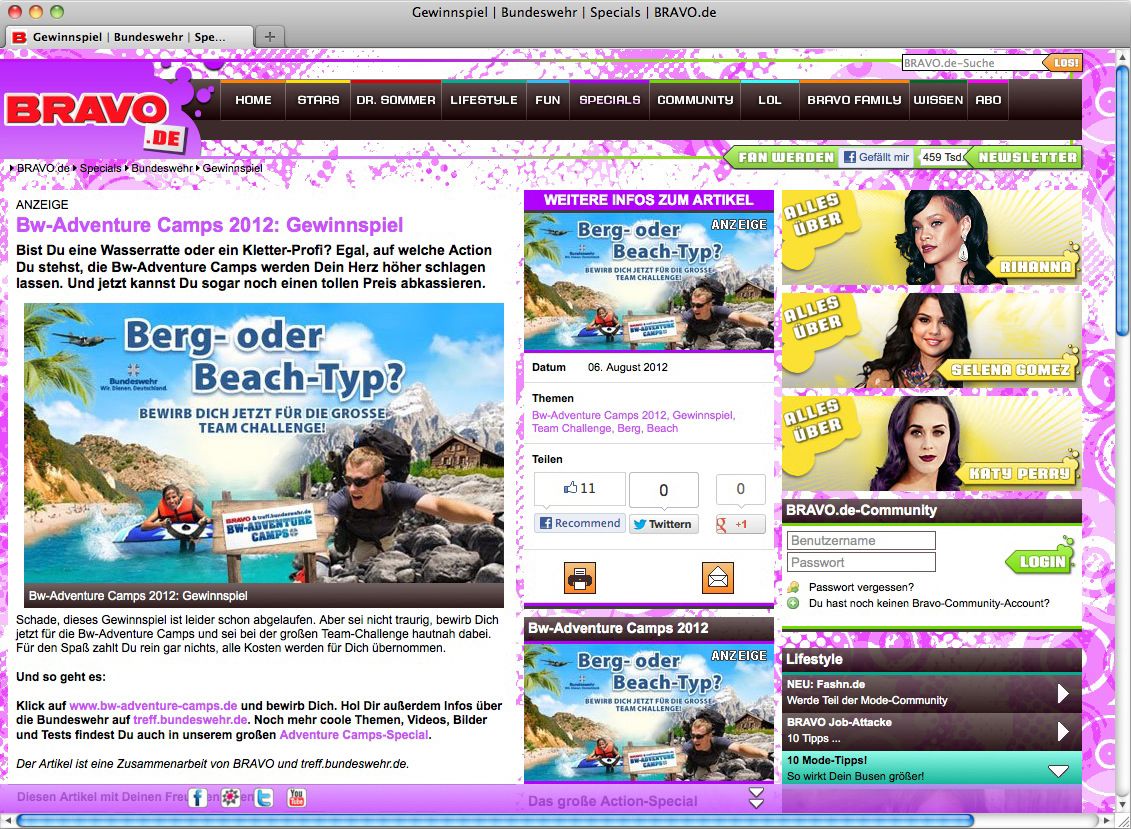