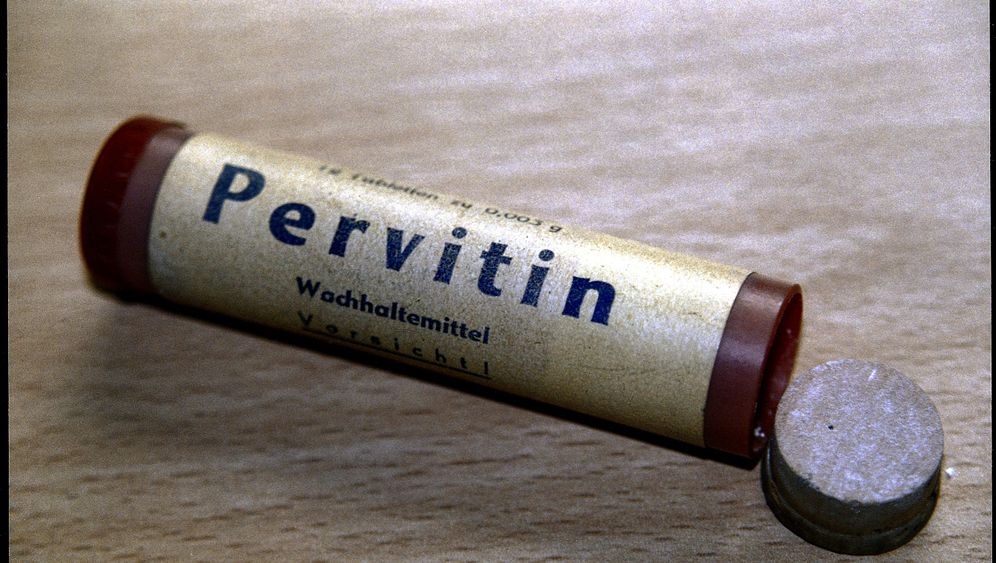 "Alertness aid" read the packaging, to be taken "to maintain wakefulness." But "only from time to time," it warned, followed by a large exclamation point.

The young soldier, though, needed more of the drug, much more. He was exhausted by the war, becoming "cold and apathetic, completely without interests," as he himself observed. In letters sent home by the army postal service, he asked his family to send more. On May 20, 1940, for example, he wrote: "Perhaps you could obtain some more Pervitin for my supplies?" He found just one pill was as effective for staying alert as liters of strong coffee. And -- even better -- when he took the drug, all his worries seemed to disappear. For a couple of hours, he felt happy.

This 22-year-old, who wrote numerous letters home begging for more Pervitin, was not just any soldier -- he was Heinrich Böll, who would go on to become one of Germany's leading postwar writers and win a Nobel Prize for literature in 1972. And the drug he asked for is now illegal, notoriously so. We now know it as crystal meth.

Many TV fans are familiar with the drug primarily from the hit American series "Breaking Bad," in which a chemistry teacher with financial troubles teams up with a former student to produce meth by the pound, while drug enforcement agents chase drug rings in the oppressive New Mexico heat.

Meth use is also on the rise in real-life Germany. According to the latest official reports, the country saw more first-time users over the last year than ever before. In fact, the number of known cases skyrocketed from 1,693 to 2,556 within a single year. Use of the addictive drug has been increasing in Germany since the mid-1990s, with most of it coming into the country from the neighboring Czech Republic.

It was in Germany, though, that the drug first became popular. When the then-Berlin-based drug maker Temmler Werke launched its methamphetamine compound onto the market in 1938, high-ranking army physiologist Otto Ranke saw in it a true miracle drug that could keep tired pilots alert and an entire army euphoric. It was the ideal war drug. In September 1939, Ranke tested the drug on university students, who were suddenly capable of impressive productivity despite being short on sleep.

From that point on, the Wehrmacht, Germany's World War II army, distributed millions of the tablets to soldiers on the front, who soon dubbed the stimulant "Panzerschokolade" ("tank chocolate"). British newspapers reported that German soldiers were using a "miracle pill." But for many soldiers, the miracle became a nightmare.

As enticing as the drug was, its long-term effects on the human body were just as devastating. Short rest periods weren't enough to make up for long stretches of wakefulness, and the soldiers quickly became addicted to the stimulant. And with addiction came sweating, dizziness, depression and hallucinations. There were soldiers who died of heart failure and others who shot themselves during psychotic phases. Some doctors took a skeptical view of the drug in light of these side effects. Even Leonardo Conti, the Third Reich's top health official, wanted to limit use of the drug, but was ultimately unsuccessful.

Pervitin remained easy to obtain even after the war, on the black market or as a prescription drug from pharmacies. Doctors didn't hesitate to prescribe it to patients as an appetite suppressant or to improve the mood of those struggling with depression. Students, especially medical students, turned to the stimulant to help them cram through the night and finish their studies faster.

Numerous athletes found Pervitin decreased their sensitivity to pain, while simultaneously increasing performance and endurance. In 1968, boxer Joseph "Jupp" Elze, 28, failed to wake again after a knockout in the ring following some 150 blows to the head. Without methamphetamine, he would have collapsed much sooner and might not have died. Elze became Germany's first known victim of doping. Yet the drug remained on the market.

In the 1960s, the Temmler Werke supplied the armies of both East and West Germany with the stimulant pills. Not until the 1970s did West Germany's postwar army, the Bundeswehr, remove the drug from its medical supplies, with East Germany's National People's Army following in 1988. Pervitin was ultimately banned in all of Germany, but its meteoric rise as an illegally produced drug had only just begun.

The drug's new career came thanks to an American cookbook. In the United States, where meth use is widespread today, illegal methamphetamine was initially more an exception than the rule. Then, starting in the late 1970s, motorcycle gangs such as the Hells Angels discovered crystal meth as a source of income and began setting up large-scale drug labs. But since they targeted mainly the California cities of San Francisco and San Diego as their market for the drug, the problem remained limited mainly to the West Coast.

Methamphetamine was no longer a powder compressed into tablets, but instead sold in crystal form, and few people knew how to produce these crystals. That changed when a mad-scientist type named Steve Preisler, alias "Uncle Fester," a chemist in Wisconsin in the mid-1980s, published a drug "cookbook" entitled "Secrets of Methamphetamine Manufacture."

In this controversial book, now in its eighth edition, Preisler presented six different recipes for preparing the drug. All called for only legal ingredients, using a simple chemical reaction to extract the drug's principal component from cough medicine, then combining it with liquids that increased its effectiveness, such as commercially available drain cleaner, battery acid or antifreeze.

More and more illegal meth labs began to spring up, producing the drug in normal apartments, isolated cabins or hotel rooms. Meth production creates highly toxic, explosive substances, and it's not uncommon for improvised drug labs to explode or for drug-addicted mothers to store the drug's dangerous components in the refrigerator next to baby food and end up poisoning their children.

There are a shocking number of these "private laboratories." According to the US Drug Enforcement Administration (DEA), around 11,000 meth labs were discovered in the country in 2010, compared to 7,530 in 2009. Of those, 2,000 were in Iowa, an agricultural state known as part of the country's "bread basket."

Meth can be snorted, smoked, swallowed or injected, with addicts often consuming 1,000 times the dose once taken by Wehrmacht soldiers during World War II. The side effects are alarming. Meth weakens the immune system, which leads to eczema, hair loss and so-called "meth mouth," in which the teeth fall out and mucus membranes rot. Meth addicts experience extreme weight loss and develop kidney, stomach and heart problems, which have a nightmarish combined effect: Before and after pictures of meth addicts show that they come to look like living corpses within an extremely short span of time.

Despite these terrible side effects, it seems the drug has lost none of the appeal to which Heinrich Böll succumbed. In 2011, the National Institute on Drug Abuse, based outside Washington, estimated that around 13 million Americans had tried meth at some point. The UN estimates around 24 million users globally.