A poll released Friday indicates Germans know little about the current euro crisis -- but are overwhelmingly opposed to the way it is being handled by German Chancellor Angela Merkel and French President Nicolas Sarkozy, the two leaders spearheading efforts to solve the crisis.

The survey of 1,001 Germans conducted for the public broadcaster ARD by pollster Infratest Dimap found that three-quarters of Germans were either not very confident or not at all confident in Merkel's leadership during the euro crisis. Only 22 percent said they had strong faith in her leadership.

Those surveyed had even less confidence in Sarkozy. While 83 percent expressed doubts in his leadership, only 15 percent voiced approval.

Despite their poor views of Merkel's and Sarkozy's crisis-management skills, respondents to the German poll also indicated they had a hard time grasping what the crisis was all about. While 27 percent claimed to understand what is happening, 71 percent admitted to being either partially or completely in the dark about the technical reasons behind the crisis.

Despite finding dismal approval ratings on Merkel's handling of the crisis, the same poll found increasing support for her conservative coalition, made up of her center-right Christian Democratic Union (CDU), its Bavarian sister party, the Christian Social Union (CSU), and the business-friendly Free Democratic Party (FDP). Compared with figures from an Aug. 4 poll, support for the CDU/CSU increased from 32 percent to 34 percent, while the FDP gained one percentage point to reach 5 percent.

At the same time, the Green Party -- which enjoyed a surge in support following the Fukushima nuclear disaster in Japan -- saw its support drop from 23 percent to 21 percent. Likewise, both the center-left Social Democratic Party (SPD) and the left-wing Left Party lost a percentage point to reach 27 percent and 7 percent, respectively.

Given these figures, the parties in the ruling coalition enjoy 39 percent of the population's support, while the pairing of the SPD and the Greens, which governed in a coalition between 1998 and 2005, has 48 percent.

Trouble in the Coalition

Merkel's leadership also continues to face criticism from within the ranks of her own coalition. In the Friday edition of the mass-circulation daily Bild, Michael Fuchs, the CDU/CSU's deputy floor leader in parliament, said he admired Merkel for her courage, but believed that: "The frogs in euro-zone countries needed to drain their debt swamp by themselves."

The FDP, meanwhile, continues to be openly critical of the idea of introducing so-called euro bonds which would be jointly issued by all 17 countries in the euro zone. At a press conference held in Paris on Tuesday after a summit with Sarkozy, Merkel stated the bonds were not among the solutions currently under consideration. But even this announcement has failed to calm FDP worries about their potential introduction.

FDP leader Philipp Rösler, who is also German economy minister, was quoted in the regional paper Mittelbayerische Zeitung on Friday as saying that his party "is and will remain a reliable coalition party." But he also stressed that the FDP would "not accept having German taxpayers pay for the debts of other countries." 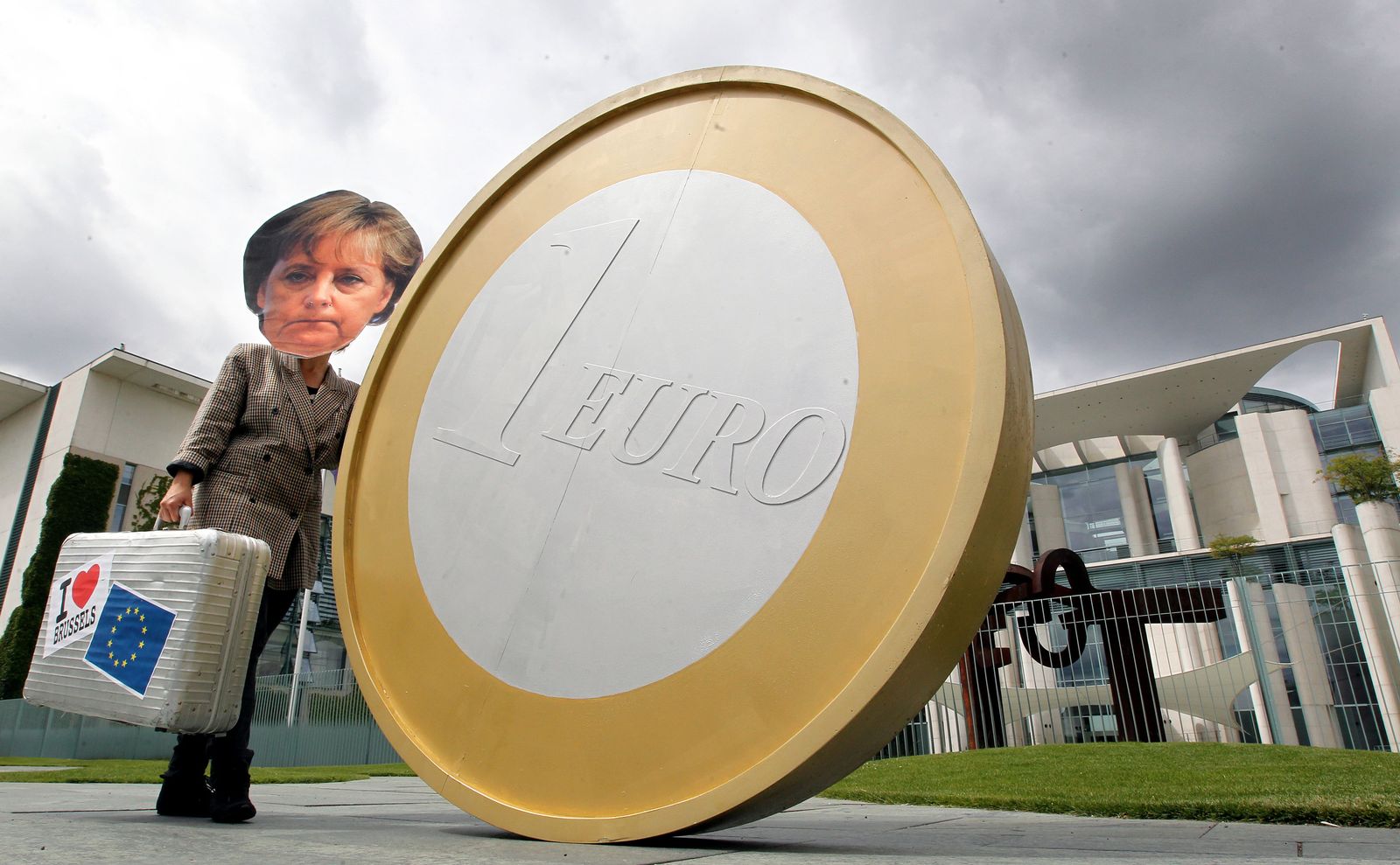 In a photo from June, an activist wearing a mask bearing the face of German Chancellor Angela Merkel demonstrates outside the Chancellery in Berlin.