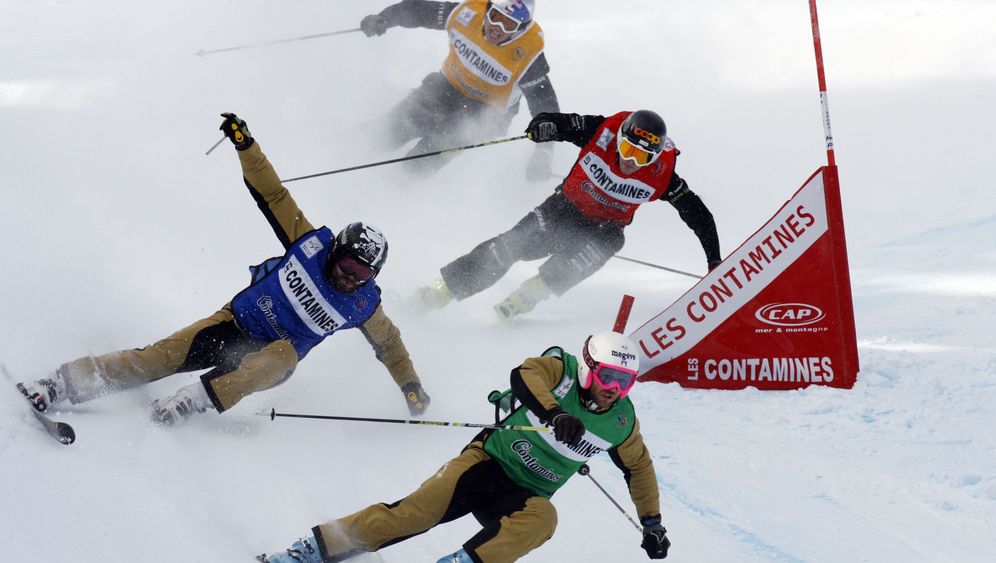 He might be one of Germany's best medal hopes for the upcoming Winter Olympics but he still has to explain his jokes -- especially the one about the padded cell. "Now I need a padded cell," ski-cross champion Simon Stickl joked straight after winning a race in Austria in early January that made him the first German male to qualify for the ski-cross event at the upcoming Winter Olympics. Four female skiers have also qualified. Nobody could figure out Stickl's joke. "In the team, we always made jokes about locking ourselves away as soon as we had qualified for the Olympics," Stickl told SPIEGEL ONLINE. "Just so that nothing could happen to us. Because our sport is so dangerous."

He's not wrong. Skiers competing in events such as the giant slalom or downhill races travel at high speed but they travel alone on a course, most often racing the clock and reaching speeds of around 130 kilometers per hour (80 miles per hour) or more. Ski cross, which is considered part of freestyle skiing (freestyle also includes racing through moguls and ski jumping) and which is the only new Winter Olympic sport to be introduced this year, is even more dangerous.

This is mainly because skiers travel at the same speed as they do in those other ski events but they all race together. Each ski-cross race features four skiers. And there are also obstacles on a ski cross course, such as bends, rollers, jumps and banks. Often skiers will be clearing these obstacles together -- jumping increases your speed and a correctly timed jump can put you meters ahead of the competition. As the skiers make those jumps there may only be centimeters between them -- and that is while they are in the air. This is why a typical ski-cross race, which might last under a minute, often results in injuries. Skiers traveling at high speeds and over such obstacles can hardly avoid physical contact, either with each other or with obstacles.

At the race in St Johann in Austria where Stickl, 22, and two other German skiers Anna Wörner, 20, and Heidi Zacher, 22, qualified for the Olympics, the rescue helicopter had to be called four times. After the race, Stickl spoke of "extreme conditions." And the German team has not gone unhurt. In December Maximilian Pupp, who had been Germany's leading Olympic contender for ski cross, broke his ankle in a collision and was temporarily confined to a wheelchair. And Alexandra Grauvogl, the prime female contender, is also out for the rest of the season with an injured knee. Basically, the athlete who chooses ski cross cannot guarantee that he, or she, will finish the season's racing uninjured.

After his surprise win at St Johann, Stickl sounded a little bit shocked but that's not really surprising -- he has already achieved his season goal and we are only halfway through winter. "Of course we wanted to qualify for the Olympics early on," Stickl said, "but so early on, and then also with a World Cup win, that's just crazy." His teammates were not as surprised. After the qualifying rounds, during which Stickl had led, they had placed bets on him to win. "You're nuts," Stickl told them. But that evening it was Stickl buying the drinks.

The way things stand at the moment it is Stickl who presents Germany with their best medal potential for ski cross at the Winter Olympics. During the previous winter Stickl's best result had been 28th but his results in Austria lifted him to number three on the World Cup ski cross rankings. The World Cup rankings are made up of results from competitions held in various winter locations and count towards Olympic qualifications. He also beat other high-ranking ski cross racers including American skier Daron Rahlves, who has been world champion in speed skiing disciplines several times and is one of the prime US contenders for a ski cross medal. Rahlves came second.

World Cup trainer Alexander Böhme has known Stickl, who comes from Bad Wiessee, an alpine town in Bavaria, for three years. "He was a talented young guy from the beginning," Böhme told SPIEGEL ONLINE. "He's a relaxed kind of guy who knows how things work." And the trainer believes that Stickl will use the positivity that has resulted from his win but will keep his feet --and skis -- on the ground.

"He knows he has to keep skiing a clean race," Böhme notes. One accident and the Olympic qualification becomes worthless. Additionally, although there might appear to be jostling on the race track between skiers, no pushing or shoving is actually allowed -- any illegal contact can lead to disqualification. In fact, the World Cup race that followed Stickl's Austrian win has already shown how precarious a ski cross race can be. In the quarter finals at Les Contamines in France, Stickl lost a ski and was forced to limp toward the finish line on the other ski. He eventually placed 12th.

At the same event another German ski cross racer, Julia Manhard, 23, reached the quarter finals and by doing so, also qualified for the Olympics in Vancouver next month.

This is Ski Cross' "Big Chance"

For Heli Herdt, Stickl's win and the good results by the female ski cross racers in the team is about more than just Olympic qualifications. It is a justification. Herdt is the head of ski cross racing for the German Ski Association (DSV), the national governing body for skiing, and he says that Stickl's qualification shows that "we are all highly professional athletes. People should be able to see how fascinating our sport is," he says. "This is our big chance."

Even though the International Olympic Committee made ski cross an official Olympic discipline in 2006, paving the way for the sport to debut in Vancouver next month, this branch of skiing is not well known in Germany. Part of this may be due to the fact that there's been no obvious representative of the sport, no national hero of ski cross to celebrate. Which is why Stickl's win is particularly important.

"This is the perfect time for it (such a win), just before the Olympics," Herdt says and points out that several other German male skiers have also almost qualified for the Olympics: Thomas Fischer, Andreas Schauer and Matthias Wölfl have half the points they need to get to the Olympics. In the next few World Cup events they need to finish in the top 16. "And now they're all thinking: Simon won, so why can't I?" Stickl says.

And it's true, the peak of ski cross racing is crowded. "In Innichen (in Italy) there was just over one second between first place and 30th place," Böhme explains. "So anything can happen."