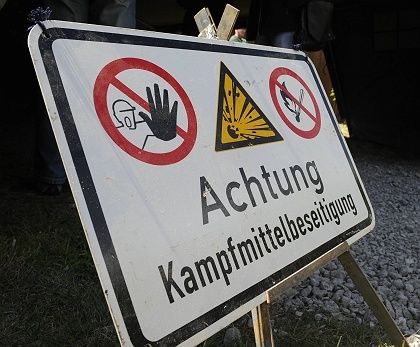 A sign warns against the dangers of unexploded munitions.

It's not uncommon for kids to bring home unusual finds, such as a lost puppy. But things are a lot less cute when the discovery turns out to be a high-explosive shell from World War II.

On Tuesday evening, one 10-year-old boy was playing on the edge of a field near his home in the central German city of Kassel when he found a cylindrical metal object about 25 centimeters (10 inches) in length and 7.5 centimeters (3 inches) in diameter, according to statement released by police. The boy brought the "toy" home Wednesday morning and showed it to his father, who immediately telephoned the police.

Upon examining the object, the police notified the state weapons disposal service. Contractors of the service identified the article as a high-explosive shell from World War II, before safely transporting it to a dedicated weapons-disposal facility, where it was destroyed.

The boy lives in an area where munitions are found almost daily, according to Gerhard Gossens, a spokesman for Hesse's weapons disposal service. "There was a munitions factory nearby that was bombed by the allies at the end of the war," Gossens told SPIEGEL ONLINE Wednesday. "Munitions flew everywhere."

Gossens said that in the state of Hesse alone, 230 tons of World War II-era weapons and munitions were found in 2007 -- over 60 years after the end of the war.