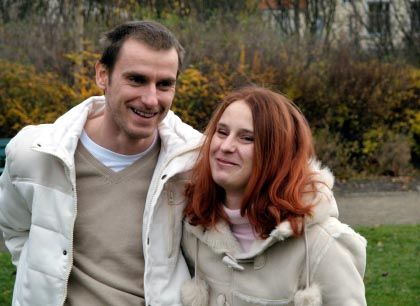 Brother and sister, and lovers with four children. Patrick and Susan from Leipzig.

At first sight they look like an ordinary couple, strolling through the park with their child and their dog. But when the two adults hug each other their physical similarities are unmistakable. They have the same pronounced nose, the same blue-green eyes, and the same thin lips. Patrick S. and Susan K. are brother and sister. They are an incestuous couple.

Since Susan became pregnant with Patrick's child and their relationship became known to the authorities, they have been prosecuted repeatedly. Their case touches an age-old taboo, it's exotic and tragic at the same time. "Coitus between relatives" is illegal in German law and punishable with a fine or a jail sentence.

Patrick S. has served a jail sentence of more than two years because of his love for his sister, and he may have to go back to jail for at least another year, unless Germany's Federal Constitutional Court rules in his favor. The verdict is expected soon.

The key issue is whether the protection of a powerful moral taboo is sufficient justification for punishment. And whether there are reasons beyond that taboo for locking someone up, for depriving children of their father, a woman of her partner.

Some 2-4 percent of the population have "incestuous experiences", according to an estimate by the Freiburg-based Max Planck Institute. There are fewer than 10 convictions for incestuous sex in Germany per year.

Incest trials usually involve a father's abuse of an under-age daughter, which is punishable under a separate law on abusing minors. Even cases of incest between siblings that come to trial are usually based on sexual abuse charges.

But in cases of incest between two consenting partners like Susan K. and Patrick S. there is no victim to be protected. Theirs is a rare case. Patrick S. was born in Leipzig in 1976, the second of five children. His sister Susan K. was born eight years later, and he didn't meet her until he was 23.

The father was a violent alcoholic. When Patrick was three years old his father grabbed him and held a knife to his throat. Neighbors called the police and Patrick was taken into care before being handed to foster parents near Potsdam. His new family adopted him, but they eventually told him they weren't his real parents.

Patrick is a shy man. When he speaks, he frequently looks down at the floor, tells his story with few words and a soft voice. When he was 23 he went to the youth welfare office to find his real mother. A few days later she contacted him.

On May 20, 2000 he travelled to Leipzig to see his mother again for the first time in 20 years. His parents had separated long before and the mother had a new partner. The three other siblings have since died, and the 16-year-old girl staring at him wide-eyed across the living room table was his sister.

Susan K. is a bit slow mentally. She looks up to her brother because he seems so capable and experienced compared to her. He was only meant to stay for a week but Patrick's mother asked him to stay longer. He said yes. "I felt drawn there," he recalls. He gave up everything. A job in Berlin, a relationship with his girlfriend at the time, and moved into a four-room flat in an apartment block near Leipzig.

There was a stepbrother who had his own room, and Patrick and his sister shared a room. No one thought anything of it and the relationship at that time was still platonic, says Patrick. Suddenly, on Dec. 12, 2000, their mother died. She had heart problems but the exact cause of death was never found.

"We couldn't cope with losing our mother," says Patrick. Before her death his relationship with his sister was "quite normal," says Patrick. Afterwards "the connection between us grew stronger because we were the only remaining children of our parents." Initially no one appeared to notice that the relationship between the two had become intimate.

The phenomenon of incestuous desire is ages old, as is the taboo surrounding it. Napoleonic France stopped punishing incest in 1810 in the wake of the declaration of civil and human rights during French Revolution that the law only has the right to prohibit such actions that are damaging to society. It's impossible, or at least very hard to prove that consensual incest does such damage.

German law since 1973 has stated that punishing incest serves to protect families from destructive influences. But social research shows that incest is more likely to be the result of family problems than the cause. Eugenic aspects, which the German statue book cites regarding sibling incest, are a poor justification for punishment. The risk of hereditary disease for offspring also exists with other people with genetic defects. Yet the German constitution would scarcely forbid such people from having children.

It's the physical proximity of siblings as they grow up that helps to suppress sexual desire between them. But if close relatives only get to know each other as adults, this no longer applies. Patrick S. and Susan K. probably wouldn't have fallen in love if they hadn't grown up apart from each other.

In October 2001 Susan gave birth to their first child, a boy. A social worker suspected that her brother was the father and reported them to the police. In 2002 Patrick was first taken to court. He got a one-year suspended sentence. Then, they had a second child. The first two children are slightly physically disabled and are a little slow mentally as well. They were both taken into foster care. They then had a third child which had a heart problem, but which is now completely healthy after a heart operation.

In 2004 there was a second trial in which Susan K. was a co-defendant because she was 18 when the second child was conceived. Neither of them was assigned a defense lawyer. Patrick was sentenced to 10 months in jail. Susan was put under the supervision of a social worker for six months.

After his second conviction Patrick approached a lawyer who appealed against the verdict. Meanwhile Susan gave birth to a fourth child. It's healthy and she was allowed to keep it.

Both were put on trial again. Patrick got sentenced to one year and two months in jail, and his sister was again placed under supervision. An experienced lawyer then took over the case and managed to bring it before the Federal Constitutional Court. By November 2006 Patrick had served his second sentence. Only if the court now rules against his third sentence will he be spared a further jail term.