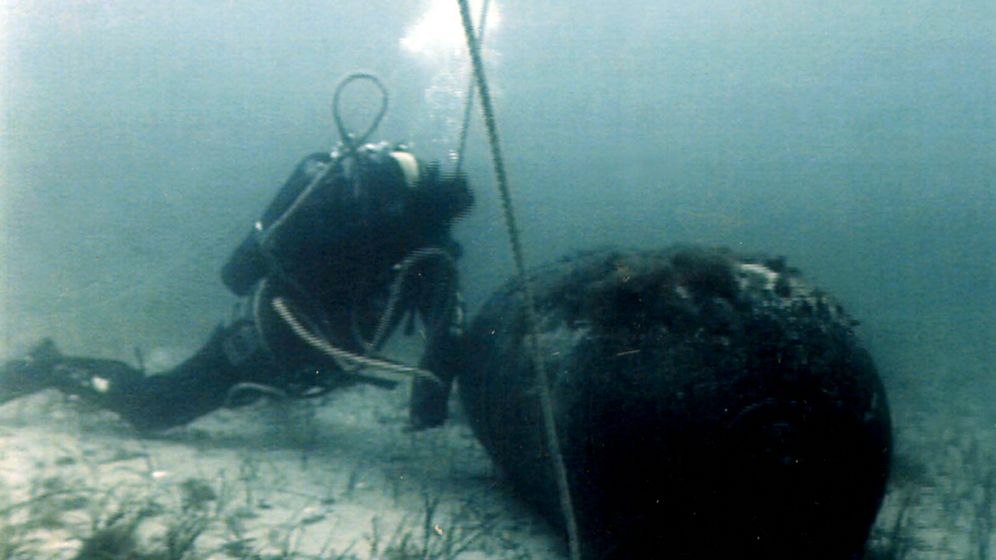 Photo Gallery: WWII Munitions in the North and Baltic Seas

Lorenz Marquardt has been sailing the Baltic Sea for more than 53 years, but the 68-year-old fisherman has an "uneasy feeling" whenever he leaves Eckernförde, in the northern German state of Schleswig-Holstein, for the Danish island of Bornholm.

An invisible threat lies dormant beneath him as soon as he reaches the rich fishing grounds around the island. To fish for cod, his cutter drags a bottom trawl through the Bornholm Basin, which is 60 to 70 meters (197 to 230 feet) deep -- in precisely the spot where tens of thousands of bombs and shells were sunk after the end of World War II.

Nautical maps identify the area above the bomb cemetery as "contaminated (munitions)" or "contaminated (gas munitions)," and warn: "Anchoring and fishing are hazardous." German and Danish Baltic Sea fishermen take the risk because they can return to port with up to 10 metric tons of cod on their best days. That translates into several thousand fish, weighing one to 10 kilograms apiece (two to 22 lbs.), and a very good catch can fetch €6,000 to €10,000 ($7,800 to $13,000), depending on the market price.

Years ago, Marquardt pulled a 500-kilo bomb onto his cutter, together with the floundering cod. He was lucky, because the bomb wasn't porous yet. Bomb disposal experts destroyed the bomb on land, in Eckernförde.

But since World War II, hundreds of Danish fishermen have been injured after pulling rusted shells containing mustard gas, which damages the skin, on board in their nets. The gelatinous material leaked from the metal shell casings, causing severe burns.

Almost seven decades after the end of the war, residual explosives that were hardly taken seriously for a long time are now coming to light in the North and Baltic Seas. Experts estimate that there are 1.6 million metric tons of conventional and chemical ammunition in German territorial waters alone, unexploded time bombs lying in or on the sea floor. The unexploded ordnance (UXO) includes giant aerial bombs weighing hundreds of kilograms, 15-kilo shells, small high-explosive shells, hand grenades, detonators and ammunition rounds, for a total of more than 50 million individual items.

No one knows how great the danger really is. "We are familiar with only a small portion of the areas contaminated with weapons," says Jens Sternheim, chairman of the "Munitions in the Sea" task force of the North and Baltic Sea Federal and State Committee. According to Sternheim, "munitions problems will increasingly come to light" during the construction of offshore projects, such as wind farms.

The problem was created both during and after the war. When the Allies disarmed the Germans after defeating them, they ordered that the weapons be disposed of at sea. Before that, the Nazis had occasionally sunk their own ammunition when, for example, they feared airstrikes against their poison gas storage sites.

There are more than 100 of these bomb and shell graveyards scattered along all of northern Germany's coastlines. There are also apparently 5,000 metric tons of shells filled with substances such as phosgene and the nerve agent tabun in the Little Belt, the strait between the Danish island of Funen and the Jutland Peninsula. A report that Munitions in the Sea released a year and a half ago and is now updated lists many well known beach resorts along German coasts.

If the UXO is washed onto land, is caught in fishing nets or is merely disturbed during preparatory work for pipelines and offshore wind farms, it can pose a danger to local residents, vacationers, fishermen and excavator operators.

Last year, munitions clearing crews working in the Ems River estuary found two sea mines, massive metal spheres containing up to 300 kilos of explosives, which were intended to sink enemy ships headed for Nazi Germany. The mines were detonated. In July 2012, a tourist on the North Sea island of Wangerooge found the warhead of a German torpedo, which was also subsequently destroyed in a controlled detonation. Anyone walking in the tidal flats of the Elbe River estuary near the port of Cuxhaven should be alert. According to the expert report, "the munitions components, some of them lying openly exposed in the tidal flats, are dangerous."

Explosions can happen almost anywhere. During construction work on the Riffgat offshore wind farm, about 15 kilometers (9 miles) northwest of the East Frisian island of Borkum, 2.7 metric tons of munitions were discovered and salvaged, and there are unexploded cluster bombs in the tidal flats south of Norderney, another East Frisian island. Walkers in the tidal flats near Kampen, a municipality on the North Sea resort island of Sylt, discovered two bombs in December 2012. The bomb disposal service assessed the find and detonated the two bombs after deeming them dangerous.

Beachgoers usually have no idea what can be washed up at their feet. In July 2012, two children from the southwestern state of Baden-Württemberg who were playing on the beach in Kalifornien, a town near the northern city of Kiel, brought a 1.5-kilo lump of material back to their parents' vacation house. Suddenly the hands, T-shirt, jacket and pants of one of the boys turned a yellowish orange. The lump consisted of Schiesswolle 39, an explosive compound that the German navy used in WWII torpedoes and can cause skin irritation. The boy was not injured.

Dangerous UXO also lies under important shipping routes. When a munitions clearing crew began working off the Baltic Sea resort town of Travemünde in 2011, it discovered, at a depth of 20 meters, six warheads from V1 flying bombs in or near the channel used by the large ferries that depart from Travemünde for Scandinavia or the Baltic countries. There is also UXO in the Flensburg Fjord, in Eckernförde and Hohwacht Bays and, farther to the east, in the northeastern state of Mecklenburg-Western Pomerania, in the Bay of Greifswald and off the islands of Rügen and Usedom (see graphic).

For decades, Germany's states paid almost no attention to the dangerous legacy from World War II. In the end, it was not even a German government agency, but Stefan Nehring, a marine biologist and environmental consultant from the western city of Koblenz, who discovered one of the worst munitions graveyards in 2008. He had spent several years digging through mountains of records in the Federal Archives in Koblenz and the affiliated military archive in the southwestern city of Freiburg. While doing research in London, he uncovered concrete evidence of an especially heinous environmental crime: In September 1949, the British military administration had ordered the Germans to drop about 6,000 field artillery shells into the North Sea four kilometers south of the Helgoland archipelago. The shells were filled with 11.7 metric tons of the nerve agent tabun.

"Until then, German authorities had been unaware of the reports from the British National Archives cited by Dr. Nehring," the Schleswig-Holstein state government noted. The toxic waste disposal site was even a target area for the German military's torpedo attack exercises in 2010. Ships bound for the Port of Helgoland also sail near the area.

The shells will probably remain on the sea floor until they disintegrate completely, at least according to a recommendation from Germany's Federal Maritime and Hydrographic Agency and the international Helsinki Commission, which is responsible for environmental protection in the Baltic Sea. The recommendation states that there is no concrete threat to shipping owing to water depths of about 50 meters, and that possible environmental damage is limited to the immediate vicinity.

Nehring disagrees: "We're not talking about peanuts here, but a cocktail of chemicals in our waters." He wants to see a ban on fishing imposed off the Helgoland coast. He argues that even the interior ministry in Kiel, the state capital of Schleswig-Holstein, acknowledged four years ago that the sunken tabun shells are "highly dangerous objects, especially for fisheries, work on the sea floor (anchor maneuvers) and salvage operations."

The authorities are even more concerned about the effects of UXO on land. Some beach resorts do a lot to minimize the risks for vacationers. From before the beginning of Easter vacation to the end of the fall vacation period, employees with the private ordnance-disposal firm KMB Kampfmittelbergung travel to Wangerooge every two weeks to walk with bomb-detection equipment along the eastern beaches between Breakwater B and Breakwater T, a roughly 3.7-kilometer route on which UXO has been discovered for decades.

Last year alone, the KMB team found about 90 high-explosive shells, most of them small, 16 detonators, a torpedo head, a mine and various components of small munitions.

Danger to Vacationers and Beachcombers

Some of the most beautiful spots on the Baltic Sea coast are also burdened by this sinister war legacy. Usedom, Germany's second-largest island after Rügen, could be a truly idyllic seaside location if it weren't for the phosphorus accidents, the delayed consequence of a British air raid. In 1943, the British discovered that the Nazis were building a rocket in Peenemünde, a port village on Usedom. The V2 was being developed there under the direction of engineer and rocket scientist Wernher von Braun.

On the night of Aug. 17, 1943, 596 Royal Air Force bombers dropped tens of thousands of bombs onto the test facility within a few hours. About 40 percent, including incendiary bombs filled with phosphorus, accidentally landed in the sea east of Peenemünde.

Whether it happened in 1943, when the bombs burst upon contact, or in the ensuing decades as a result of corrosion, a large amount of white phosphorus leaked out of the metal casings. It became deposited on the sea floor and, especially during storm surges, makes its way onto land. It can become calamitous for the dozens of amber collectors who walk between Peenemünde and Zinnowitz on weekends, because even experts cannot distinguish the phosphorus lumps from amber at first glance.

Accidents happen every so often. Tourists carelessly put lumps they believe are amber into their pockets. If pieces of phosphorus are heated to temperatures of between 20 and 30 degrees Celsius (68 to 86 degrees Fahrenheit), they can spontaneously ignite, emitting a darting flame with temperatures that can reach 1,300 degrees Celsius. Phosphorus is highly toxic, and merely touching it can cause organ damage.

The administrator of the Usedom North region, Kerstin Teske, tries to reassure visitors, saying that the overall risk from phosphorus is low. She notes that there are one or two incidents a year, and that a total of 12 have been reported since 1990. Teske says that she also likes to go amber-hunting on the beaches.

Marine biologist Nehring, on the other hand, recommends imposing a ban on gathering amber as long it remains unclear how much more phosphorus will wash ashore. The interior ministry in Schwerin, the capital of Mecklenburg-Western Pomerania, feels that a ban is not feasible because it would be difficult to monitor compliance. "How are you supposed to distinguish between an illegal amber-collector and a legal shell or rock collector?" asks one official.

One approach is to provide amber-gatherers with metal containers at lifeguard stations. The containers reduce the risks of phosphorus exposure. But since local residents and tourists alike rarely use the containers, accidents are likely to continue in the future, such as one that occurred on the Baltic Sea coast a year ago. Two female tourists from the eastern states of Saxony and Saxony-Anhalt became the victims of a phosphorus flame, suffering second- and third-degree burns.