When German Chancellor Angela Merkel appeared at a joint press conference with Palestinian President Mahmoud Abbas at the Chancellery in Berlin on Monday, she expected the Middle East to be the main item on the agenda. But instead she found herself answering questions about a data CD that presents the German government with a tricky moral dilemma and could lead to a spat with Switzerland.

But Merkel was adamant that the CD was worth the risk. "Everything should be done to get this data," she said. "If this data is relevant, it must be our objective to acquire it," she said.

The CD in question is believed to contain sensitive data relating to the bank accounts of about 1,500 German citizens who have allegedly stashed their money in Switzerland in a bid to avoid paying tax in Germany. An informant offered the CD to the German tax authorities some time ago for an asking price of €2.5 million ($3.5 million). Although the chancellor has so far been unwilling to commit herself to the deal, she sounded determined at the press conference. She wants the CD, even if the price is high -- and not just financially.

The chancellor has effectively given her blessing to German authorities accepting the indecent proposal. She called Finance Minister Wolfgang Schäuble and informed him that he has her support "in bringing about a solution," according to an official government statement issued on Monday.

Schäuble, for his part, points out that the current case is similar to another case that involved the purchase of stolen data relating to accounts in Liechtenstein which made headlines two years ago. "We will adhere to the same policy," he says. "The government does not make new decisions in such difficult matters once every year and a half." Schäuble insists that there are legal issues to be clarified before a purchase can take place, and that the decision will be reached by the relevant German states, in consultation with the federal government.

In other words, the government is ready to pony up.

In 2007, the Bundesnachrichtendienst (BND), Germany's foreign intelligence agency, paid a thief about €5 million for stolen data that included evidence of tax evasion by German citizens in the tiny Alpine principality of Liechtenstein. It turned out to be a good investment for the German tax authorities. According to the public prosecutor's office in the western city of Bochum, the information resulted in tax evaders paying close to €180 million in back taxes by the end of 2009. The most prominent case was that of Klaus Zumwinkel, the then-chairman of Deutsche Post, who received a two-year suspended sentence for tax evasion.

Even if the government has not yet committed itself to purchasing the new CD, it is clear that Berlin is hoping that the deal will prove to be just as lucrative as the one involving the Liechtenstein data. Random samples from the data apparently indicate that the material could yield valuable information. Although the Finance Ministry is unwilling to comment officially on the case, officials there apparently expect the data on the CD to result in the payment of more than €100 million in back taxes to the German authorities.

On Monday morning, Schäuble spoke directly with his Swiss counterpart, Hans-Rudolf Merz, to advise him of the German government's intentions. Schäuble's spokesman characterized the conversation as "constructive" -- a term that, when used to describe exchanges between politicians, usually denotes significant differences of opinion.

In fact, there appears to be little in the way of constructive behavior coming from the Swiss. Merz apparently informed Schäuble that the Swiss authorities would not cooperate with Germany on cases that were based on stolen customer data. According to a ministry spokesman, the Swiss government even intends to enact legislation to codify its position that a data purchase of this nature is not only illegal, but is also a breach of good faith.

According to officials at the Swiss Finance Ministry in Bern, the two ministers concluded that Germany and Switzerland have different interpretations of the law. Merz, say the officials, told Schäuble that Switzerland is willing to address tax matters with Germany on the basis of a revised double taxation agreement. A new round of negotiations on the treaty, scheduled for March, will address the question of whether Switzerland should in the future surrender data in response to German requests based on suspicions of tax evasion.

On Monday, the Finance Ministry in Bern was unwilling to rule out the possibility that Germany's possible purchase of the CD could adversely affect the talks. "This remains to be seen," said a spokesman for Merz. He also told the German newspaper Die Welt: "What Germany is doing here is illegal in Switzerland."

On the weekend, several Swiss politicians warned the German government that a possible tax deal could upset relations between the two countries. On Monday Mario Fehr, a Social Democratic member of the Swiss parliament, the National Council, told the leading Swiss tabloid newspaper Blick that he could "not believe that Germany really wants to go ahead with this deal." According to Fehr, Schäuble and Merkel are trying to use scare tactics to coerce Switzerland into signing the double taxation agreement and to encourage German tax evaders to turn themselves in. By purchasing the data, Fehr added, the German state would essentially become "a receiver of stolen goods. This is not the level at which civilized states interact with each other."

Politicians with Switzerland's Liberal Party have also used the term "dealing in stolen goods," as did Adrian Amstutz of the right-leaning populist Swiss People's Party (SVP) in remarks to Die Welt. Pirmin Bischof, a member of Switzerland's Christian Democratic People's Party, called the data theft a "modern form of bank robbery." In an interview with Germany's ZDF television network, Thomas Sutter of the Swiss Bankers Association said: "It is our hope that Germany will not purchase this data, and will instead arrest the criminals who have committed a crime in Switzerland, and then return the data to Switzerland."

Naturally the German tax authorities could also launch investigations even without Swiss help. In many cases, however, the key evidence needed to prosecute tax evaders can only be obtained directly from banks. The problem for the Germans is that Swiss banks can only surrender the relevant information if the Swiss authorities have first initiated a cooperation procedure aimed at helping Germany.

If the German government decides to acquire the sensitive data, it will not only be ignoring the concerns of the Swiss, but will also face questions from within its own ranks. On the weekend, Defense Minister Karl-Theodor zu Guttenberg, a member of the CDU's Bavarian sister party, the Christian Social Union (CSU), voiced his objection to the purchase of the data, saying: "Personally, I have a problem with this." Volker Kauder, the CDU/CSU parliamentary floor leader, also rejected the idea. "Theft remains theft," he said. "The government should not be making deals with thieves."

Will the government become a receiver of stolen goods, after all? Foreign Minister Guido Westerwelle, the leader of the Free Democratic Party (FDP), the junior partner in Merkel's coalition government, sounded skeptical on Monday when he said that the government could not turn itself into a "thieves' accomplice." Although tax evasion is a crime, he added, the government must also adhere to strict legal principles when prosecuting it.

The opposition Social Democrats have not been nearly as exacting. Former Finance Minister Peer Steinbrück, for example, had no qualms when it came to purchasing the Liechtenstein data in 2007. SPD General Secretary Andrea Nahles called the purchase of the CD an "imperative of justice" and said she suspected that the qualms being voiced by coalition politicians are "a sort of preventive way of protecting their supporters, in anticipation of generous political contributions ahead of the next election." Green Party leader Claudia Roth says that it is common practice to pay for "relevant information" that can be used to investigate a crime.

According to Schäuble's spokesman, the German government will determine "without delay" whether it is prepared to pay for the Swiss data. Apart from the legal implications, this raises the issue of who exactly will foot the bill for the CD. The prosecution of tax evaders is normally considered a matter for the individual German states, and in this case the federal tax authority has apparently decided that the western state of North Rhine-Westphalia is responsible. In the Liechtenstein case, the federal and state governments split the costs.

In the meantime, the German government is hoping that the affair will already act as a deterrent, even before they get their hands on the data. The mere prospect of the authorities obtaining the CD, they hope, will persuade many tax evaders to voluntarily turn themselves in. 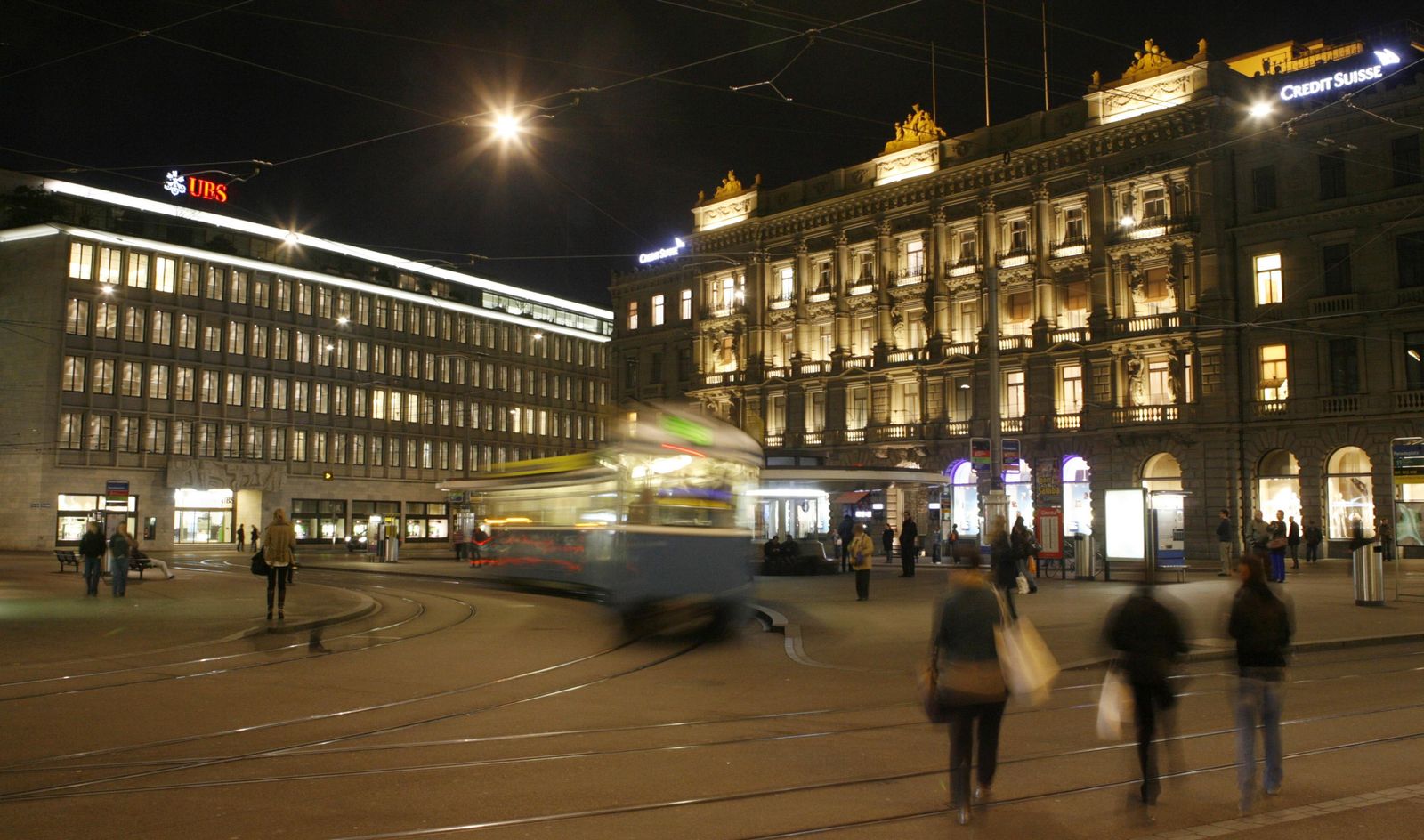 Paradeplatz square in Zurich: Berlin wants to crack down on Germans who use Swiss bank accounts to dodge taxes.