On a summer evening in 2016, David Ranan looked out at Berlin's Siegessäule, or Victory Column, and left his office on the eighth story of the Technical University of Berlin to head to the city's Neukölln neighborhood to speak with four Muslim men about anti-Semitism. His colleague at the Center for Research on Anti-Semitism asked if he should come along, given that one never knew where a conversation like that might lead. But Ranan, who was 71 years old and Jewish, went by himself.

One of the men picked him up at the subway station. Ranan bought baklava, Middle Eastern sweets sold on practically every corner in Neukölln and entered an apartment in a prewar building. The four men, all around 40 years old, had set fruit, cake and a pot of black tea out on the table. After one of them finished his prayers, they began to talk.

"I know that very large economic powers in the world are run by the Jews," said one of the men. Another claimed, "The Jews in Germany came up with all the inventions -- Daimler-Benz, Thyssen, Bosch, no idea. They also founded the entire banking system."

It's mid-February, and Ranan is sitting in a Berlin restaurant and recounting that meeting in Neukölln. At first glance, he looks like a retiree enjoying his twilight years. He wears beige corduroy pants, a pink shirt and a red sweater. But in conversation, the author is combative. "Anti-Semitism and Muslims are already combustible issues individually," he says. "Taken together, they're explosive."

Ranan has interviewed over 70 Muslims and rendered those experiences into a remarkable book that will soon be published in Germany. "Muslim Anti-Semitism. A Threat to Societal Peace in Germany?" An Israeli with German roots talking with Muslims in Germany about anti-Semitism. In practically every conversation, he had to listen to descriptions of stereotypes and conspiracy theories about Jews. And yet the book Ranan has written is anything but an alarmist tome on Muslim anti-Semitism.

"I know that there are protests where people yell, 'Gas the Jews,' that there are hate preachers, but it was also clear to me that you cannot measure 1.6 billion Muslims based on a few extremists. To do that is ridiculous," says Ranan. "I want to create some order in this debate."

Since December, Germany has once again been talking more frequently about anti-Semitism among Muslims. At the time, U.S. President Donald Trump announced that he would move his country's embassy from Tel Aviv to Jerusalem. Thousands of Muslims protested the news on the streets of Germany. At a protest in Berlin, young men set an Israeli flag on fire.

Anti-Semitism researchers, rabbis and representatives of Jewish communities raised their concerns. Chancellor Angela Merkel said, via her spokesman, that "one must be ashamed when anti-Semitism is being so openly displayed on the streets of German cities." Germany's freedom of opinion and assembly, the spokesman said, "was not carte blanche for anti-Semitic lapses, for agitation and for violence." Merkel's center-right Christian Democrats (CDU) and the center-left Social Democrats (SPD), who govern together in a coalition at the national level, would like to create a new government commissioner responsible for combating anti-Semitism.

There was one group, however, whose voice was rarely included in the debate: that of Muslims.

Organ Theft and Other Conspiracy Theories

Ranan conducted lengthy conversations with his interview partners. About half were women, and most had completed high school or studied at college. "I didn't want to interview any hormonal 15-year-old boys who had seen the previous night how Israel is bombing Gaza and were repeating mindless slogans."

But that didn't stop him from hearing some disturbing opinions. Two 21-year-old students, for instance, were obsessed with figuring out where they could shop in good conscience.

"But many brands belong to you! I have heard that Aldi belongs to a Jew --  but it's only something I heard -- I don't know for sure."

"But there are surely people who don't go shopping there anymore! Rossmann, the drugstore DM, that's also supposed to be Jewish:"

"Where do I know that from? It's same way that people say there are German nationalists. We don't know any, but we know they exist."

There are a number of patterns to be found in the transcripts. For example, most had read something about a supposed Jewish global conspiracy or heard about it from friends or family. A female engineer who grew up in a Turkish family in Germany said, "People talk about it, that the world is governed by some families, about 120 families. They are Jewish and that they control the government, more or less. All these diseases, bacteria, that are being spread everywhere in the world here, supposedly also come from there, that means the whole system in the world! I do think that Jews very, very much manipulate the world and also control it."

The people he spoke with seldom referred to the Koran or religious questions. For most of them, the Middle East was much more important.

One of the stories they told Ranan mirrored the plot of the Iranian TV show "Zahra's Blue Eyes," in which a leading Israeli politician has a Palestinian girl kidnapped to have her blue eyes transplanted into his blind son. The Palestinian territories' ambassador to the United States, Riyad Mansour, made a similar claim in 2015. He wrote to the UN secretary-general that Israel was organ-harvesting Palestinians who had been killed and that "bodies were returned with missing corneas and other organs."

One of Ranan's interview subjects was firmly convinced that organ theft was really happening. He said he had received reports from his own family. "Do you really think that my parents, my aunt and uncle, who experienced this, my mother-in-law, all of my relatives, do you really think they are lying to me?" he asked. He even claimed to have personally seen people who had had "their innards cut out."

The central subject in his conversations, Ranan writes, was the Israeli-Palestinian conflict. Many of his interview subjects, he argues, said "Jew" when they meant "Israeli." As Ranan puts it, "When someone is shouting 'Jew, Jew, cowardly pig' at a protest in reaction to an Israeli bombing of Gaza, they aren't referring to London or New York Jews, but Israelis. That doesn't make it more pleasant for spectators and it is especially hard for Jews to bear."

Speaking in Berlin, Ranan repeatedly returns to this thought. "I don't claim there are no anti-Semites, I'm only saying that there needs to be some differentiation."

The cliché that Jews own German discount supermarket chain Aldi or drugstore Rossmann is clearly an anti-Semitic one. But it shouldn't be conflated with criticism of Israel's occupation policy. Many Muslims stand in solidarity with the Palestinians. "That is a real fight between neighbors," Ranan says. "I don't want to trivialize it, but if a million Danes came to Argentina to live, an anti-Danish movement would arise. Danish flags would be burned. One needs to see it that way."

Ranan isn't a hardliner. He actually seeks to develop a better understanding of his interview partners. Maybe it's connected to his unconventional background. Ranan is an Israeli, German and British citizen. He was born David Abraham Thomas Rosenzweig in Tel Aviv in 1946. His parents came from Germany. He claims they weren't passionate Zionists when they fled to the British Mandate for Palestine in 1933.

At home in Tel Aviv, the family spoke German. Thomas, his third name, is an homage to Thomas Mann. "My parents loved German culture," says Ranan. His family returned to West Germany in the 1950s -- the land of the perpetrator, where many still lived. His father worked as the head of finances for the Israeli mission in Cologne and negotiated the reparations for the Israeli state.

At the time, Ranan lived in a boarding school in the Netherlands. When asked why he's interested in Muslim anti-Semitism, he tells a story from that time. Ranan wasn't the only Israeli boy at the boarding school. Together they celebrated Lag BaOmer, a Jewish festival in which dolls representing enemies are burned in a bonfire in effigy. "Hitler," says Ranan, "was, of course, often among them." One year, a student burned a doll resembling Egyptian President Gamal Abdel Nasser. Israel was at war with Egypt at the time. "For these boys, it was totally natural to burn this Nasser doll," he says. "I thought that was unacceptable. I was ashamed."

In 1959, when Ranan was 13 years old, his father died of a heart attack. He returned to Israel with his mother.

Later, he moved to London, where he still lives in the Marylebone neighborhood. He worked at a bank and as a business consultant until he decided to once again try his hand at something new. Ranan studied cultural studies, finished a doctorate degree and began writing nonfiction books. He interviewed Israeli soldiers who served in the occupied Palestinian territories and the grandchildren of the Holocaust generation in Germany.

And now the conversations with German Muslims. It's a delicate subject, but perhaps the distance he had to the subject as an outsider proved helpful Ranan. "It was a wonderful evening, I was fascinated," he says, describing his meeting with the Muslim men in Neukölln. "I wanted to find people who could explain what they were thinking. That's what I got in moments like those."

The number of anti-Semitic crimes is consistently high in Germany. Last year, the police registered 1,453 anti-Semitic offenses, an average of four per day. Of these, 1,377 crimes can be ascribed to the far-right extremist scene. Only 58 crimes were classified as being the result of "religious ideology" or "foreign ideology." According to anti-Semitism researchers, the number of unreported crimes is high. Critics also complain that the judiciary in German does not classify many crimes that are anti-Semitic in nature as such.

Still, Ranan believes the concern in Germany is exaggerated. "I find it strange that people claim there's a big problem with Muslim anti-Semitism," he says. "There's a state of panic, especially in the Jewish community, that cannot be justified." He notes that Muslim women with headscarves are often given dirty looks, but that this rarely gets discussed in the German debate.

Ranan is critical of Jewish organizations and German politicians. He says the Central Council of Jews in Germany hasn't managed to separate itself from an Israeli government that uses anti-Semitism as a "political weapon." He calls the American Jewish Committee (AJC) in Berlin, which fights anti-Semitism and anti-Zionism, a "Jewish lobbying group."

Since the postwar founding of the Federal Republic of Germany, he says, the German government has viewed Jewish life as a litmus test: If the Jews were prepared to live in Germany, they believe, then our country would once again be a democracy. Ranan argues that groups like AJC abuse this. "Of course, it's clear the everyone is going to try to the most that they can out of a situation," he says.

In conversation, Ranan is a provocateur who debates energetically, but he remains objective in his book. He allows many voices to be heard, including some conciliatory ones. A 22-year-old says he would like to have Jewish friends, "because I would like to sit down with them and have an exchange." One Palestinian reflects on the hatred of Jews that he felt as a teenager. "But what good does this hatred do for me -- to what extent am I justified in my hatred?" Still, envy and prejudice pop up frequently. One young man, for example, expresses his anger that synagogues in Germany are provided with greater police protection and security than mosques.

Ranan spent more than a year listening to his interview subjects' arguments, hopes and desires, but also to their prejudices and fears. He says the catchphrases that often came up were about anti-Semitism and the Middle Eastern conflict, but that, if you scratched beneath the surface, there were other concerns: Germany's immigration society, its tensions and the question of how fairly opportunities are distributed in the country. 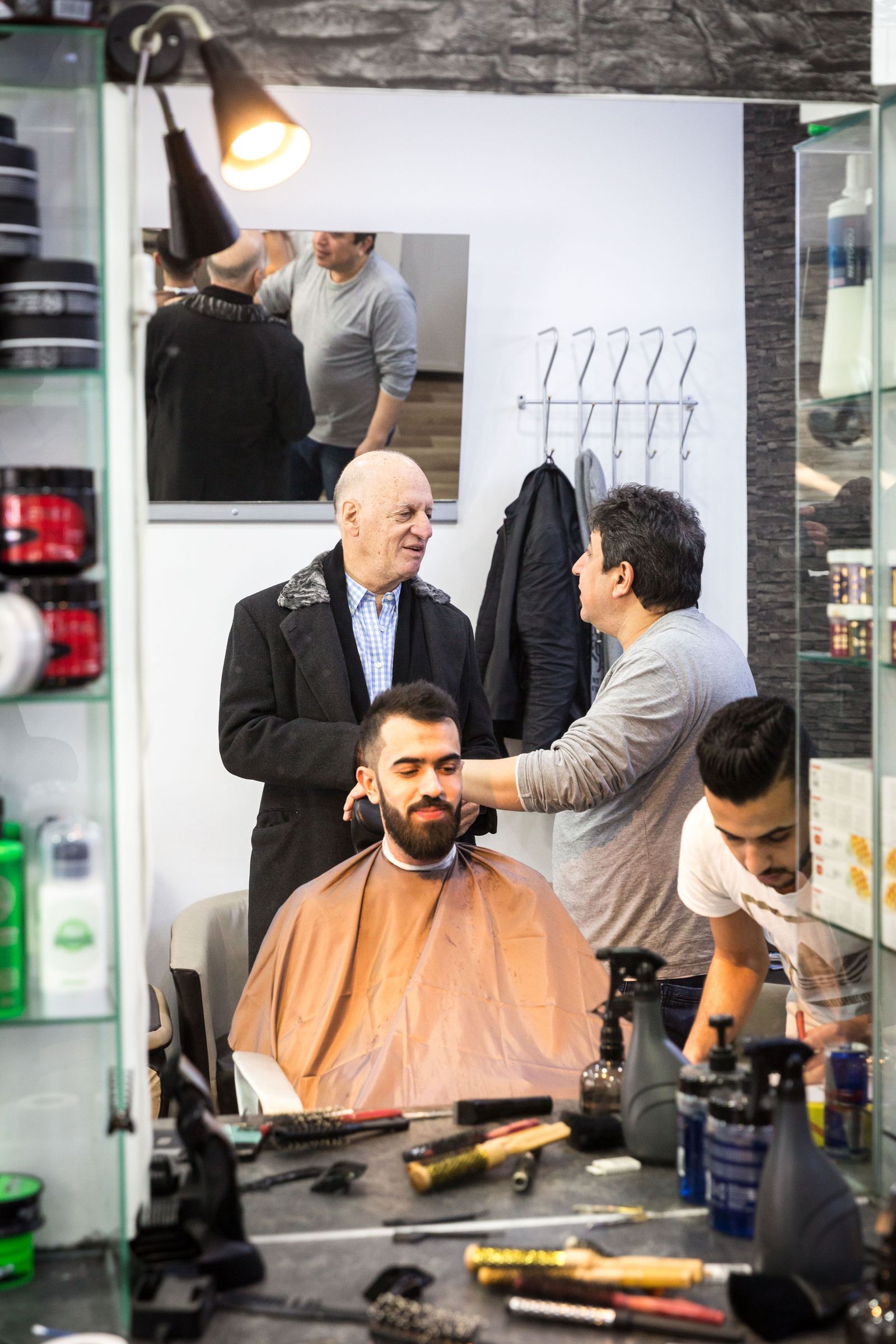