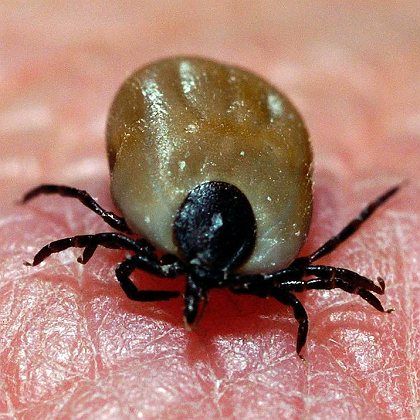 Ticks are on the march in Germany, and global warming will just help them to spread.

No one likes to think of tiny arachnids burrowing into their flesh, but if Germans know what's good for them, they'll start paying more attention to ticks and their nasty habits. The country is bracing itself for a tick epidemic this summer after a mild winter -- and experts say the problem will keep getting worse as global warming continues.

In the latest of a series of warnings by health organizations, Germany's Center for Travel Medicine recommended this week that everyone planning to spend time outdoors in Germany this summer should be immunized against tick-borne encephalitis.

Meanwhile the German Green Cross, which recently held a series of press conferences on ticks and plans two more for May, says ticks are Germany's "most dangerous animal," transmitting a multitude of nasty bacteria and viruses.

The concern is largely prompted by the recent mild winter, which has paved the way for a tick plague this summer. "Because of the mild temperatures, conditions were favorable and most ticks probably survived the winter this year," Christine Klaus of the National Reference Laboratory for Tick-Borne Diseases at Germany's Friedrich-Loeffler Institute (FLI) in Jena told SPIEGEL ONLINE.

The south of the country is particularly affected. The Robert Koch Institute (RKI), Germany's central institution for disease control and prevention, recently classified most of southern Germany as a high-risk area for tick-borne encephalitis (TBE), adding 33 new counties to the existing list of 96 affected counties located mainly in the states of Bavaria and Baden-Württemburg.

The RKI, which works closely together with Klaus and her colleagues, cites changes in their methods for defining tick danger-zones as one reason for adding so many new counties, as well as an increase in people spending their free time taking part in outdoor recreation.

The main contributing factor, though, is a significant increase in cases of tick-related illness. According to RKI statistics, there were 546 reported cases of TBE in 2006, up from 432 in 2005 -- a 26-percent increase in a single year.

Ticks, which are about the size of a freckle, are found in wooded and grassy areas where they wait to latch on to warm-blooded creatures, whose heat and scent they recognize with finely tuned sense organs. The bugs tend to prefer hard-to-find parts of the body such as the back of the knee. There they burrow into their hosts flesh, swelling to three times their initial size as they ingest the blood of their victim. Infected ticks can pass on TBE during the meal.

After a flu-like stage of illness, 10 percent of TBE victims develop severe and often irreversible neurological damage, and 1 - 2 percent of patients die, according to the National Reference Laboratory for Tick-Borne Diseases. The longer a tick goes unnoticed on the patient's skin, the higher the risk of a TBE infection.

Preventative measures, such as bug spray, long pants, and thorough body checks after outdoor recreation are essential to avoiding ticks and the diseases they carry. Experts like the FLI's Christine Klaus stress, however, that immunization is the most effective means of preventing TBE.

While the FLI calls TBE the "most important virus disease transmitted by ticks," the tiny bugs also carry the commonly known Lyme disease. Between 40,000 and 60,000 Germans are infected each year with Lyme disease -- for which there is currently no vaccine -- and the FLI reports that cases of the disease are on the rise. For this reason, experts say tick-awareness and prevention is essential, even with a TBE immunization.

If all this werent enough to keep traditionally active Germans hiding indoors for the rest of the summer, scientists believe that the rise in tick-borne disease is just part of an ongoing trend in the increase of vector-borne infectious diseases due to climate change.

"Ticks are a prime example of how global warming affects a range of mosquito and tick-borne diseases," says Dr. Paul Epstein, Associate Director of the Harvard Medical Schools Center for Health and the Global Environment. He explains that disease-carrying ticks are increasing in numbers and moving north with each warm winter, and that computer models show the animals' range will continue to increase.

FLIs Christine Klaus agrees, citing studies which show tick population growth as far north as Sweden. Even more worrying, ticks arent the only insects showing an increase in their population -- and thereby their potential to cause harm. Epstein cites the spread of pine bark beetles in the American West, which kill large swaths of pine trees in the mountains, and the emergence of mosquito-borne West Nile virus as just two examples.

For Epstein, the march of the ticks is a wake-up call to humanity. Because they react to climate changes faster than other parts of eco-systems, bugs are a clear signal that climate change will have "longer term implications for public health," he says. These implications need not be permanent, though, he says, stressing that he has faith in humanity's ability to reverse climate change.

"Its threats like these that will make us move faster to create solutions," he says.