The video shows two men sitting at a living room table in Hamburg, Germany. The older of the two talks about his cancer, describes the pain he's in and the way his body is deteriorating. "I don't want to live like this for much longer," says Helmut S., 77, in a calm voice. But to commit suicide, to leave behind blood and mess, that's something he says he doesn't want to inflict on his wife.

Helmut S. was an engineer and is now retired. There's not much more he wants from life, only to depart in a dignified way. He concentrates his gaze on the man across from him. That's why he turned to "you, Dr. Kusch," in order to die "in the humane way that you offer."

The film isn't your run-of-the-mill infomercial -- it's a promotional video for death.

Roger Kusch, 54, is the first person in Germany to offer assisted suicide commercially. Before embarking on his latest endeavor, he served as a senior prosecutor and then as the city of Hamburg's leading judicial official as a member of the city senate.

Kusch has been providing his services since June, including various pointers on how to commit suicide, for a fee of up to €8,000 ($10,620). Kusch films his work and makes the videos available on the Internet, in order to document his clients' desire to die and also to draw the attention of others who might be interested in his services.

Though macabre, this advertising method seems to be working. Kusch is pleased to announce that he's received over 1,000 inquiries, and he has helped five people along their way to death.

Now, however, Hamburg's police want to stop Kusch's commercial activities, and they've issued a verbal order forbidding him from assisting any more people who want to commit suicide. The former politician has taken his case to court, and it's now up to Hamburg's administrative court to rule on whether Kusch will be allowed to continue to assist suicides. He has already announced that, if defeated, he will appeal his case to Germany's Federal Constitutional Court, which means the lawsuit could end up bringing about a landmark decision. If Kusch prevails in court, he could even become the vanguard of a new industry.

The legal status of the matter isn't clear-cut, but the prevailing mood certainly is. Kusch has been garnering plenty of opponents -- and not just among Germany's churches, especially since he introduced his suicide machine last year. Politicians from all of Germany's major political parties have gone on countless talk shows to call for "Dr. Death" -- as the German mass-circulation daily Bild has labelled him -- to be stopped. Until last autumn, however, the authorities lacked any legal basis for moving to stop Kusch.

Then Hamburg police received a lead from a journalist, causing them to suspect Kusch of providing more than just advice to those who wish to die. Giving advice wouldn't in itself be against the law. But it is suspected that Kusch may have also obtained the prescription medications that a Hamburg woman named Inge I. used to commit suicide on Sept. 30. If the suspicion were proven in court, it would be a breach of German drug law and any conviction could be punishable by a prison sentence of up to three years. The public prosecutor's office in Hamburg is now investigating, and Kusch has not commented publicly on the accusations.

On November 27, police searched Kusch's apartment and the office of an association he founded. They confiscated hard drives, files, USB sticks, CD-ROMs and cassette tapes. Then one of the officers ordered Kusch not to perform "any kind of suicide assistance." 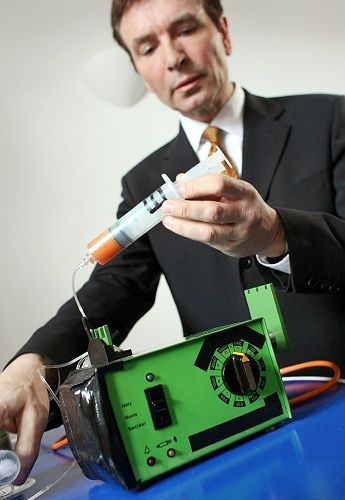 The next day -- a Friday -- officers spoke to seven people in four different German states, whose names and addresses had been found in Kusch's documents. In just one of the cases, in the western state of North Rhine-Westphalia, the police arrived too late. Kusch had taken cover in a hotel room with a client, 97-year-old Frieda F., and she took a dose of lethal medicine there.

In their urgency to track their quarry, the police used methods otherwise reserved for hunting down dangerous criminals. They had the location of his mobile phone traced in order to find out whether Kusch was still visiting clients. They also screened the call data on his mobile phone, including the addresses of text messages he had sent.

The question remains, however, whether the police are even allowed to prohibit someone from assisting a suicide. In this particular case, they invoked their duty to prevent the violation of laws and to save lives in cases of emergency. Now they want to extend their ban on Kusch's activities, which expires on Wednesday, in the administrative court. And they plan to threaten Kusch with a fine if he doesn't abide by the order.

It won't be easy for the authorities to argue their case, though. German police are allowed, for example, to stop a person from jumping off a bridge. But if it turns out that the person is mentally sound, then the police are powerless, even if the person in question attempts suicide again.

The determining factor, says Christoph Gusy, a police law expert at the University of Bielefeld in western Germany, is the degree to which the decision to die is voluntary in instances in which it is made with the help of a person who stands to make money from it. "There's a commercial self-interest there," Gusy points out. That goes as well, he says, for the certificates Kusch has an outside party issue for his clients. These are intended to document that the person wanting to die is mentally sound in all ways. However, the person who performs the evaluation and issues the certificate also earns money from it. According Gusy, there could indeed be grounds for the police's suspicion that Kusch and others who assist suicides may also be helping mentally ill people to end their lives. In that case, he says, the police would need to intervene.

Kusch, meanwhile, plans to continue offering his services and charging for them, although he says he agonized at first about whether he should accept payment. But a Swiss association called Dignitas, currently the most high-profile organization offering assisted suicides in Europe, also charges for its lethal services. And, says Kusch, "I certainly didn't want to be offering a bargain deal."