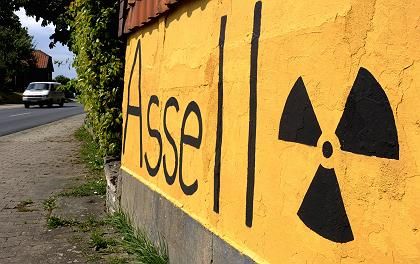 A radioactive leak found at the Asse II waste storage facility has become a major issue in the debate about nuclear energy in Germany.

Wolfram König figures that he's now the person who will have to deal with Asse. König heads Germanys Federal Office for Radiation Protection (BfS), a position he was levered into nine years ago by fellow Green Party member and then Environment Minister Jürgen Trittin. The idea was for König to keep a close eye on the nuclear industry.

The Asse nuclear waste dump has the dubious honor of being the most contaminated legacy of Germanys nuclear power industry. Assuming responsibility for this facility cannot be described as the most popular job in the country. But König, 50, defends the move to transfer oversight of the old Asse salt mine with its 126,000 barrels of radioactive waste -- some of which are leaking -- to the BfS as the right technical decision.

Last Thursday, Germanys highest-ranking radiation-protection official sat in his modern office in Salzgitter and held his tongue while his current boss, Environment Minister Sigmar Gabriel of the center-left Social Democrats (SPD), made himself out to be a crisis manager in Berlin. Two days earlier, Gabriel had raged about mismanagement in the old Asse salt mine and about its operator, the Munich-based German Research Center for Environmental Health, which he accused of being unreliable. But, on this day, the minister proudly presented his solution: The project would be in good hands with the BfS. It was meant to sound as if Gabriel had grabbed the bull by the horns and solved the problem.

König let his boss have his day in the media limelight.

Then, on Friday, after the crowds of journalists had dispersed and all the stories had been written, König issued a statement that made it sound as if the difficulties had just begun: We will have to take a rational approach to the problems. I dont want to raise expectations too high.

The fact of the matter is that the hastily executed transfer from one operator to another has failed to answer the question of what should be done with the radioactive waste in the leaky mine. The legal switcheroo of placing the Asse facility under nuclear regulations -- instead of mining regulations, as was previously the case -- has actually significantly raised the stringent standards that any proposed solution will now have to meet. And Germanys grand coalition now seems even further away from reaching an agreement on what to do with the countrys nuclear waste than it did a few weeks ago.

The debate over Asse has particularly caught the members of the conservative CDU party off guard. Just a few weeks ago, CDU General Secretary Ronald Pofalla praised nuclear power as eco energy -- a statement that is now hard to reconcile with reports of leaky storage drums and radioactive contamination. In order to proceed with our plan of extending the operational periods of nuclear plants, it is imperative that we make progress on the issue of a deep geological repository, Podalla said.

For years, the conservatives have favored using another salt mine for final waste storage, the facility at Gorleben, which is geologically similar to the one at Asse. They have done this because pro-conservative energy companies have already invested a great deal of money there and because they fear that alternative sites could spark a wave of protest movements in their own backyards. This could happen, for example, in the region surrounding the city of Ulm, which belongs to the constituency of Germany's federal minister of education and research, Annette Schavan (CDU).

Since 1979, €1.5 billion ($2.15 billion) of research has been conducted at Gorleben so as to determine whether the salt dome can be used to securely store the hot radioactive waste for hundreds of thousands of years. But these scientific activities were put on hold in 2000 when the then SPD/Green coalition declared a 10-year moratorium at Gorleben to give them time to renew the search for another site. However, so little happened afterwards that some observers began to suspect that then Environment Minister Trittin and the Greens were dragging their feet in order to prevent nuclear power from gaining any additional degree of legitimacy. Their motivation is clear: If a final repository were approved for use, the environmentalists would lose their key argument against nuclear power.

A Game of Feints

The coalition agreement between the CDU/CSU and the SPD brought some movement to the governments policy on the final storage of nuclear waste. In 2006, Environment Minister Gabriel presented a plan that gave preference to Gorleben and, at the same time, proposed that the search would continue for alternative sites. His proposal stated that another site would only be granted priority if it proved substantially better than Gorleben. However, Chancellor Angela Merkel gave in to pressure from the states of Bavaria and Baden-Württemberg and decided to shelve this initiative and entirely remove the issue of long-term storage from the political agenda. 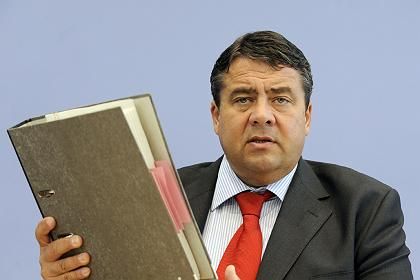 Now the chancellor has to pay a high price for that decision. Although they have waited out the Asse problem themselves, Trittin and Gabriel can now perfectly turn the situation to their own advantage. Just when the chancellor seemed about to score points in the climate debate with the argument that the atom could protect the environment and produce cheap electricity, the Asse scandal sheds light on the dark side of nuclear power. This could derail the plans of the CDU/CSU to start drilling again at Gorleben as soon as possible in order to show the population that progress was being made on the issue of storage and to postpone the planned phaseout of nuclear power.

The fact that König, a member of the Green Party, has taken responsibility for the contaminated mine does not sit well with the CDU. But the head of the BfS stresses that he will take a technical -- and not a political -- approach to the situation. The Munich-based research center has proposed flooding the tunnels with magnesium chloride, but Königs staff has rejected that idea. They say that it would allow radioactivity to reach the biosphere in just 150 years.

Königs experts have been working for weeks on an alternative. They want to remove the old barrels of waste, or at least some of them. Nevertheless, such a retrieval operation would take time -- a factor that is lacking in the assessments made to date. Official reports state that the security of the mine is only assured until 2014.

In light of this extremely tight time frame, it comes as no surprise that a new leaked report from an engineering firm in Bochum has raised many peoples hopes. According to this paper, taking appropriate security measures with large amounts of concrete could keep the mine from reaching a critical stage for another 10 to 15 years. The essential thing right now is to gain time to find the best possible solution for sealing the mine, says König. If there is an opportunity to do this, then we have to take advantage of it.

The old nuclear waste disposal facility of Morsleben in the former East Germany gives some indication of just how much money such an experiment could cost. For years, Königs BfS has been dealing with this legacy -- and stabilizing it with concrete. Current estimates place the cost of securing this mine at €2.2 billion.

Morsleben also reveals other weaknesses in the Gabriel solution. For years, the BfS has been trying to get official approval for closing up the mine. But it has failed to meet the strict standards of Germanys nuclear regulations, which require that underground waste remain safe for hundreds of thousands of years.

Given the degree of chaos at the site, the chances of Asse's meeting these standards are slim. Critics like Udo Dettmann, spokesman for a citizens initiative against the nuclear waste site, are extremely skeptical of the idea of commissioning the BfS to handle the site. Dettmann says that if an acute threat arises, the government agency has the right to suspend Germanys stringent nuclear regulations. In Morsleben, such an emergency has already taken place. The BfS acts as both operator and regulatory agency at the same time, says Dettmann, and basically monitors itself.

This explains why all former federal and state environment ministers before Gabriel -- including Merkel and Trittin -- have felt that mining regulations should apply in Asse. So, did Gabriel create a temporary situation without end when he put his foot down?

Last Friday, even the chancellor contributed to the debate over an alternative waste site by saying that she has no desire to spend additional billions. In an unpublished strategy paper, the deputy chairwoman of the CDU/CSU's parliamentary group, Katherina Reiche, warned that the search for alternatives to Gorleben would cost at least €1 billion. The document also says that if Gorleben were abandoned, the energy providers could file compensation claims against the federal government worth billions of euros. Reiche calls for Gabriel to lift the moratorium on investments at the Gorleben facility "forthwith."

Tanja Gönner, the CDU environment minister of Baden-Württemberg, is even more vehemently opposed to mixed approaches. She is motivated by the fact that her state offers the only viable alternative to the Gorleben salt deposit: Opalinus clay, which is found in the region surrounding Ulm. State Governor Günther Oettinger is so upset by the latest twist in the debate that he has openly called for a cabinet decision to increase the pressure on Berlin.

Nevertheless, leading members of the CDU/CSU parliamentary group are already asking themselves whether it wouldnt be better to remove the inherited defect in Germanys final waste storage policy. Gorleben was picked under former Chancellor Helmut Schmidt according to national political and economic criteria rather than after an extensive comparison of different sites and rock strata, as is more common today. The selection was quickly narrowed down to 200 salt domes in Lower Saxony. There was never a search for alternatives, such as those in granite or clay. After the elections in Bavaria, says a top-ranking member of the conservative parliamentary group, "we should look into a search for alternatives."

Such a move by the CDU/CSU literally plays into the hands of Environment Minister Gabriel because it could help make Gorleben legally watertight. The project can only stand up in court if it can be proven that the salt dome in Lower Saxony was selected on scientific rather than political grounds. On a number of occasions, Gabriel has even indicated that he might be willing to make concessions on the phaseout times in order to make headway on the issue.

Baden-Württemberg will have to be on its guard. The state is dependent on nuclear power for half of its electricity and is lagging behind in the development of renewable energy sources. In addition, it is already part of the region that has been selected to house final nuclear storage facilities.

Only a few kilometers beyond the border, the Swiss are building a deep geological repository. For decades the Swiss National Cooperative for the Disposal of Radioactive Waste (NAGRA) has been conducting research on the ideal type of rock for final storage facilities. In the late 1990s, drillings at a depth of 500 to 600 meters (1,640-1,968 feet) revealed particularly dense deposits of Opalinus clay. Because it swells, the gray-brown 180-million year old stone can even prevent water from seeping in, the factor which led to the Asse debacle.

In addition to Ulm, similar deposits have been found in a large number of regions in Germany. NAGRA engineers say that such clay deposits present interesting options in the search for final storage sites. It is, says NAGRA head Markus Fritschi, in our opinion, a material with great advantages.