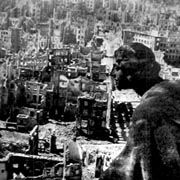 The city of Dresden was destroyed following a vicious Allied bombing raid at the end of World War II.

Calculations of the death-toll from the Anglo-American bombing of Dresden in February 1945 have varied widely, but never ceased to be dramatic. Figures suggested have ranged from 35,000 through 100,000, and even up to half a million at the wilder fringes of speculation.

It is easy to see why. Dresden was a magnificent city of three quarters of a million people, its population further swollen by hordes of anonymous refugees from the Eastern Front. Its historic heart was destroyed in one apocalyptic night by aircraft armed with more than 4,500 tons of high explosive and incendiary bombs. This devastated area amounted to around 13 square miles (34 square kilometers).

The firestorm that destroyed Dresdens architectural treasures and so much of its civilian population became a byword for the horrors of modern warfare and a stain on the Allies claim to have fought a good war against Nazism. This was a truly catastrophic event to which only very big numbers seemed able to do justice.

Now, more than 60 years later, it seems we must lower our estimates. After four years work, an impressive commission of German historians this week filed its report on this issue, and it seems that even the lowest figure so far accepted may be an overestimate. Drawing on archival sources, many never previously consulted, on burial records and scientific findings -- including street-by-street archaeological investigations -- plus hundreds of eye-witness reports, the Dresden Commission of Historians for the Ascertainment of the Number of Victims of the Air Raids on the City of Dresden on 13/14 February 1945 has provisionally estimated the likely death-toll at around 18,000 and definitely no more than 25,000.

These conclusions, to be elaborated on in a full report due out next year, are convincing. However, despite the eminence of the commissions experts, including Germanys most distinguished historian of the air war, Dr. Horst Boog, they will be controversial, especially in Dresden itself. Many of those who lost families, homes and loved ones in the catastrophe have found dignity and meaning in the sheer magnitude and dark grandeur of the event, and to see the Dresden casualty figures reduced from the hundreds of thousands to more normal (though still horrendous) levels seems incredible, even insulting.

And there are the political distortions. The Nazis were the first to exaggerate the number of victims for propaganda purposes, and the communists were liable to push the numbers up during the post-war period, in order to discredit the Anglo-Americans, who had been the Soviets allies until 1945 but were now their Cold War enemies. Finally, neo-Nazis in modern Germany conjure up dizzyingly high figures running into the hundreds of thousands, while at the same time playing down or denying the World War II mass murder of the Jews and the Roma and Sinti, hoping thereby to convince their fellow-citizens that the Allied bombing of Germany was an even worse holocaust than the actual one.

Hence the commissions establishment in 2004 was opposed by many in Dresden and its work has since been subject to political chicanery. That it has finally issued its report seems something of a miracle. And that its members have courageously and doggedly followed the logic of the evidence, knowing the unpopularity it may bring, speaks strongly for the integrity of the historians involved.

So can we say "case closed"? Almost certainly not. Many Dresdeners, understandably, cling to their memories and traditions even in the face of historical evidence. The far right will undoubtedly persist with a line of propaganda central to its aim of undermining the democratic German state and rehabilitating the Nazi past. For all these people, interpretation of the Dresden death-toll will likely remain an article of faith rather than a matter of fact.