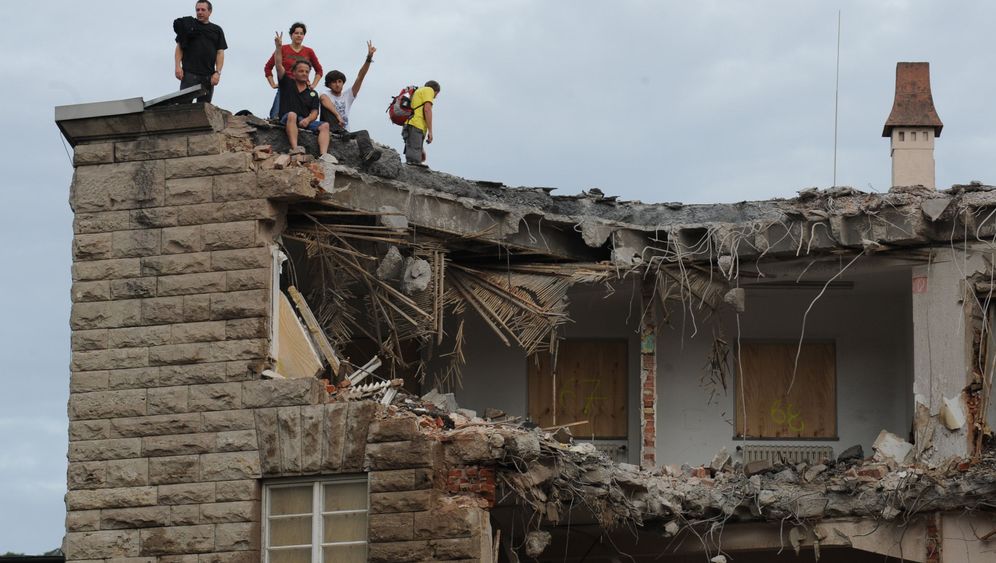 Thousands of protesters turned out in Stuttgart on Wednesday night to protest the controversial Stuttgart 21 project, on the same day that work began on the demolition of the north wing of the city's central train station, a listed historical building.

A large contingent of police secured the construction site of the controversial project, but at times chaos prevailed. Protesters held a sit-in to block the construction site and were later carried away by police. Later in the evening, seven activists scaled the wing currently being demolished and unfurled a protest banner, calling for the mayor to resign. The protesters claimed they would remain there until German Transportation Minister Peter Ramsauer orders a stop to the project.

Around 500 protestors demonstrated against the project through the night. On Thursday morning, Stuttgart police said they planned to reinforce the presence of officers in the city. Meanwhile, opponents of the major construction project announced massive protests and an ongoing effort to block the construction site they say will last at least until Friday. Protesters are seeking to hinder trucks trying to enter the train station and on Friday they plan to form a human chain around the parliament building in Stuttgart, which is the capital of the southern state of Baden-Württemberg.

On Wednesday night, demonstraters also delayed the departure of a high-speed TGV train bound for Paris for around an hour. Police then closed some of the tracks in the station leading to further delays in rail travel.

Police officials complained that protesters in the city are growing increasingly aggressive and they claim the demonstrations are losing their previously peaceful nature -- going beyond the acceptable level of civil disobedience. They claim that Stuttgart 21 protesters disrupted fire department and paramedics as they attempted to respond to an emergency.

Police also claim that up to 200 activists blocked streets in the city center until late in the evening, threw bottles and then threw eggs at people visiting a Stuttgart wine festival. They said protesters had also erected a barricade using trash cans on a federal highway into the city. Stuttgart police chief Sigfried Stumpf said the actions had gone far beyond reasonable protests and civil disobedience. "People who block rescue workers are acting criminally," he said.

Protest organizers denied the allegations. Matthias von Herrmann, the spokesperson for one group opposing the project, claimed that politicians were seeking to "criminalize us through the police" and that the demonstrations had been peaceful. He estimated that around 12,000 people had attended Wednesday's protest, but police are claiming attendance of about half that figure.

Meanwhile, one of the original architects who helped design the new station has said the project should be abandoned. In the Thursday issue of the German magazine Stern, architect Frei Otto demanded that the Stuttgart 21 project be stopped. A year ago Otto, who designed the station together with Düsseldorf-based architect Christoph Ingenhoven, abandoned the project because he had safety concerns.

He told Stern that the earth in the areas where construction is to be carried out is full of natural springs, gypsum layers with high anhydrid content (in other worlds, minerals that can swell up and make the ground unstable) and hollows that can lead to uncontrollable craters.

The magazine also obtained a copy of a 2003 report commissioned by Deutsche Bahn from Berlin-based engineering firm Smoltczyk & Partner that describes the earth in Stuttgart where the project is to be built as being as "filled with holes as Swiss cheese, full of dolines and hollows" that "will make construction incredibly difficult."

Otto claimed the contents of the report had not been shared with members of Stuttgart's city council or with the public. He also described problems the local geology had wreaked on other infrastructure projects in the region."With today's knowledge," Otto said, "I cannot take any responsibility for this project."

In response, Ingenhoven described Otto's statements as "close to scaremongering."

Experts estimate that stopping the project, as protesters are demanding, would come at a maximum cost of €400 million to €500 million ($507 million to $634 million). That figure comes from Christian Böttger, a professor at Berlin's University of Applied Sciences and an expert in German railways, whose figures contradict those of Stuttgart 21 officials. They say that abandoning the project would come at a cost of at least €1.4 billion.

The €4.1 billion project would see the transformation of Stuttgart's central station, which is a so-called terminus station, converted into a through station. Tracks that currently splice and divide a large part of the city in two, would be submerged underground and entire new city districts would be built in what is currently a wasteland of steel tracks. In addition, a separate high-speed rail line costing billions is to be built, connecting Stuttgart, its international airport and the city of Ulm.

Since construction on the project began in February, protests against it have grown shriller and shriller. For weeks, thousands have taken part in the demonstrations. In a bizarre twist, 10 Germans marched on New York's Times Square on Wednesday evening blowing whistles and expressing their opposition to Stuttgart 21.