Two anti-tank mines from World War II exploded spontaneously along a road in the eastern German state of Brandenburg in the past week, confirming warnings that unexploded bombs are becoming increasingly unstable.

Last Wednesday, Dec. 14, a detonation tore a crater 10 meters (33 feet) wide next to a road between the towns of Gross Ossnig and Neuhausen, some 100 kilometers (62 miles) southeast of Berlin, Brandenburg police said. No one was hurt. One eyewitness, Gerhard Willing, said a schoolbus had just driven past the spot. "It was damned lucky that no one was hurt," he told the Berliner Zeitung newspaper. The area had been a storage site for a nearby bridge construction project. "Metal struts weighing tons were dumped there, big trucks drove past and workers were constantly walking around," said Willing.

A stretch of the road subsided and the police cordoned off the area. Bomb disposal experts found two more mines nearby. They were too unstable to remove and had to be blown up where they lay on Friday. Some 400 residents living within one kilometer of the area were evacuated and told to leave their doors and windows open to prevent the glass shattering from the shockwaves.

Then, on Saturday, another mine exploded of its own accord. "Self-detonations are very rare," Torsten Schwieg, a local council official, said. "But having two go off at such a short interval is highly unusual."

The area was the scene of fighting in World War II because it was close to an airfield where newly-built Focke-Wulf combat aircraft tested their machine guns. The airfield was bombed several times.

Elderly locals recalled that weapons and munitions were thrown in a bomb crater near the airfield, one local newspaper reported. That might explain why the mines were found buried three or four meters deep -- they were evidently discarded. If they had been planted to take out a tank, they would have been placed much closer to the surface.

Unexploded shells and munitions are a common problem in Germany. Earlier this month, the country had to conduct one of its largest ever peacetime evacuations in Koblenz when some 45,000 people, half the population of the western city, had to leave their homes while experts screwed the detonators out of a British 1.8 ton bomb found in the Rhine River.

"Germany will have to deal with the munitions problem for a very long time to come," Hans-Jürgen Weise, the former bomb disposal chief for the west of Brandenburg, now retired, told SPIEGEL ONLINE. "Unexploded bombs are becoming more dangerous by the day through material fatigue as a result of ageing and through the erosion of safety elements in the trigger mechanisms."

In a previous interview with SPIEGEL ONLINE, in 2008, Weise recalled his team getting two or three calls a day with bombs being unearthed at construction sites or elsewhere. He said the state was particularly contaminated by American delayed-action bombs which were becoming so unstable that it would soon become impossible to defuse them safely.

The search for further mines in Neuhausen is continuing this week. 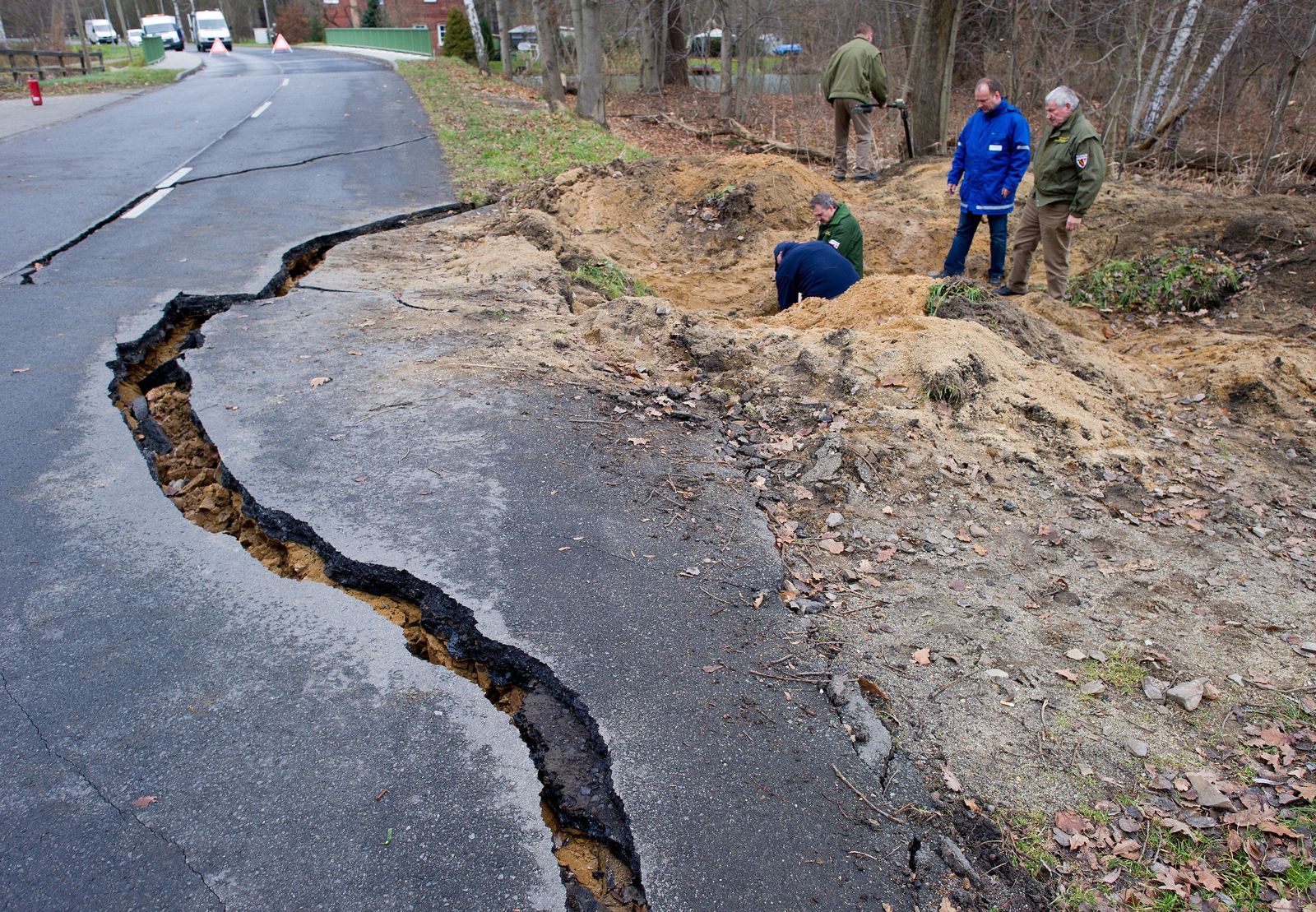 Experts examine the crater caused by the first explosion on December 14 near the town of Neuhausen in the eastern German state of Brandenburg.