The figure of negative 16.3 percent came as a shock to the Volkswagen management. It marks the decline in sales of VW cars in the United States in November. Meanwhile, total car sales in the American market rose by almost nine percent. Foreign competitors Ford, GM and Toyota, and domestic rivals Mercedes-Benz and BMW are all selling more cars.

"We're facing a headwind," VW CEO Martin Winterkorn said recently. That's an understatement. The sales drop in the US could even endanger his big goal of making VW the world's biggest carmaker by 2018.

Sales growth in North America and China is a major part of that plan. Until now, VW's market share in the US was just 2.6 percent, on a par with Subaru and well behind Korean maker Kia.

Winterkorn doesn't feel comfortable with that ranking. That's why VW invested more than one billion euros ($1.38 billion) in the construction of a plant in Chattanooga and in the development of a model specifically geared to the US market. And the plan appeared to be working -- between 2009 and 2012, VW doubled its sales in the US. But the latest sales figures are a rude awakening, and have left VW managers wondering what's gone wrong.

And that's the root of the problem: Volkswagen views the US market through a German prism. "The biggest problem we Germans have is that we think we know what the Americans want from us," said Winterkorn.

With an aim to to improve the company's chances in the US market, VW asked US dealers to describe a model that would suit American tastes. The company then constructed a new version of the Passat sedan, making it roomier, smoother to drive and cheaper. VW developers had to swallow their pride to construct a model with such driving characteristics. But, as the sales figures show, it was only half a step forward.

Jim Ellis, a VW dealer in Atlanta, says his customers want a new model every two years. It should look new. This might mean optical retouching, a new front grille or a few new trims. But Volkwagen updates its models only every four years or longer.

The American Passat was launched in 2011, and already looks old. But VW head of sales Christian Klinger didn't sound the alarm, and continued to plan for record sales. VW hired 500 temporary workers in September, but it didn't take long before the company was unable to keep them occupied.

Sales are probably also being hit by VW's poor reputation for quality in the US. According to statistics gathered by market researchers for J.D. Power, the company ranges between 28th and 32nd place. The research was gathered by asking customers who had owned an automobile for three years whether they had experienced problems with it in the past 12 months.

Many managers in Wolfsburg find this result puzzling. The plant in Chattanooga is required to produce vehicles of the same quality as the factories in Wolfsburg or Emden. Already on their way to work, the 3,200 employees in Chattanooga are confronted with quality control stats. Monitors show that "Team Red," the late shift, received a mark of 1.0 for its paint jobs. That's a good result -- above 1.8, customers are able to recognize defects like small streaks.

Also when it comes to gap dimensions -- the seams between the door and the frame or the hood and the fender - the same guidelines hold as in German factories. They should come to 3.5 millimeters, with a permissible deviation of 0.5 millimeters. "That is simply our DNA," says a VW quality expert.

But American customers have their own DNA, and a different understanding of quality. That much became evident to VW executives when a supplier recently paid a visit to the Volkswagen plant in his Toyota.

The white of the Toyota's bumper was different than the white of its bodywork. Such a car would never be allowed out of the VW factory. When Volkswagen employees brought this to the attention of the supplier, he just said, "Oh, that -- I hadn't even noticed it."

More important than paint or the width of a gap is that the car has the latest navigation system and that the cruise control is situated where the driver is accustomed to having it from their previous car. These are two points where the Passat shows weaknesses, and where it suffers in the J.D. Power survey.

A further problem for the US Passat is that its competitors have responded to its initial success. Ford, Toyota and the other carmakers have upgraded their models with better equipment and cut prices. The car class into which the Passat falls is a fiercely contested one in the US, so analysts do not expect sales to pick up again.

In hindsight, it shows that the decision to produce a mid-sized model in the new factory was mistaken. Mercedes-Benz and BMW have put their American factories to use churning out SUVs -- North America is the largest market for such vehicles, and it is still growing. VW's German rivals have had no trouble running their production lines at full capacity.

By contrast, the VW factory in Chattanooga is becoming a problem for VW. Some 200,000 cars could be produced there annually; so far this year, less than 140,000 have been manufactured. To use up the space capacity, a second model must be assembled there. The VW board has already decided to develop a large SUV for the American market. It will be at least two years, however, until production commences. Winterkorn's target of nearly doubling sales in the US from 438,000 in 2012 to 800,000 by 2018 can no longer be met, one senior VW manager believes.

The new difficulties in the US are almost nothing compared to the issues that the VW group was facing there some time ago. The North American business was at times costing the group €1 billion a year. Now it is profitable.

But the bad news from the US is infuriating Winterkorn. In hardly any other project has he taken such an intensive and personal interest. He was continually flying across the Atlantic to oversee the construction of the plant. "The US strategy," as he recognized even before production began in Chattanooga, "is our Achilles heel." 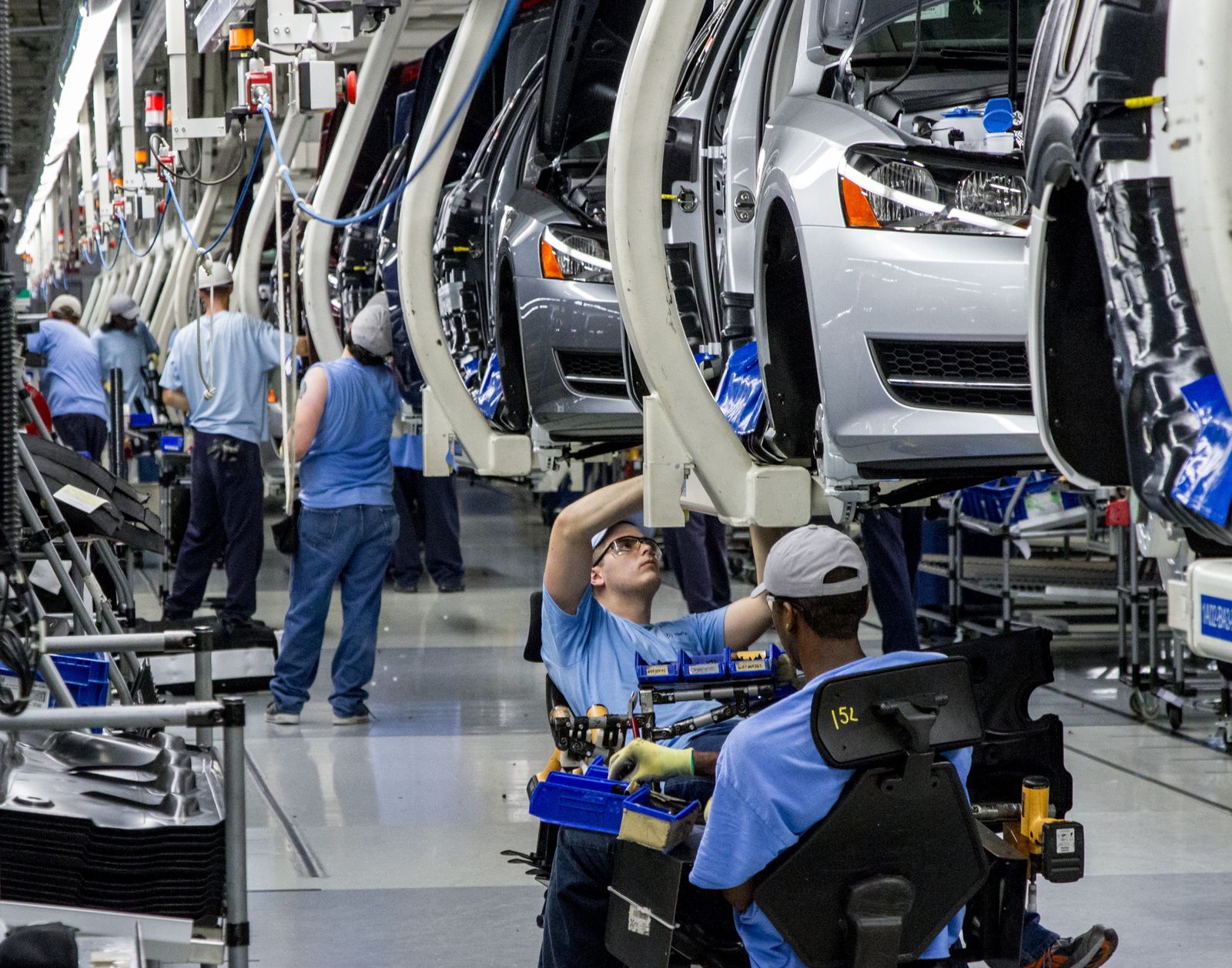 Workers assemble Volkswagen Passat sedans at the German automaker's US plant in Chattanooga.