Walter H. spent about 37 years, well over half of his life, behind bars. He was sent to prison for a sexually motivated homicide as a young man. He later served time for attempted rape while fully intoxicated and for aggravated battery. He had been incarcerated in a prison in southwestern Germany since 2007, after a court ordered his preventive detention on the grounds that he presented a danger to the general public.

But on Wednesday of last week, shortly after 4 p.m., the doors of the prison were suddenly opened for the man, who had been classified as a likely repeat offender. He was given €50 ($62) in spending money. Then, two police officers and a parole officer took him to a hotel, paid for four nights in advance -- and left him to his own devices.

The first thing H. did was to call the people who had been fighting for his release for years. Weeping with joy, he told his defense attorney, Michael Rehberger: "I'm out. I'm in a hotel."

But his attorney has mixed feelings. Of course, he says, he was very happy for his client, and yet he believes that the whole thing is "lunacy." According to the attorney, H. was released "with almost no preparation" and has not even been placed under so-called supervision of conduct, whereby H. would be subject to the control and assistance of his probation officer. Cases like this, says the attorney, involve "people who are basically unable to live in the real world."

H. owes his freedom to the European Court of Human Rights in Strasbourg, which ruled last Tuesday that some of Germany's rules on preventive detention are in violation of human rights. Less than 24 hours later, the Federal Court of Justice in the southwestern German city of Karlsruhe announced: "The defendant in this case shall be released immediately."

Many other offenders classified as dangerous could soon follow H. into freedom, including notorious burglars and people convicted of fraud, as well as serial rapists and multiple murderers. Thomas Ullenbruch, a criminal judge and expert on preventive detention in the southwestern German town of Emmendingen, has calculated that around 160 offenders in preventive detention could now immediately invoke the Strasbourg ruling, directly or indirectly -- a much higher figure than the previously reported number of 70 offenders. A further 40 criminals could do so in the next few years.

The Strasbourg court has taken a clear position in the conflict between the need to protect citizens from criminals and the offenders' fundamental legal rights. But its ruling has created a huge problem for politicians and the courts, which now have very little time to come up with a legally binding solution that takes both the interests of citizens and the rights of offenders into account.

The federal and state justice ministers are determined to avoid situations like the one that unfolded last year in the village of Heinsberg-Randerath, near the western city of Aachen, where citizens threatened to take the law into their own hands and held vigils in protest against a sex offender who had been released despite having been classified as a danger to society.

The only question is how such situations can be avoided. A heated debate has already erupted in Germany between conservatives and liberals over the consequences of the Strasbourg ruling.

Bavarian Justice Minister Beate Merk, a member of the conservative Christian Social Union (CSU), called the decision "a fiasco." Her counterpart in Lower Saxony, Christian Democrat Bernd Busemann, even announced his intention to prevent the release of offenders. "I cannot take the responsibility for this," he said.

They are supported by the head of the police union GdP, Konrad Freiberg, who warned that the Strasbourg ruling could have "dramatic" consequences for security. He announced that the police would not be able to cope with new problems relating to these offenders. Anyone who called the police now to ask that such offenders be monitored, said Freiberg, would be told: "That isn't possible."

The fact that things have even reached this point is an embarrassment for both politicians and the justice system. The federal government has tightened the rules for preventive detention six times since 1998, usually after horrific crimes were committed.

A Violation of Human Rights

In a particularly far-reaching step, lawmakers in 1998 did away with the 10-year maximum limit on preventive detention that was in force at the time. That rule stipulated that criminals in preventive detention had to be released after a decade -- even if they were still considered to be dangerous.

In 2004, even the German Constitutional Court gave its blessing to the amendment. The judges were not troubled by the fact that the removal of the limit didn't just apply to the newly convicted, but also applied retroactively to old cases. As a result, locking people up for good became constitutionally valid.

In December, the European Court of Human Rights ruled that Germany's retroactive change to the rules was a violation of human rights. The decision became legally binding last week, when the Strasbourg judges threw out the objection filed against it by the German government.

New Law in the Works

Many observers are asking what the next step is. German Justice Minister Sabine Leutheusser-Schnarrenberger, a member of the liberal Free Democratic Party (FDP), vehemently rejects criticism from the Christian Democrats that her ministry has remained silent on the issue. She says that since coming into office, she has been working on a new version of preventive detention. "The work that others are now anxiously demanding is in fact almost complete," says Leutheusser-Schnarrenberger. She notes that her ministry has developed the key points of new legislation, which she now intends to fine tune within the government coalition. She has announced that a draft bill will be ready by June.

The bill would make it easier for judges to include a subsequent period of preventive detention for hardened criminals in their sentences or, in cases that are unclear, to at least include a relevant proviso which would keep the option open for a decision to be made at the end of the period of incarceration. The minister also wants to "adjust the instrument to make it more targeted" by restricting it to "the worst offences."

Legal experts, for their part, are calling for an even more comprehensive overhaul of the legislation. A "true reform of the entire system of preventive detention" is needed, says Jörg Kinzig, a criminal law professor in the southwestern city of Tübingen. Kinzig considers the minister's current plans to be questionable. The proposed proviso stipulating that preventive detention is an option, is vulnerable under the Strasbourg judges' ruling, says the expert. "I'm not sure whether this will turn out well," he says.

The reform is also likely to be difficult because the Strasbourg ruling criticizes, in particular, the concrete living circumstances of those in preventive detention, and argues that their situation resembles a new sentence more than a restriction order with the prospect of release.

In fact, in physical terms, preventive detention is hardly distinguishable from actual incarceration. The criminals live in the prison, where they enjoy modest privileges. At the Berlin-Tegel prison, for example, these privileges include open cell doors during the day, additional visiting hours, more outdoor time and the right to receive six instead of three packages per year, EU observers noted.

Apparently there are also "deficits" in the way staff treat the prisoners. According to the report, there is a "lack of commitment," and "psychological care and support seemed extremely inadequate."

For the roughly 200 existing cases directly or indirectly affected by the Strasbourg decision, the reforms from Berlin will already be too late in any case.

Other retroactive amendments to the law that affect prisoners currently in preventive detention will not hold water in Strasbourg, says legal expert Thomas Ullenbruch. "It's clear that nothing is going to work retroactively anymore." In other words, it will be very difficult to prevent detainees' release in most cases, even if there are many reasons not to let them out.

Judges issued a so-called "subsequently imposed preventive detention order" against Walter H. The legal basis for that kind of order, which is imposed in cases where the offender's danger to society only becomes clear during his or her prison term, was only established in 2004, however. Hence, in the case of H., the law came into effect many years after his conviction, and was therefore applied retroactively -- which, in light of the European Court of Human Rights' ruling, is now legally problematic. For this reason, the Federal Court of Justice, which, with a view to Strasbourg, had already deferred H.'s case once, had no choice but to release him immediately.

'Stay Put and Behave Yourself'

In H.'s case, sudden freedom has already turned out badly once before. In 1988, H. was placed in a psychiatric unit when, after walking a woman home from a party, he suddenly attacked her in a forest, ripped the clothes from her body and left her there naked. When he managed to escape during a "chaperoned city outing" in 1990, he promptly went to a brothel, where he went for a prostitute's throat after having erection problems.

At least H. was insightful enough to meet with his attorney and -- voluntarily -- his probation officer last Friday, to discuss how to structure his life outside prison and, most of all, how to avoid another relapse.

His attorney Michael Rehberger had already said to him on the phone: "Just stay put and behave yourself."

"You can depend on me," H. promised him. 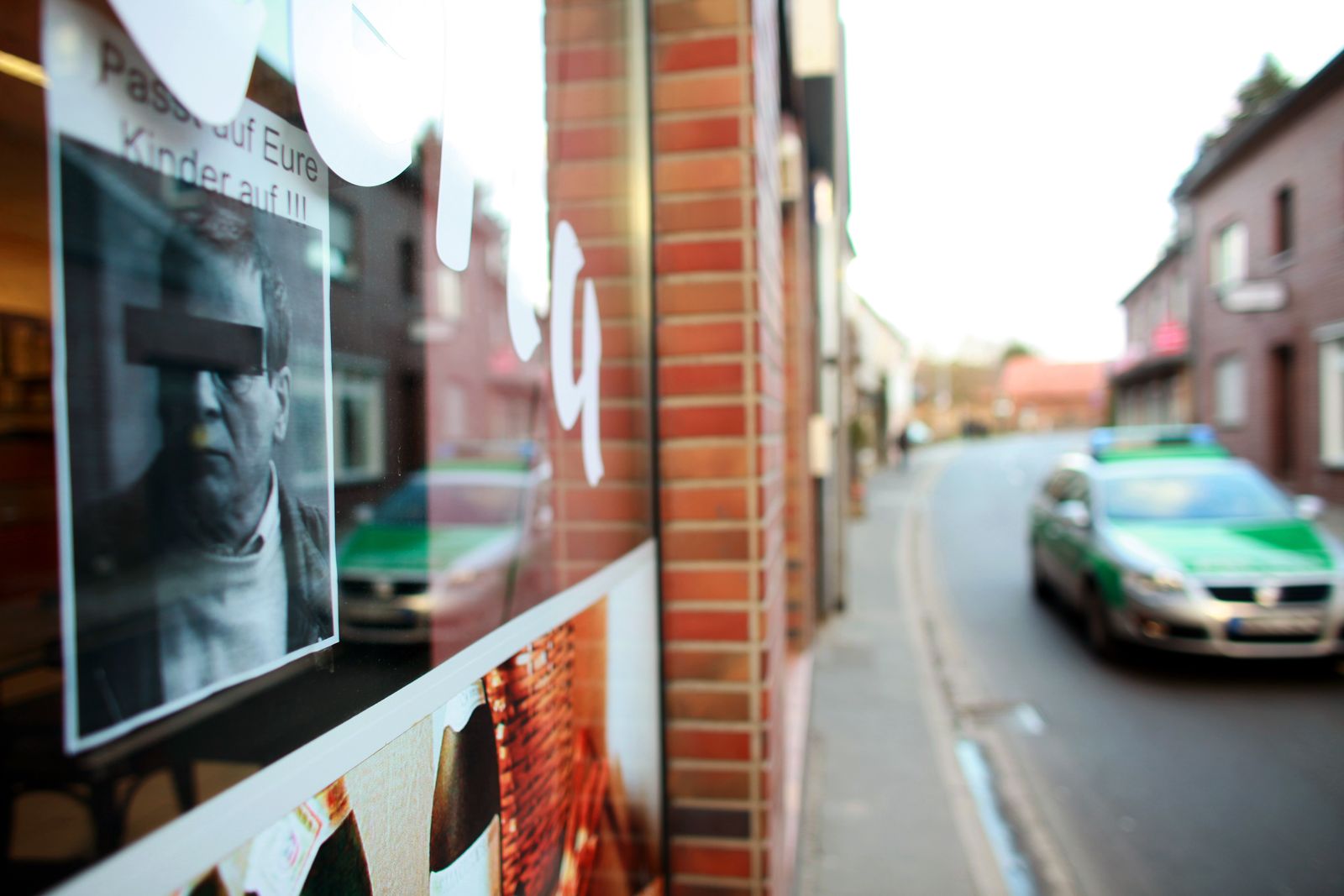 In the village of Heinsberg-Randerath, citizens threatened to take the law into their own hands in protest against a sex offender who had been released despite having been classified as a danger to society (March 2009 photo). A new ruling by the European Court of Human Rights will mean that Germany is forced to release violent criminals currently being held in preventive detention.