In his first appearance before the global public, Ivan "John" Demjanjuk chose to be provocative. After arriving in Tel Aviv on a flight from New York, he tried to kneel down and kiss the ground of the Holy Land, but his guards pulled him back.

In a Jerusalem courtroom Demjanjuk, accused of being a Holocaust henchman of the SS, cheerfully greeted the participants in Hebrew, and during the trial he irritated everyone by blowing kisses and doing stretching exercises. 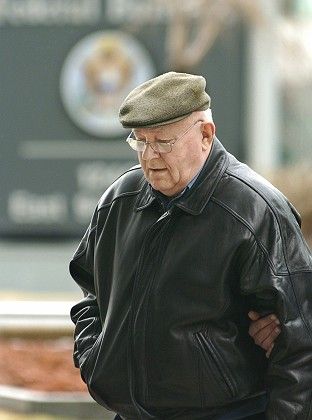 John Demjanjuk may soon be travelling to Germany.

That was then. Now, 15 years after being acquitted in Israel, Demjanjuk could be flown to a foreign country once again to be put on trial, this time in Germany. Last week the Central Office of the State Justice Administration for the Investigation of National Socialist Crimes in the southwestern German city of Ludwigsburg concluded its preliminary investigation and submitted a 140-page final report to the public prosecutor's office in Munich.

Demjanjuk, according to the report, can be charged with taking part in the murders of at least 29,000 people. The Munich public prosecutor's office is to request the extradition of Demjanjuk, an 88-year-old retiree who now lives in a suburb of Cleveland, Ohio.

It could be the final act in a 30 year long international legal drama that has been fraught with mishaps. Ivan Demjanjuk is, behind concentration camp doctor Aribert Heim, number two on the list of Nazi war criminals still alive today. He was born on April 3, 1920 in the Ukrainian village of Dubovi Makarensy. A burly man, he spent most of his life working as a tractor driver, truck driver and autoworker, first on a Ukrainian collective farm, and then, after World War II, for various international refugee organizations in southern Germany and, finally, from the 1950s until his retirement, in a Ford auto plant in Ohio.

There was only one period, between 1942 and 1945, when Demjanjuk's work had little to do with vehicles. According to the evidence gathered by the Ludwigshafen agency, he was a member of a group known as the Trawniki, a band of about 5,000 "foreign volunteers," including Balts, Ukrainians and Volga Germans. They did the Nazis' dirty work in the occupied areas of Eastern Europe, sometimes voluntarily, but often under duress. Stationed at the SS's Trawniki training camp near Lublin in eastern Poland, they were deployed for short-term assignments.

These henchmen of death participated in mass shootings and helped wipe out Jewish ghettos. In the extermination camps, they drove the prisoners from the trains to the areas where they were forced to undress and, finally, to the gas chambers.

In 1942 Demjanjuk, a member of the Red Army, became a German prisoner of war. "I would have given my soul for a loaf of bread," he later said in court. Millions of Soviet prisoners of war died in German camps. Demjanjuk survived and was sent to the Trawniki training camp, and later served in the Nazi concentration camps at Majdanek, Sobibor and, finally, Flossenbürg in Bavaria. In early 1945 he joined the Vlasov Army, a group of Russian volunteers allied with Nazi Germany against the Soviets.

Demjanjuk also proved himself a determined survivor in the chaos of postwar Germany. He found a job as a driver in a displaced persons camp in the Bavarian city of Landshut, and was subsequently transferred to camps in other southern German cities until he ended up in the town of Feldafing near Munich in May of 1951. His SS past was never an issue.

Demjanjuk met his later wife Vera during his odyssey through southern Germany, and the couple had a daughter, Lydia. The young family applied for permission to immigrate to America. In January 1952 the Demjanjuks sailed from Bremerhaven to New York on board the General Haan, a former troop transporter.

After working on farms in Indiana, Demjanjuk later moved his family to Ohio, where he began working for Ford. The couple had two other children, Irene and John Jr., and the Demjanjuks moved to a small house in the Cleveland suburb of Seven Hills, where they still live today.

In the late 1970s, American authorities received information suggesting that Demjanjuk was involved in Nazi crimes. In 1986, he was extradited from the United States to Israel, where he was sentenced to death in 1988. Five Holocaust survivors identified him from a photograph, claiming that he was "Ivan the Terrible," a guard at the Treblinka extermination camp known for his brutality.

'Convinced that Charges Can Be Filed'

But it turned out that Demjanjuk and "Ivan the Terrible" were two different people. The real Ivan was probably a man named Ivan Marchenko, who was killed with a shovel during a prisoner revolt at Treblinka in 1943.

In 1993, Israel's supreme court was forced to lift the death sentence because of "reasonable doubt" about his guilt. The survivors and their families were outraged, but Demjanjuk, a free man, was flown back home in business class, at taxpayer expense.

The German investigators now feel better equipped. After conducting research in German, Israeli and American archives, they have accumulated documents, witness testimony and deportation lists. The Ludwigsburg chief investigator, Chief Prosecutor Kurt Schrimm, says he has "new evidence" and insists: "We are convinced that charges can be filed."

Several months ago, Demjanjuk lost his remaining legal protection against extradition. In May 2008, the US Supreme Court declined to hear the presumed Nazi war criminal's appeal against a 2005 deportation order.

According to Demjanjuk's Nazi identity card, on March 27, 1943 he became a guard at the Sobibor concentration camp in what is now eastern Poland. The Ludwigsburg investigators believe that the identity card, once considered a fake, is real and see it as their central piece of evidence. In addition, one of Demjanjuk's former cronies has testified that the two men drove the deported prisoners from the railway cars.

There is also evidence of Demjanjuk's service in other camps. According to records from Majdanek, he was given a disciplinary beating in January 1943 for having left the camp in defiance of a typhus quarantine -- documents show that he had gone off with three other guards to visit a nearby brothel. Demjanjuk apparently worked at the Flossenbürg concentration camp in Bavaria between the fall of 1943 and early 1945, according to records showing that he was issued weapons there.

But the investigations center on Sobibor. Sobibor was purely an extermination camp, and anyone who worked there as a guard participated in murder.

The Ludwigsburg investigators compiled the names of 29,000 people, including 1,900 Germans, who were deported from the Westerbork transit camp to Sobibor, where they were murdered during Demjanjuk's time there as a guard.

German prosecutors hope that a 1951 registration document they discovered in the town hall at Feldafing near Munich will help bring the case before a German court, because it proves that Demjanjuk's last place of residence in Germany was in the Munich area and, therefore, that a Munich court can file for his extradition. The Munich prosecutor's office also happens to be one of three in Germany that specialize in Nazi war crimes cases.

Last week the Munich experts insisted that the case should not be rushed. "We will not allow ourselves to be pressured," says Christian Schmidt-Sommerfeld, the chief prosecutor in charge of the case. According to Schmidt-Sommerfeld, his office must first determine, by carefully reviewing the Feldafing registration documents, whether it even has jurisdiction. "We have to feel completely confident," says Schmidt-Sommerfeld, noting that an indictment can hardly be expected this year.

It is quite possible that the Munich prosecutor's office will conclude that the case does not fall within its jurisdiction. In that case, it would be up to the German Federal Supreme Court to decide where the case should be tried -- yet another time-consuming detour in this complicated affair.

The case should have been decided in court long ago. But Demjanjuk has benefited from bureaucratic snags in several countries. The American Office for Special Investigations (OSI), the US authority charged with investigating Nazi war crimes, initially held back important documents because they did not fit into Israel's indictment structure.

And in Germany, no public prosecutor feels responsible, to this day, for foreign Nazi criminals who committed murder in occupied countries on behalf of the Germans. When the German Foreign Office in Berlin received a letter from the OSI this summer indicating that Demjanjuk could be extradited soon, the government officials discovered that there is no active case against Demjanjuk in Germany.

Desire to Look Good in the Press

Now the German prosecutors are coming under growing international pressure. "We are pleased about the new developments in the Demjanjuk saga," says Jeffrey Sinensky of the American Jewish Committee.

Serge Klarsfeld, a Paris Nazi hunter whose organization has collected extensive evidence against Demjanjuk, also welcomes the initiative, but hopes that a potential trial does not end in another acquittal. "That would be the worst thing, because an acquittal would make it seem as if the crimes for which he was being tried never happened."

Even if Munich does declare that the Demjanjuk case falls within its jurisdiction, political actors will soon have their say. A request to take Demjanjuk into custody would first have to be submitted to the Bavarian justice ministry, which would then forward it to Federal Ministry of Justice (BMJ). The BMJ decides in such cases whether to forward the request to the United States. In cases of special political relevance, the Foreign Office and the Federal Ministry of the Interior would also be consulted.

Whether this legal drama will ever come to a close remains questionable. The biggest problem will likely be the suspect's ability to stand trial. In a letter to a news agency, John Demjanjuk Jr. wrote that his father won't be capable of defending himself in further foreign trials. Demjanjuk and his family have consistently denied the crimes. The case hasn't been about justice for a long time, says Demjanjuk's son, who believes that the German investigators are merely motivated by a desire to look good in the press.