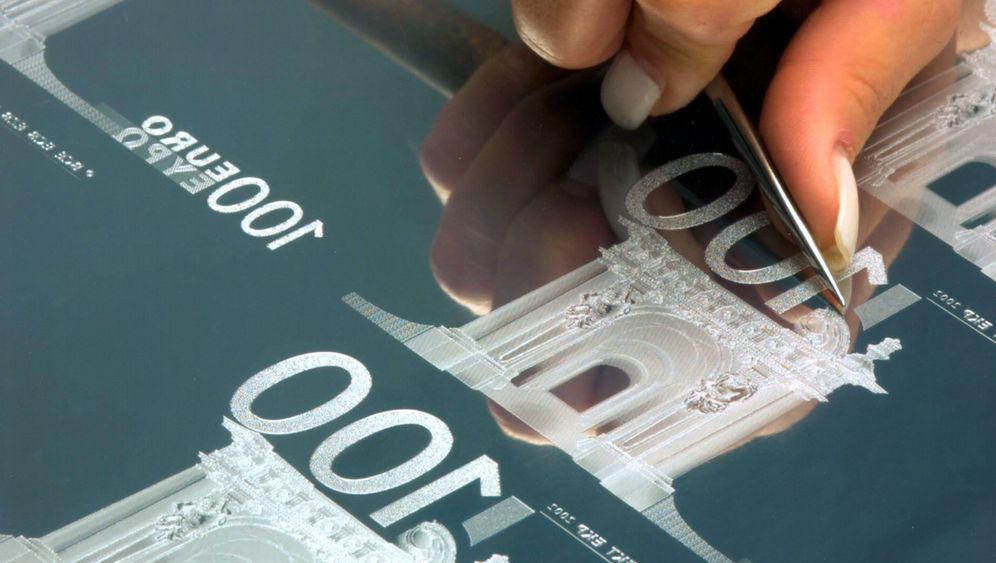 Photo Gallery: Return of the Mark?

As a playwright, Rolf Hochhuth knows how to use timing to achieve the greatest possible impact. In the 1960s, he criticized the pope for remaining silent about the Holocaust. When everyone in the world was talking about globalization, he took to the theater stage and unmasked consulting companies like McKinsey as exploitation machines.

Now Hochhuth is campaigning against the euro -- and his stage is Germany's Constitutional Court. "Why should we help rescue the Greeks from their sham bankruptcy?" he asks. "Ever since Odysseus, the world has known that the Greeks are the biggest rascals of all time. How is it even possible -- unless it was premeditated -- for this highly popular tourist destination to go bankrupt?"

In the spring, he joined a group led by Berlin-based professor Markus Kerber that has filed a constitutional complaint against the billions in aid to Greece and the establishment of the European stabilization fund, which was set up in May 2010. Hochhuth wants the deutsche mark back. "I don't know if this is possible. I only know that Germany lived very well with the mark."

It's an opinion that suddenly places this nearly 80-year-old man in a rather unusual position, at least for him: on the side of the majority of Germans.

Better Off with the Mark

Unnerved by shaky, debt-ridden countries and bailout packages worth billions, the majority of Germans want the mark back. In a survey conducted in early December by the polling firm Infratest dimap, 57 percent of respondents agreed with the statement that Germany would have been better off keeping the mark than introducing the euro. Germans, it seems, are gripped once again by their historic fear of inflation: According to the Forschungsgruppe Wahlen polling institute, 82 percent of the population is worried about the stability of their currency.

Now, a network of euro critics is capitalizing on this atmosphere. A group consisting of an aging playwright, a recalcitrant professor, a frustrated member of parliament with the business-friendly Free Democratic Party (FDP), the grandson of a former chancellor and a former top manager have decided they don't want the euro anymore -- at least not the way it is now. They are still only united by little more than a common issue, but it wouldn't be the first loose association of individuals that ended up becoming a political party.

"The return of the mark? I can imagine that we could see the rise of a German Tea Party focusing on precisely this issue," says Thomas Mayer, chief economist at Deutsche Bank, referring to the conservative American political movement.

German Chancellor Angela Merkel of the conservative Christian Democratic Union (CDU) faces a dilemma as to how to deal with ordinary Germans' concerns about the euro. If she takes their fears seriously, she will have to assume a hard-line stance toward countries that are drowning in debt like Greece and Portugal. But if she plays the iron chancellor, she will have no choice but to break with the Europe-friendly traditions of former CDU chancellors like Konrad Adenauer and Helmut Kohl.

Scope for a Protest Movement

For the time being, no political party has focused on the currency concerns. In reaction to the crisis, German Finance Minister Wolfgang Schäuble, who is also a member of the CDU, has urged closer cooperation in European politics -- which is precisely the opposite of what many people want. The center-left Social Democratic Party (SPD), which stylizes itself as the party of the common man, is a strong proponent of euro bonds -- joint European government bonds that critics say would place the burden primarily on German taxpayers.

By contrast, the conservative Christian Social Union, the CDU's Bavarian sister party, can't make up its mind as to which of two party members it should take inspiration from: Theo Waigel, who paved the way for the euro when he was Germany's finance minister, or Peter Gauweiler, who has challenged its constitutionality in court.

Pollsters like Matthias Jung from Forschungsgruppe Wahlen say that they can imagine the formation of a protest movement coalescing around euro-related fears. "The government has to prove that the bailouts for Greece and Ireland serve our own needs in Germany," says Jung. "If the billions in aid are not convincingly justified, it will lead to a legitimation crisis."

Frank Schäffler, a Bundestag member with the FDP, has been endeavoring for some time now to start a Tea Party-style movement within his party. So far, the group, which he founded last September, has been little more than a meeting place for a handful of politicians who, frustrated by the ongoing demise of the FDP, have created a website with a few smart slogans.

The euro issue, however, is generating attention for the FDP sectarians. "FDP supporters are highly sensitive to currency issues," says Schäffler. "(FDP party leader Guido) Westerwelle and the leaders of the party's parliamentary group are doing too little to address their concerns. So we have to launch a grassroots movement."

On a Thursday evening in early December, boisterous beer-drinking visitors were loudly enjoying themselves at Christmas parties throughout Munich's famous Paulaner Bräuhaus beer hall. Meanwhile, in a separate conference room, Schäffler was giving a dry presentation to the Hayek Society on the sins that led to the euro crisis.

The name of the society is very fitting. Friedrich August von Hayek, who received the Nobel Prize in Economics in 1974, was of the opinion that currencies should be a product like any other. Just as companies sell radios, private banks could circulate their own money -- the idea being that the most stable currency would rule out in the end.

The euro, as the presenter and audience quickly agreed, is bad money. It should be abolished. Since the introduction of the European common currency, Schäffler has counted over 70 violations of the Stability Pact, which limits the annual budget deficits of euro-zone countries to 3 percent of GDP. He has also vehemently criticized the European Central Bank, which has been purchasing government bonds from cash-strapped countries, even though EU rules forbid it from buying debt directly from governments. "We buy everything except animal feed," said the FDP politician to general applause.

A Violation of the German Constitution

In a penthouse apartment in Berlin, Markus Kerber, a professor of finance, is leafing through a statement. In the dateline, there is an 'X' in front of the word December, and the paper is addressed to the German Constitutional Court, Second Senate, Schlossbezirk 3, 76131 Karlsruhe.

Kerber has given up all hope of making headway with the established parties. In contrast to Schäffler, he's not interested in mingling among the people. Strong legal arguments are his weapon against the euro.

Based on this new brief to the court, Kerber and 46 co-plaintiffs aim to prevent Portugal from receiving money from the European stabilization fund. The Portuguese still have not submitted an application for funding, but economists presume that it is only a matter of time before the heavily indebted country needs billions of euros in aid. When that happens, Kerber can exchange the "X" in his brief for a date and submit the complaint to the court.

In Kerber's opinion, such aid is just as much a violation of the German constitution as the billions for Greece and the stability fund itself, against which he has lodged a constitutional complaint. He argues that, with each of these bailouts, the euro zone comes one step closer to becoming a transfer union, where the prosperous north constantly bails out southern European countries. Kerber accuses German Finance Minister Wolfgang Schäuble in particular of "economic treason."

'An Expression of a Critical Society'

It is Kerber's hope that the judges at the Constitutional Court will see things the same way. Over the past few decades, the judges have observed Europe moving towards greater unity with skepticism, but have not actively hindered the process.

Kerber is hoping that his group of plaintiffs will prove more persuasive than the individual campaigns of the past years. "Our constitutional complaint is an expression of a critical society," he says. In addition to Hochhuth the playwright, he is supported by authors, members of the FDP-affiliated Friedrich Naumann Foundation and Patrick Adenauer, the grandson of postwar Germany's first chancellor, Konrad Adenauer.

Adenauer feels that people are avoiding the issue. "The days of the euro as a single currency for countries from Ireland to Greece are numbered, if no debt refinancing with creditor liability is pushed through now," says Adenauer, who is the head of a German association of family-owned companies. "I'm amazed that political parties and large industry associations are not openly saying this." Adenauer is sure that his grandfather would also see things this way. "He would look into the question of whether the common currency is really necessary for everyone in this situation, or whether the pressure to adapt will end up being too big and the EU will suddenly find itself politically damaged."

The Ten Commandments of Currency

Another opponent of the European currency in its current form is Hans-Olaf Henkel, who was for many years the head of Germany's leading employers' association, the Federation of German Industries (BDI). "The statement that German industry benefits enormously from the euro is like the Ten Commandments in Germany," he says. "But Germany was also the world's second biggest exporter in the days of the deutsche mark. The proportion of euro-zone countries purchasing our exports has even dwindled since the currency's introduction."

Henkel is in a hurry. Just in time for the euro crisis, the one-time enthusiastic supporter of the common currency has now written an anti-euro book titled "Rettet unser Geld!" ("Save Our Money!"). Controversial German author Thilo Sarrazin wrote the dust-jacket text. Just as the former Bundesbank board member Sarrazin has capitalized on the immigration debate in Germany, Henkel wants to take advantage of the underlying mood among the population. In fact, after giving a reading in a Hamburg bookstore, listeners asked him why he didn't run for office in the city government. Following a one-hour flight, he makes an appearance in Frankfurt, before participating in a talk show on German television.

Henkel has a mission: He wants to divide the euro. All of the "olive countries" -- as Henkel dubs the Greeks, the Italians and the French -- should pay in southern euros in the future, he says. The north -- in other words, primarily Germany -- would pay with the northern euro.

Economists oppose the idea: German exports would become more expensive and German banks would lose billions in southern Europe. But Henkel's break with the prevailing doctrine has paid off -- his book is on the best-seller list. "Naturally a movement calling for a return to the mark would have a chance at the polls," says the former top manager confidently.

Manfred Brunner believed the same thing back in 1994. Brunner, a former EU commissioner, was the first and only individual to venture a bold experiment by launching an anti-euro party, known as the Association of Free Citizens (BFB).

But his party failed miserably. Today, now that the euro is threatening to fail, Brunner feels vindicated. "A currency union cannot work without an economic government," he says. During the 1994 European elections, the BFB received just 1 percent of the vote in Germany. Afterwards, it was infiltrated by right-wing politicians and drifted into obscurity.

"Today," says Brunner, "my chances would be better."