He had it all planned out: In February, Josef Ackermann would announce the annual results of Deutsche Bank for the last time -- a record profit before tax of €10 billion ($13.6 billion). Three months later, to loud cheers at the annual stockholders' meeting, the CEO would then move upstairs to become chairman of the supervisory board. He would declare with pride that the bank had been safely steered through the financial crisis, with its stable retail banking business strengthened through the acquisition of Postbank.

But all those well-laid plans have turned to dust. The profit target was abandoned long ago, and on Monday evening, it was revealed that Ackermann would not move up into the supervisory board. That role will instead be filled by Paul Achleitner, chief financial officer of insurance giant Allianz.

The announcement marks the end of a power struggle between Ackermann and Clemens Börsig, the current chairman of the supervisory board who is stepping down in May -- and marks a low point, at least for the time being, in the Swiss banker's career.

Ackermann and Börsig had actually agreed on a compromise in the summer: Börsig got his way by securing the appointment of his preferred candidates to succeed Ackermann as joint CEOs next year -- Anshu Jain, the Indian-born head of Deutsche Bank's investment banking section, and Jürgen Fitschen, the head of the bank's Germany business. In return, Ackermann would take over as chairman of the supervisory board from Börsig -- and thus have the chance to keep a close eye on the new chief executives.

But this deal has now gone up in smoke. Officially, Ackermann says that the "extremely challenging conditions" facing the financial markets requires "my full attention as CEO of the bank" and "does not allow enough scope for the many talks with individual shareholders necessary to implement the original plan."

He was referring to the fact that he would have had to woo majority shareholders individually in order to achieve the 25 percent of their votes necessary to enable the legally complicated move from CEO to the supervisory board.

But there could be more behind his decision to give up on the job than just legal concerns or challenging time management. There have been increasing reports recently about resentment in the upper echelons of Deutsche's management where many had been planning for a future without Ackermann. Confidants of the bank chief have seemed accordingly nervous in recent weeks.

Ackermann's public image has also been damaged recently. The latest incident came only a few hours before his decision to forego the supervisory board position was announced. The public prosecutor's office in Munich is investigating Ackermann, who is accused of having lied as a witness in a case against his predecessor Rolf Breuer. Ackermann's Frankfurt office was even searched last week. Deutsche Bank has dismissed the allegations as baseless.

Breuer has been accused by lawyers for the late Leo Kirch of contributing to the collapse of the Kirch Group after calling into question the media mogul's credit-worthiness in an interview in February 2002. Ackermann had previously been involved in the case purely as a witness, but now finds himself a target for prosecutors.

No Deutsche Bank CEO wants to leave his post under the cloud of an investigation. But the probe alone wouldn't have thwarted Ackermann's ambitions. It appears that so many factors came together in recent weeks that the pressure on Ackermann became too great.

In addition to the power struggle with Börsig and the investigation, it was above all a fall in profits which weakened Ackermann's position. He had announced the record figure of €10 billion before tax to shareholders, and then doggedly adhered to this goal even as the deterioration in the financial crisis caused it to be unrealistic long ago. It was not till early October that Ackermann admitted €10 billion was not longer attainable. Investors were shocked, the stock collapsed; the company even has to axe some jobs.

And things could get worse. There is a threat of trouble in the US where Deutsche Bank is having to contend with numerous compensation lawsuits. The largest is from the US government itself, which has accused the bank and its real estate subsidiary MortgageIT of wrongfully collecting federal grants to the tune of $1 billion (€740 million). Deutsche Bank has rejected the allegations as unfounded, but a guilty verdict would nonetheless have the potential to blacken the departure of the boss even further.

And Deutsche Bank agreed late on Monday to pay US regulators $145 million (€106 million) to settle accusations over the collapse of five credit unions during the credit crisis. The bank had been accused of misleading the credit unions over the risks posed by mortgage-backed securities which later collapsed. The deal -- which also saw Citigroup pay out $20.5 million (€15.2 million) -- will ensure that the matter will not have to go to court, and neither bank has admitted any blame.

Even in Berlin, where Ackermann had previously enjoyed a good reputation, backing for Germany's top banker has recently disappeared. Since the financial crisis has intensified again, politicians from all parties have gone on the attack to try and distance themselves from the banking sector -- at whose head stands Ackermann, if only for the next six months. 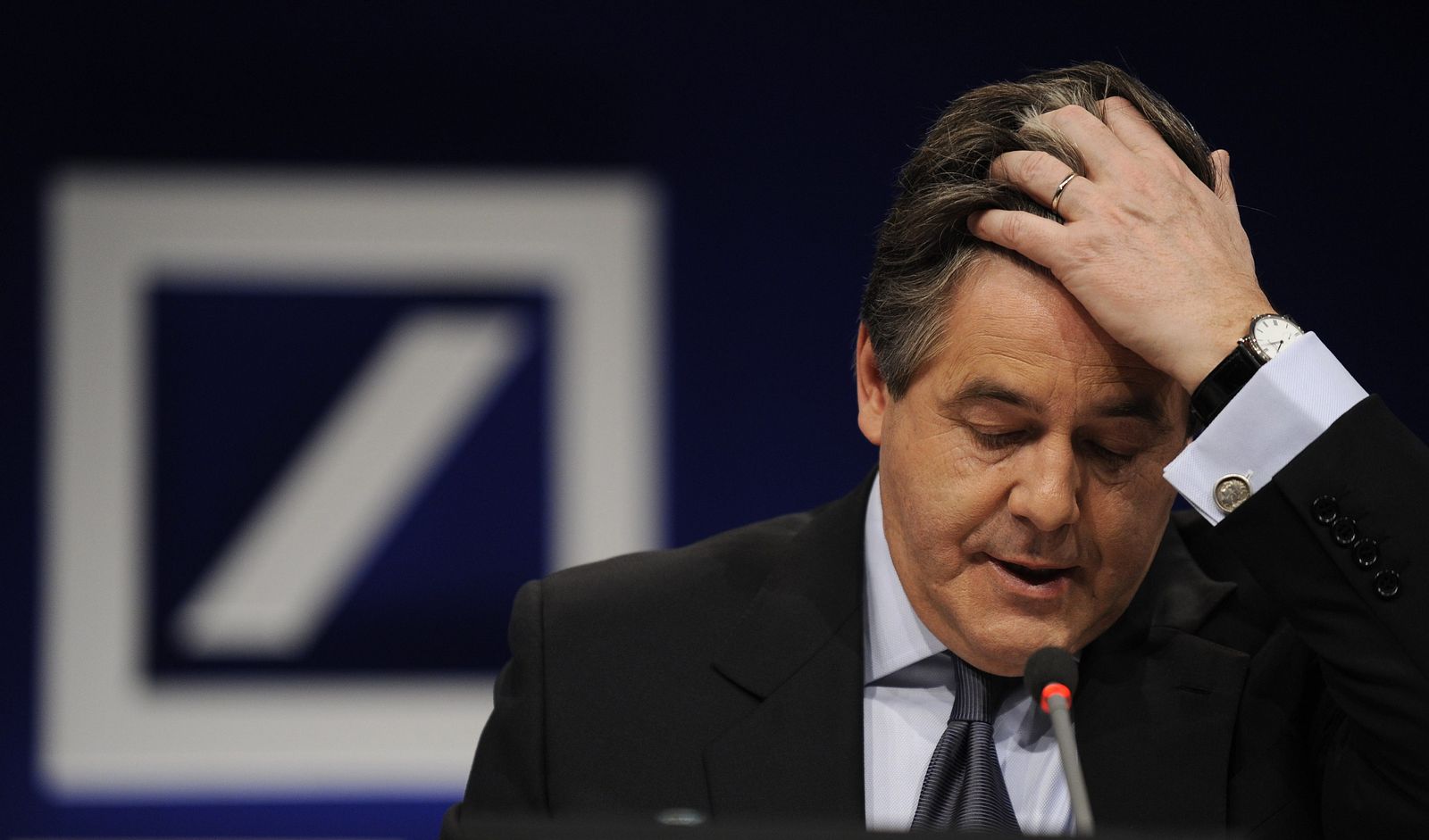