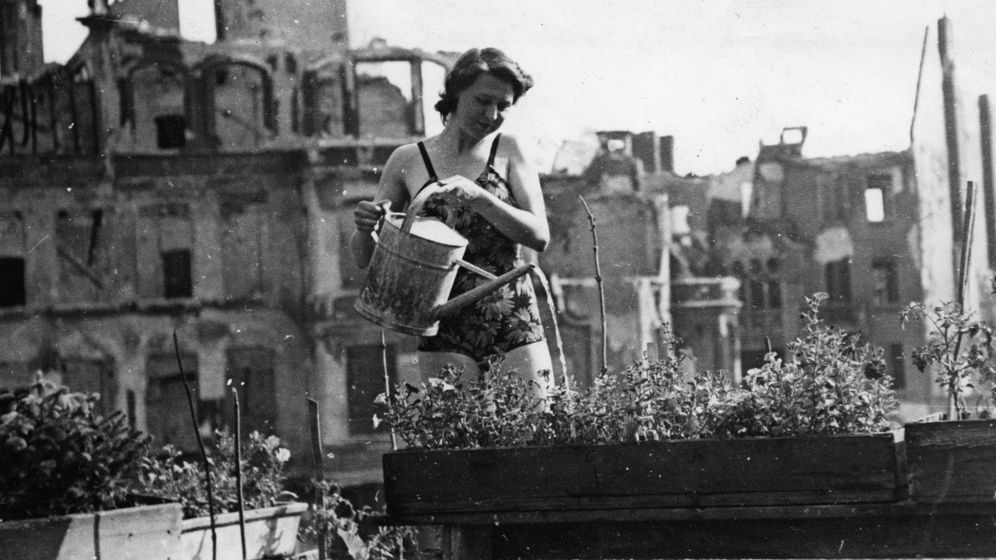 The soldier with the Iron Cross on his chest lies in the middle of the street. His steel helmet has rolled away. The Red Army soldiers are turning him onto his back and cleaning their weapons. They take no notice of the photographer kneeling to take the picture. He's already taken dozens of shots today -- this time he's just chosen a corpse for the foreground.

It's a scene from the final days of the World War II, taken somewhere in the center of Berlin. For decades this picture, along with thousands of others, lay in the archives of a Berlin publishing house. Unnoticed. It is only now that the collection has come to light.

The pictures capture a moment in the city that had reached the end of 12 years of dictatorship and a devastating war: Signs of those final battles, of death, destruction and hopelessness -- but also of life growing once again among the ruins. They are photos that portray a grotesque normalcy, in contrast to the better-known images of heroic liberation and optimistic reconstruction. They provide documentation of the city's downfall in the blink of an eye between an end and a beginning. A Berlin that was just beginning to free itself from its lethargy.

The prints fill whole cabinets, endless shelves, countless boxes and files. Few journalists ever visit the photo archive on the first floor of the publishing house on Alexanderplatz -- even photo editor Peter Kroh rarely comes by. The photos he uses at the Berliner Kurier newspaper are usually delivered by photo agencies, or come from stock that was digitized long ago.

But finally Kroh followed his curiosity into the archive. He wanted to fight his way through the mountains of material, "to lift out a treasure," he says. A book project from his publishing house gave the 60-year-old photojournalist the excuse. The book, entitled "Berlin After the War," is being published to mark the 65th anniversary of Nazi Germany's surrender.

Burning houses, mounted cavalry, wounded men in the gutters: Whoever took the pictures didn't get too close. Kroh assumes that few Germans dared get too close to Soviet soldiers with a camera in those days. The Red Army had a few photographers like Mark Redkin or Yevgeny Khaldei, often on the front lines. At least a few of the photos in the new book belong to them.

Yevgeny Khaldei was best known for his photo of Soviet soldiers hoisting the hammer and sickle flag above the Reichstag on May 2, 1945, a photo that symbolized the Red Army's victory. Apparently it wasn't the only shot of this type: Kroh found hundreds of pictures taken in from on top of the Brandenburg Gate with soldiers lifting their flags over the ruined metal of the Quadriga sculpture.

Next to the victorious poses, Kroh found a photo a totally unexpected image that was explained by the Russian writing on the back: Poet Yevgeny Dolmatovski recites his works. It's a cultural event, but what an event: The photo is taken on Pariser Platz, just a few days after the German surrender. The picture shows the bullet-riddled Brandenburg Gate flanked by ruins. In front, two tank barrels hover above the soldiers' heads -- as though the tanks went direct from battle to a poetry reading.

There are also pictures in the archive that show the daily lives of Berliners in those days. Many of them were taken by Otto Donath, who Kroh calls one of the "most genial post-war photographers." Not much is known about him, but his pictures speak for themselves. At a time when most Berliners were searching for something edible or for a roof over their heads, Donath was wandering the city with a camera.

His style isn't heroic. Unlike the propaganda of the Nazis and the victorious poses of the Soviets, or the images of reconstruction that would soon dominate the news, Donath shot children playing among the ruins, refugee women with bowls of soup, a gardener on her balcony watering her plants. It's no accident. They're not pathetic pictures, but rather images that show how people are reinventing themselves in this brief moment: Every-day absurdity, in other words.

Some of Donath's photos were published in "Daily Look," published by Soviet military authorities in the middle of May 1945, the first newspaper to be published in Germany after the war. The paper also published pictures from Soviet photographers, though mostly anonymously. Apparently the Red Army didn't want their identities to be known. "Probably out of modesty," Kroh says, "but also because they may have feared for their lives." A few of the photos were taken in April 1945, before the war was actually over.

How the archival material made it from the Soviet military authorities to the Berliner publishing house is unclear. Kroh thinks most of the photos were given by the Soviets to their East German comrades in the 1950s. Then, in the 1970s, a number of East German newspapers and magazines had their offices moved into a high-rise on Alexanderplatz and the trove was forgotten.

Until now. The vagueness of the title reflects the lack of precise information about many of the pictures. It's often unclear what the shots show, under what conditions they were taken and what purpose they were supposed to have served. Among the unsolved mysteries, for example, are the "Hitler photos" -- or at least dozens of pictures of a corpse that looks like the Führer. Kroh says it was retouched heavily and was probably a Soviet propaganda tool. He's just at the beginning of his research in the archive, though. Says Kroh: "The treasure hunt is really just starting."