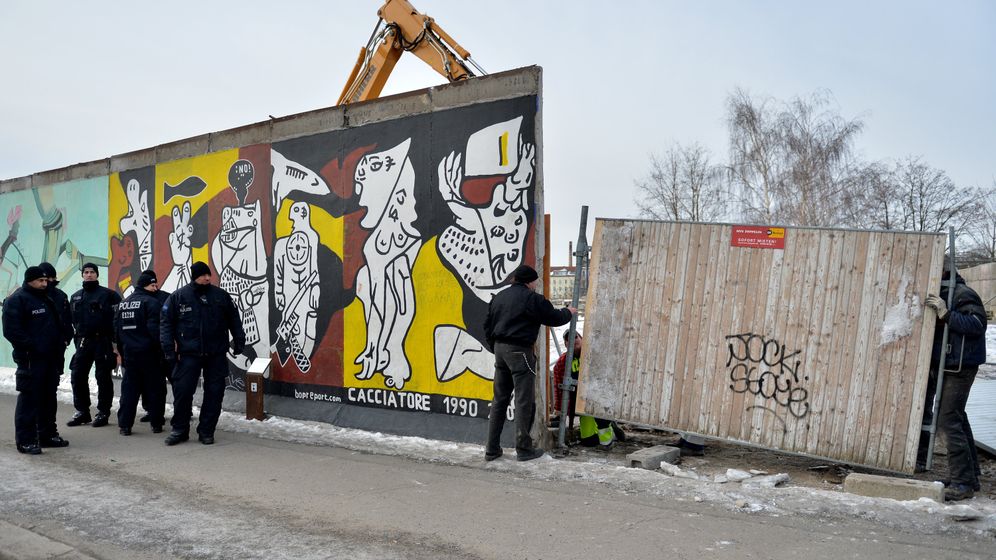 It disappeared in the night, just as it had come. On an August morning in 1961, Berliners woke up to find their city divided by the beginnings of what would become the Berlin Wall. On Wednesday, the city's residents woke to find that a chunk of it had been removed -- something a vocal minority seems to see as an event of equal historical outrage.

The 1.3-kilometer (0.8-mile) landmark, known as the East Side Gallery, is the longest remaining stretch of the Berlin Wall. Four of its sections were dismantled early Wednesday morning to make wake way for the construction of a luxury high-rise building. Anticipating protest from residents, some 250 police officers were deployed for the operation, a spokesman told the Berlin daily Der Tagesspiegel.

The first round of work was halted in early March after several angry protests at the site. At the time, the investor said he would attempt to find a compromise.

On Tuesday, members of the Berlin Senate and representatives of the district of Friedrichshain-Kreuzberg, as well as Mayor Klaus Wowereit, met to discuss possible solutions to the problem, including a land swap and rescheduling the construction -- but they were apparently unable to find an alternative.

The latest removal, which began at 5 a.m. Wednesday morning, brings the gap in the wall to 6 meters -- out of a total of 22 meters to be dismantled by developers to provide access to a site where a high-end apartment complex has been planned on the nearby bank of the River Spree.

Investor Maik Uwe Hinkel told news agency AP that the removal of the Wall sections was temporary, and would allow trucks to access the construction site. After a month of negotiations with city officials and the owners of adjacent property, he said he would no longer wait.

The development, part of the controversial "Mediaspree" riverside construction project, has struck a nerve in Berlin, where many residents accuse Mayor Wowereit's government of blighting the city with ugly, money-driven urban development and trampling the desires of ordinary residents to accommodate well-heeled investors.

The East Side Gallery dates back to early 1990, when some 120 international artists were invited to cover the largest remaining section of the Berlin Wall with murals. Today it is one of Berlin's most visited tourist attractions. At least 136 people died trying to escape from East Berlin over the Wall, and many residents want to see it preserved as a piece of the city's history and a colorful testament to reunification.

Members of the leftist anti-development group known as "Sink Mediaspree" were holding a vigil at the site on Wednesday morning, according to media reports. A somewhat less likely voice of dissent came earlier this month in the form of American actor David Hasselhoff, who led a march at the East Side Gallery on March 17 in protest of the removal.