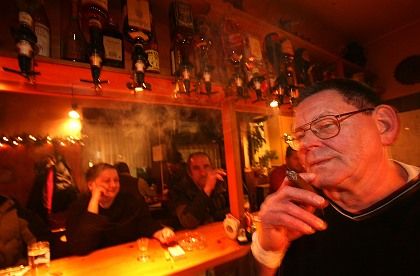 A ban on smoking in bars, restaurants and indoor public places has been on the books in many German states since Jan. 1.

As long as Helmut Meinecke runs this place, the ashtrays will stay on the tables. "Zur lustigen Mamma" -- "The Happy Mother" -- is the name of his corner bar in the St. Pauli district of Hamburg, a local joint the size of a living room, with a wooden bar, a jukebox and a slot machine.

Meinecke is a drinking man's raconteur, straight out of German lore -- the sort of guy you find all over the country, shrouded in cigarette smoke. "Eighty percent of my guests smoke," says Meinecke, 61, and on this evening in January they still do, although a smoking ban in Hamburg went into effect on the 1st.

Meinecke, wearing a gray turtleneck, with white hair and a red face, pours a beer behind the bar and talks himself into a rage. "I'm so mad I can't stand it," he says. "If my guests can't smoke I'll have to close the place down." So before he retires on a state pension -- after 42 years of work -- he'd rather let Werner and Edith and the rest of his guests light up. Never mind the law, Meinecke says. He'll keep doing his thing "until they arrest me."

He won't wind up in jail. But since the start of the year rebels like him have to think about fines of up to €1,000 ($1,400) and a possible business-license revocation. Three states had bans before Jan. 1, and eight more outlawed smoking in public buildings, restaurants and bars as of New Year's -- and a majority of smokers have complied. The state of Saxony will hop on the wagon this Feb. 1. Saarland and Rhineland-Palatinate join the party two weeks later.

Like so many laws in federal Germany, regulations against smoking aren't orchestrated from above, so the fines and exceptions and transitional periods are different in every state. But one thing all the bans have in common is that owners like Meinecke, who can't set up non-smoking rooms in their little corner bars, will lose out.

Don Quixotes like him nationwide have been tilting against the bans. Not everyone goes in for civil disobedience: One weapon of choice has been the petition. But to force a referendum, a knight-errant generally has to collect tens of thousands of signatures. Of course he can also resort to the court system, and legal complaints on constitutional grounds have been mounted so far by proprietors in Bavaria, Hesse and Baden-Württemberg.

Another method beloved by Germans is forming a club. The owner of a bar in Hamburg called Parallelwelt ("Parallel World") has turned her place of business into a "smokers' association." Anyone who becomes a member -- for €6 -- can come in as usual and keep smoking.

For Guests and Proprietors

The hour of clever solutions may have dawned for smokers and people who want to serve them. The future for rowdy tobacco fans in Germany may be outdoor winter gardens, or even glassed-in smoking rooms. For the guests of places like "Zur lustigen Mamma" in Hamburg, though, such solutions are nonsense. "This whole smoking ban thing is just paternalism," said Daniela Ilian, 59, who was drinking a beer in Meinecke's bar only because she could light up, too. "If it was really about health they would just outlaw cigarettes. But then the finance minister wouldn't get his cut." 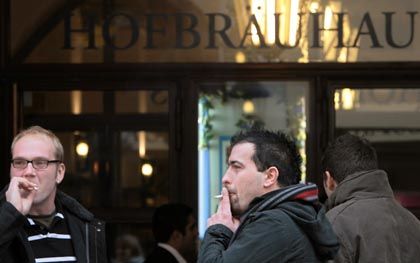 Out in the cold: Smokers have to go outside if they want to take a drag at Munich's world-famous Hofbräuhaus.

The state has hauled in more than €110 billion ($162.5 billion) in tobacco taxes since 1999. A full third of all adults in Germany still smoke, and around 140,000 per year die as a direct consequence of the habit. A government report on drugs and addiction also attributes the deaths of 3,300 non-smokers per year to the consequences of "passive smoking."

In Ireland, since the start of a smoking ban in 2004, researchers say the number of deaths by heart attack has fallen by around 11 percent. In Italy, where a smoking ban came into effect in 2005, heart attack deaths in the Piedmont region have also dropped by 11 percent among people under 60. And they dropped by a staggering 27 percent in the American county of Pueblo, Colorado in the year 2006 after a ban.

Meinecke knows the dangers of smoking; he quit himself after a heart attack 18 years ago. But health is just a side issue for him. The main principle is freedom.

He has a few people speaking for him in German politics. Hinnerk Fock, a local leader of the free-market FDP (Free Democrats) running for office in Hamburg, has recently hung the first poster of his anti-smoking-ban campaign in "Zur lustigen Mamma." The slogan "Free Choice for Guests and Proprietors" is now visible for everyone to read on Meinecke's brick wall.

Free Democrats in Hesse and Bavaria have also made a campaign issue out of the smoking ban, and in Bavaria the law is especially strict -- it will stamp out smoking even in Oktoberfest beer tents. The Free Democrats hope the issue will put their share of the vote over a five percent hurdle for the legislature, which would allow the FDP to (finally) re-enter Bavarian politics.

But there is one loophole for unrepentant tobacco-hounds in Bavaria already: a prostitute's place of business is still a free-for-all zone -- for guests as well as proprietors -- who want to light up.