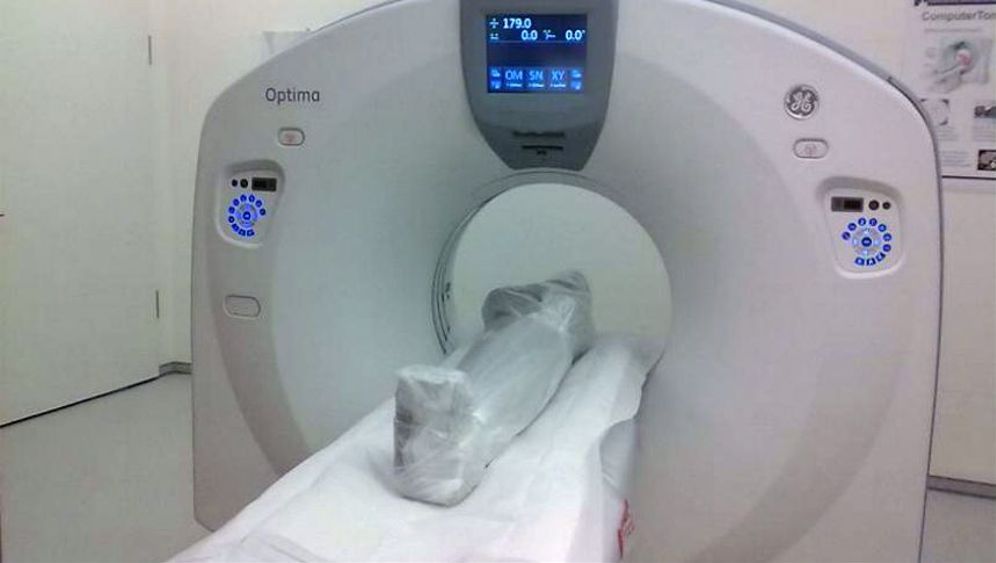 There was a lot of excitement when a boy in the state of Lower Saxony found a mummy in a sarcophagus in an attic last month. But many thought that once the mummy was examined, it would turn out to be a fake.

But after radiological analysis, it has become clear that beneath the bandages lies a human skull with an arrowhead in one of its eye sockets, in addition to plates decorated with hieroglyphics and bones wrapped in metal foil. The scans raised more questions than answers.

A 10-year-old boy discovered the sarcophagus in early August while poking around his grandmother's attic in the town of Diepholz. It had apparently been well hidden there for decades. The boy's father, dentist Lutz-Wolfgang Kettler, thought that his own father must have brought it and other souvenirs back from his travels in North Africa in the 1950s. A radiology appointment at the Diepholz hospital was supposed to help clear up questions as to whether the mummy contained actual human remains and how old they might be.

According to local daily newspaper Kreiszeitung, the mummy got a CT scan and X-rays last Thursday. The results, which showed human bones, came as a surprise even to Kettler. "No one expected that," he says. "Everyone thought it was a fake." This was partly because a Berlin archaeologist had determined the material used to wrap the 1.49-meter (4.9-foot) mummy dated back to the 20th century, and was probably machine-made linen or cotton bandaging.

The scans showed that the carefully wrapped object contains a skull, and a relatively intact skeleton. But all of the bones except for the skull are wrapped in a kind of metal foil, making further X-ray analysis impossible. In addition to the arrowhead in the eye socket, the skull is also wrapped with a metal diadem.

There's no way this is a typical Egyptian mummy, says Andreas Nerlich, head of pathology at Munich's Bogenhausen Clinic. "We're dealing with an imitation," he says. "But a human body, and perhaps more than one, were used to make it."

A missing neck vertebrae points to the possibility that the bones could belong to more than one body. "The skull is without a doubt real, and I believe the other bones are too," says Nerlich.

The mummy expert is baffled by the metal covering the skeleton, however. "Someone went to a lot of trouble to wrap the bones in this covering," he says. "Perhaps because they anticipated an X-Ray examination, because this is definitely a hindrance."

A mystery that persists is who prepared the remains, and when. And that is a question that may interest police. On Tuesday the Kreiszeitung reported that authorities had confiscated the mummy, which Kettler had been storing in his garage. It will now be examined by forensic experts in Hamburg, the paper said. "If it turns out that the death occurred 3,000 years ago, then we won't pursue the case any further," said Jann Scheerer, spokesman for the Verden public prosecutor's office. "But we will if the person responsible for the obviously violent death could still be alive."

As the owner of bones of uncertain provenance, Kettler has mixed feelings about the authorities getting involved. "It's a somewhat uncomfortable situation," he admits. "I insist on further examination."

The 53-year-old is mostly interested in how his father acquired the mummy. He'll never be able to ask him himself, however, because his father died 12 years ago. One possibility is that the peculiar North African souvenir was a macabre hoax. "My guess is that someone played a huge joke," says pathologist Nerlich.

Kettler is mystified, and sees it as his duty to find answers. "I am asking myself why the sarcophagus was stored in such a hidden place, and why no one ever spoke of it," he says.