The planned visit by the United States president to Germany at the end of next week is creating friction between Barack Obama and German Chancellor Angela Merkel of the conservative Christian Democrats (CDU). 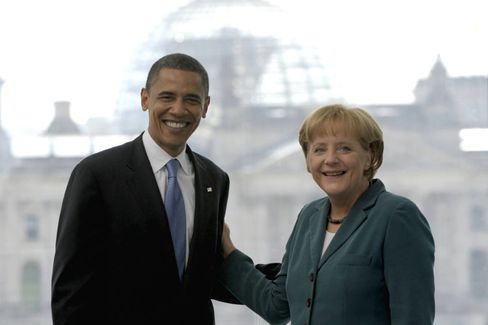 German Chancellor Angela Merkel greeted then presidential hopeful Barack Obama in July last year in the Chancellery. Feathers were ruffled, however, when Merkel refused to let the candidate hold a speech in front of the Brandenburg Gate.

The stopover is expected on Thursday, after a widely anticipated address by Obama on his Middle East policies in Cairo on June 4 and prior to his visit in France on June 6 to commemorate the 65th anniversary of the landing of the Allied troops at Normandy in 1944. In Germany, Obama plans to skip the capital in Berlin and instead visit the eastern states of Thuringia and Saxony.

And even there, the German government has had little influence over his itinerary. The White House has so far blocked the wishes of the German government, which would like to see the president appear side-by-side with Merkel and local dignitaries and attract massive publicity during his stops in Dresden and Weimar. With support of the Chancellery, Thuringia Governor Dieter Althaus and Saxony Governor Stanislaw Tillich, both members of Merkel's CDU party, suggested that Obama appear at Dresden's Zwinger Palace museum complex and Weimar's Anna Amalia Library and to mix with crowds in both cities. But Obama's advance team rejected the suggestions, SPIEGEL has learned.

Instead, Obama will be focusing his attention the Buchenwald concentration camp memorial site. There, the trip will take on a personal dimension -- Obama's great-uncle, Charlie Payne, took part in the liberation of Ohrdruf, a Buchenwald satellite camp, while serving in the 89th Infantry Division during World War II.

Obama is also expected to visit the US military bases in Ramstein and Landstuhl. At Landstuhl he wants to visit wounded troops and their families at a military hospital.

A conversation with the chancellor is still planned in Dresden, where Obama will be staying on Thursday night.

The German government has expressed hope that the White House might still change its mind about Obama's itinerary.

Obama and Merkel got off to a difficult start last July, when the then-presidential candidate spoke to a crowd of over 200,000 in front of Berlin's Victory Column. Chancellor Merkel had rejected his request to make a prestigious appearance in front of the capital's famous Brandenburg Gate, Berlin's most important symbol.

For his part, French President Nicolas Sarkozy -- who will host Obama both in Paris and at Normandy -- seems content to just poke fun at Merkel over her scheduling tug of war.

"Merkel can't even host the US president in the capital city," he is quoted as saying, "I can meet him in Normandy and in Paris."