They are still coming. Every day, individuals and small groups continue to make their way down Duisburg's Karl Lehr Strasse --- through the overpasses at the entrance to the former freight rail station to the spot where many of the 21 victims of the 2010 Love Parade lost their lives.

They carry candles, wreathes and notes of condolences. It is quiet; almost two weeks after the disaster, the street still has not been reopened to traffic.

But such reverential silence is far from the norm in Duisburg these days. On Wednesday, representatives of a law firm commissioned by the city to investigate the degree to which city leaders might be culpable for the disaster presented their findings. And, not surprisingly, it triggered yet another round of finger-pointing, protestations of innocence and speculation about the future of Duisburg Mayor Adolf Sauerland's political career.

The city "had no  responsibility for the security of the event as a whole," the 37 page document reads. There are, it goes on, "no indications at present" that city employees failed to fulfil their legal responsibilities "thereby contributing to or even causing the accident."

Finding Fault with the Organizers

The report, put together by the law firm Heuking Kühn Lüer Wojtek, did, however, find fault with the event organizers Lopavent. The document accuses Lopavent -- a company set up by Rainer Schaller, who founded the German fitness studio chain McFit, for the purpose of staging the Love Parade -- of having violated security guidelines. "We cannot exclude that these violations became relevant in connection with the accident," the report concludes. Duisburg police are likewise taken to task for having parked several vehicles on the ramp which served as both and entryway to and an exit from the event site. Most of the deaths occurred in a crush of visitors at the base of the ramp.

It is unclear to what degree the new report will exonerate the city, given that it was commissioned by the municipality itself. And it is far from the final word in the attempt to identify whether any person or party can be held culpable for the disaster.

Ralf Jäger, the interior minister of North Rhine-Westphalia -- the state where Duisburg is located -- told the German public television station ZDF on Wednesday night that "at no time" did the security plan created by Lopavent for the event work correctly "and at some point completely collapsed." In reference to accusations that the police had not responded well once the entrance to the event site became dangerously congested, Jäger told the domestic affairs committee of the North Rhine-Westphalian parliament on Wednesday that "it is shabby to first call the police for help because the event has gotten out of control and then try to pass the buck to them afterwards."

The head of the German federal police union (GdP) accused city officials of scapegoating the police. "The police and other experts were pushed up against the wall with polical pressure during the preliminary planning," said Konrad Freiberg. "Their objections and reservations weren't taken into consideration and critical voices were muzzled. The political ambition of city leaders and the economic interest of the organizer to adorn the city with such a mega event, suffocated any professional discussion over the risks."

The deaths occurred in the late afternoon of July 24 as thousands of partygoers were trying to enter the event site. The site had been given a permit for 250,000 visitors, though the organizers had been expecting up to twice as many. Event plans had foreseen all visitors approaching the entrance ramp from either end of a series of overpasses, with the main ramp being planned as the only entrance and the primary exit.

When a knot of people developed at the top of the ramp in the late afternoon, police were called in to establish barricades to prevent a crush of visitors at the bottom of the ramp from growing in size. The effort failed, with many of those who died trapped in a dense crowd at the base of a narrow staircase leading out of the entry ramp.

The relevance of the report's mention of the police vehicles parked on the ramp appears to be called into question by video images of the disaster, taken by 16 security cameras set up around the site. The images show that, whereas the base of the ramp was hopelessly overcrowded at the time of the deaths, congestion in the middle of the ramp, where the police vehicles were parked, was limited.

Pressure on Duisburg Mayor Sauerland to resign has been high since the disaster, with some colleagues from his own party, the Christian Democratic Union, even calling on him to quit. He has so far refused -- and several city politicians have begun questioning the need to jettison him. On Thursday, Green Party officials in the city government suggested they would not support efforts to vote him out of office.

In addition to the 21 people who lost their lives, a further 500 were injured. Twelve days after the tragedy, only one young woman remains in the hospital, according to Duisburg police. 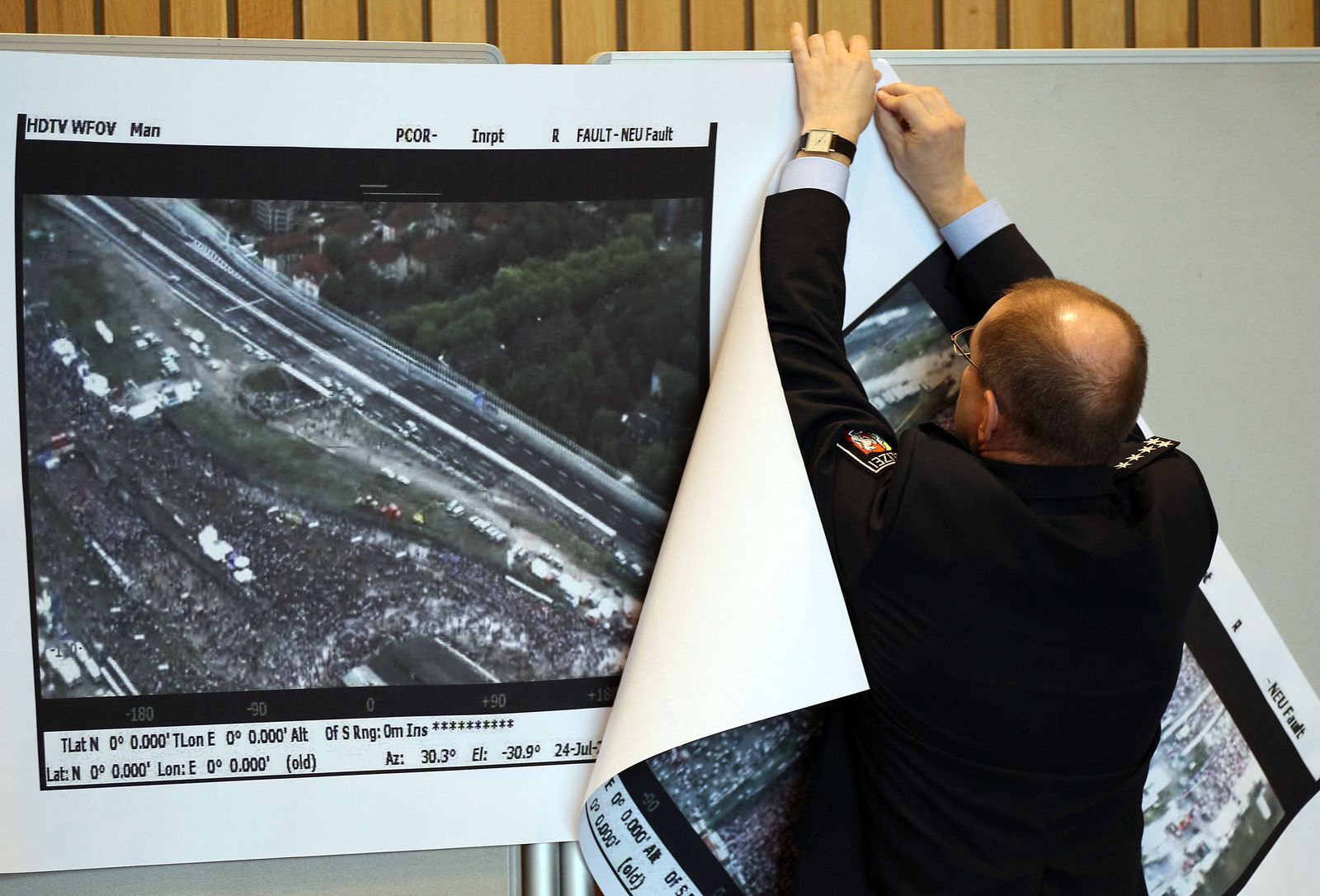 A police official hangs pictures from the Love Parade on the wall ahead of a state parliamentary committee meeting on Wednesday.