SPIEGEL: Professor Heitmeyer, you have been studying the condition of the Germans for the last 10 years. How are we doing?

Heitmeyer: Not very well. The growing social divide is corroding the sense of community, and society is poisoned. Social disintegration is dangerous, especially for disadvantaged groups. Substantial segments of society believe that they are more valuable than others. Only those who achieve something, who are useful and efficient, count for something.

SPIEGEL: Hasn't that always been the case?

Heitmeyer: Yes, but the principle of rationality, which has its place in the economy, has increasingly permeated our thinking, finding its way into living rooms, schools and social relationships. This application of economic principles to the valuation of human beings is inhumane. Immigrants, the homeless, the long-term unemployed, the disabled, all of these people are worth less than others according to these standards.

SPIEGEL: Is this really worse in Germany than elsewhere?

Heitmeyer: Status-based thinking is also widespread in Germany. This sets off a spiral of devaluation, especially in times of crisis. Someone who is afraid of moving down in the world, or is worried about being rendered useless tomorrow, is more likely to denigrate weaker people, to prove to himself that there is still someone below him on the ladder.

SPIEGEL: In your study, you measure the temperature curve of society with the somewhat cumbersome concept of "group-specific misanthropy." Why so complicated?

Heitmeyer: Racism is certainly easier to grasp, but it isn't just people with foreign roots who are discriminated against in our society. The long-term unemployed, the homeless and the disabled are also devalued. If you belong to one of these disadvantaged groups, your chances of becoming integrated and recognized are very poor.

SPIEGEL: Who are these people with such hostile attitudes?

Heitmeyer: We tend to focus on young people, some of whom are violent and make the headlines. But it's the older people, those 60 and up, who have particularly hostile attitudes. This has consequences.

SPIEGEL: Are grandma and grandpa teaching their grandchildren to hate foreigners?

Heitmeyer: The attitudes of the older generation are indeed transferred to young people in many cases, because older people have a lot of credibility among young people. This has to be carefully analyzed against the background of an aging society. Youth programs don't do any good, either.

SPIEGEL: The special aspect of your study is the long observation period. How have we developed in the last 10 years?

Heitmeyer: It isn't uniform. But society is more divided today than it was 10 years ago. Xenophobia, racism and the denigration of the long-term unemployed are on the rise once again, especially after the crises that began in 2008. Some 92 percent of society believes that the rich are getting richer and the poor even poorer.

SPIEGEL: Germany has just discovered that it is home to active right-wing terrorism. Were these individuals outside of society?

Heitmeyer: I'm appalled that many, especially in the political establishment, act as if we were dealing with a few outsiders in an otherwise intact and humane society. But it isn't quite that easy to distinguish between good and evil. The terrorists (Uwe) Böhnhardt, (Uwe) Mundlos and (Beate) Zschäpe derived their justification for committing acts of violence from a reservoir of misanthropic attitudes in society.

SPIEGEL: A reservoir? Can misanthropy be accumulated?

Heitmeyer: The acceptance of violence and the willingness to commit violent acts among people with right-wing populist views increased by 16 percent from 2010 to 2011. This is everything but good news for social climate.

SPIEGEL: How many people in Germany sympathize with the right-wing populists?

Heitmeyer: About 10 percent of society has thoroughly right-wing views.

SPIEGEL: How did you determine that?

Heitmeyer: We confronted 2,000 people with the following statements: "To preserve law and order, we have to crack down on outsiders and troublemakers. I sometimes feel like a stranger in my own country, because of the many Muslims in Germany. Many Jews are trying to use Germany's Nazi past to secure benefits today and make the Germans pay for it." According to our criteria, a person who clearly agrees with six of these types of statements has right-wing populist views. In doing this, we are already applying a very strict standard.

SPIEGEL: What has changed in the last 10 years for a foreigner living in Germany?

Heitmeyer: He lives in a society that has skeptical to hostile opinions about Muslims, in particular. More than 50 percent of people surveyed today say that they would have a big problem moving into an area where many Muslims live. This is an increase of 6 percent in the last seven years.

SPIEGEL: The debate over Thilo Sarrazin and his controversial book, "Deutschland schafft sich ab" ("Germany Does Itself In"), has shown that many members of the educated classes also hate foreigners. Doesn't education protect against xenophobia?

Heitmeyer: Education is generally a safe buffer. But we have noticed that this buffer is disappearing. Many of those attending Mr. Sarrazin's readings were middle-class people in loden coats. We use the term "crude middle-class outlook" in this context. It is the contempt for those who are seeking to improve their social status.

SPIEGEL: What triggers a misanthropic mood in the country?

Heitmeyer: There are signal events, like Sept. 11, 2001, the introduction of the Hartz IV (reforms to welfare payments for the longterm unemployed) and the economic crisis. Such events unnerve people. One reaction is to denigrate the weaker members of society. But the gradual processes are also dangerous, because they are not the subject of debates, like disorientation, the economic attitudes I mentioned earlier and, most of all, the deflation of democracy.

SPIEGEL: Don't we live in a vital democracy anymore?

Heitmeyer: Our democracy is a functioning shell, as evidenced by low voter turnout. Our numbers show that many people have already given up. They no longer have any expectations of politics.

SPIEGEL: Our impression is that democracy is actually quite vital. In Stuttgart and elsewhere, citizens are demanding more of a say. In Frankfurt, people are sleeping in tents to protest capitalism. This isn't exactly a deflation of democracy.

Heitmeyer: Vitality and protests are indeed in evidence wherever there are emotionally exploitable events. But these are exceptions. Normally the people who really have a reason to protest lack the strength to do so. The fears of social decline and unemployment are destructive and crippling to people.

SPIEGEL: But economic output is growing and unemployment is decreasing. Germans seem to be doing rather well, despite the financial and debt crisis.

Heitmeyer: We are doing well, compared to the Greeks, the Spaniards and the Italians. That's comforting. But many things are also suppressed. In our surveys, people point out that even though society is not doing well, things are just fine in their personal lives. People tend to build a positive image of themselves to avoid being overrun by social uncertainty.

SPIEGEL: Isn't it possible that people really are doing well?

Heitmeyer: Our numbers show that people are very fearful of social decline and ostracism.

SPIEGEL: If your numbers actually reflect the truth, how could the divide in society be closed again?

Heitmeyer: We have to improve social equality and the equality of all people. Equality is just as important to human society as emotional and physical integrity.

SPIEGEL: What constitutes the value of a human being?

Heitmeyer: That's the €100,000-euro question. In a humane society, it is important that those sitting at the top of the ladder are treated the same as those at the bottom. Can someone at the bottom live a life of dignity? In Germany, human dignity is a supposedly untouchable value, but unfortunately that's not at all true anymore.

SPIEGEL: How do elites treat the weak?

Heitmeyer: Significant segments the elites and higher earners are increasingly withdrawing from a mutually supportive society. They claim the privileges of the establishment, and they fight against a minimum wage, the wealth tax and the inheritance tax, even though the policies of redistribution have been in their favor for years. This is class warfare from above. It shows that the core standards of this society are in great jeopardy. Some 64 percent of society believes that striving for justice is pointless. Solidarity and fairness, values that are vital to the cohesion of a society, are being eroded.

SPIEGEL: And this can be blamed on the "authoritarian capitalism" you write about?

Heitmeyer: Capital has been able to impose its maxims without obstruction for years. Social integration is not on the list of interests. Instead, the entrepreneurial self is in demand. This maxim has now penetrated into the way people think.

SPIEGEL: But even the publisher of the center-right daily Frankfurter Allgemeine Zeitung, Frank Schirrmacher, writes that the left could very well be right this time.

Heitmeyer: The ship can't be turned around that quickly. Neo-liberal concepts have found their way into everyday life and are being used as weapons against disadvantaged groups. This pattern of thinking will not be thrown into disarray suddenly just because elites are realizing that things are threatening to blow up in their faces.

SPIEGEL: The results of your research paint such a dark picture of our country that one could very well believe that Germany is on the verge of revolution.

Heitmeyer: We don't want to be too pessimistic. We use scientific tools to combat whitewashing and indifference. I do not recognize a potential for unrest in Germany at the moment. Instead, I suspect that apathy and disorientation are on the rise. This is not a good sign for our country. On the whole, we lack any kind of vision on how things are to continue. 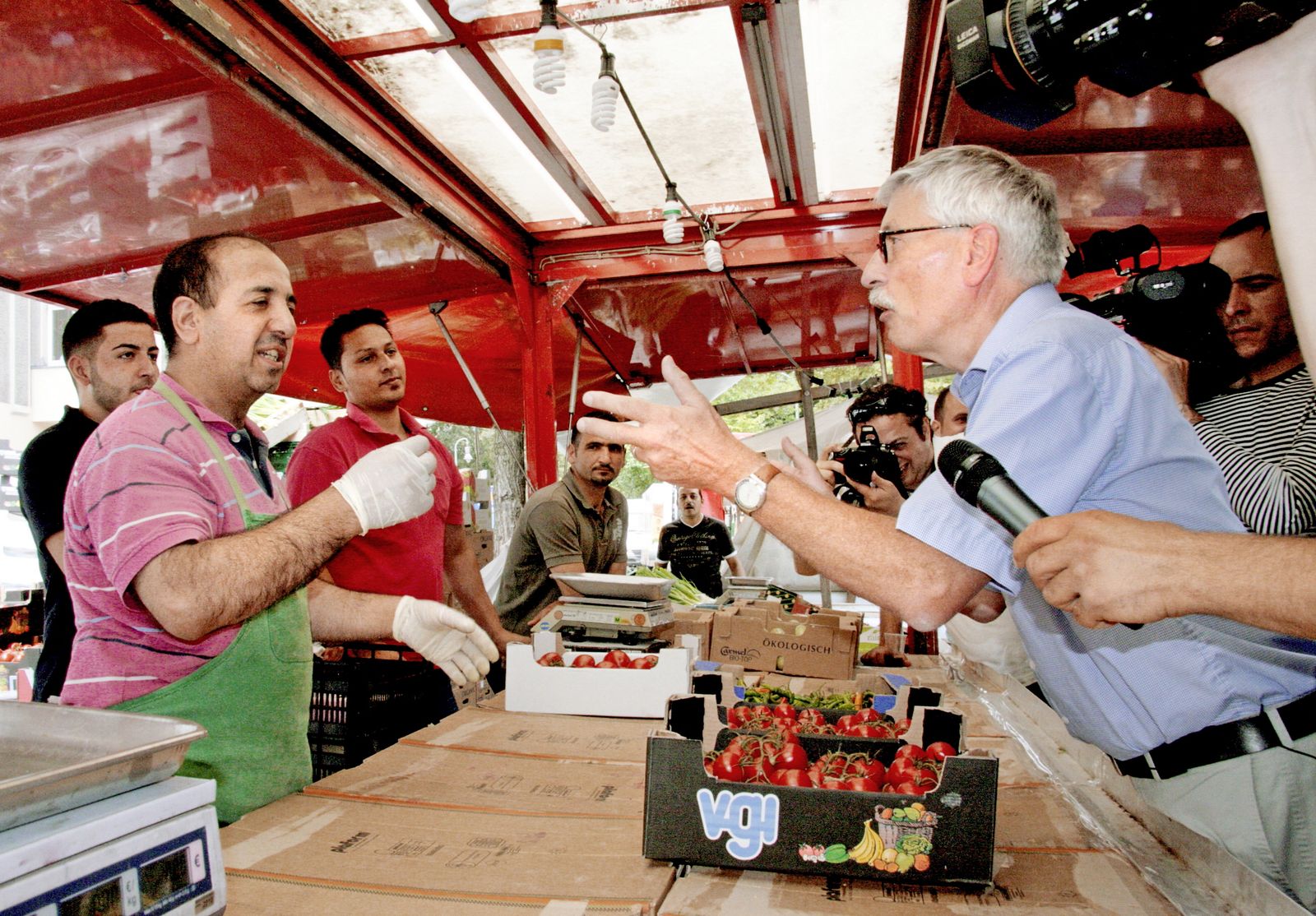