SPIEGEL ONLINE: Mr. Marx, someone studying Islam learns that the Prophet Muhammad was born on the Arabian Peninsula in A.D. 570 and died in Medina in A.D. 632. Is there any reason for doubting that this is true?

Michael Marx: Those are provisional dates that we should hold on to until there are better figures. The Islamic sources are rich with material about the person of the Prophet and his life story. Some of it is has elements that are somewhat mystical. But we can generally rely on the solid core of Islamic tradition.

SPIEGEL ONLINE: There is a group of prominent German Islamic scholars, who are becoming increasingly aggressive about questioning whether the existence of the Prophet is even historically accurate. The theory got its most recent backing from the University of Münster's Professor Muhammad Sven Kalisch, who is in charge of training teachers for Islamic education at the secondary-school level. The Ministry of Education of the state of North Rhine-Westphalia is now planning to calm the waters by appointing an additional professor of Islamic pedagogy. Are we witnessing a split into two camps?

Marx: I don't see it that way. But we should note that what we have from Kalisch at the moment are only the things he has allegedly said. From them, it sounds like he has decided to back the thesis of Professor Karl-Heinz Ohlig, which Ohlig publicized three years ago in his book "Dark Beginnings" ("Die dunklen Anfänge"). There, Ohlig posits that the Koran is a Christian text and that Muhammad probably never lived. But this group, which also includes the numismatist Volker Popp and some others, is very small. I'd say that their position isn't really within the realm of accepted scholarship.

Marx: There are far too many pieces of evidence that make Ohlig's thesis that the Prophet never lived untenable. In the 14 centuries of polemics between Christians and Muslims, this issue has never made an appearance. Even in Syrian-Aramaic sources, however, there is some documentation about the prophet from an earlier time.

SPIEGEL ONLINE: Your scholarship focuses on the early period of Islam and the Koran. What is the evidentiary situation? How could we prove that the Prophet lived?

Marx: You have to be a bit delicate about it. In general, when it comes to history, you can't point to any scientific proof. How would we, for example, prove the existence of Charlemagne? We can't conduct any experiments; we have to work with evidence. And, for this issue, the evidentiary thread is the Koran. In this case, the evidentiary situation is better than it is for any other religion. We know of manuscripts of the Koran and Islamic inscriptions already 40-50 years after the Prophet died. It would be hard to explain the Koran, if you took the prophet out of the equation. Ohlig claims that Islam was actually a Christian sect up until the Umayyad Caliphate, that is, the eighth century. In this case, I run into this massive issue: It doesn't match up with the text of the Koran. Why isn't Christ a more central figure in the Koran, then? You hear about Abraham, Moses and Noah much more frequently.

SPIEGEL ONLINE: And what about with the format of the Koran? 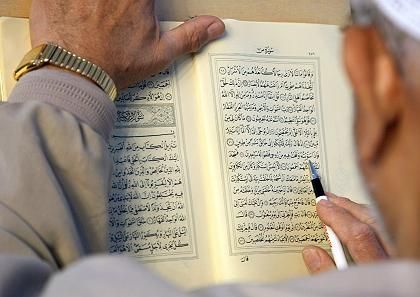 For Muslims, the Koran is the unadulterated word of God.

Marx: That's the second evidentiary thread. As can be shown in even linguistic terms, the Koran is a kind of speech. It isn't a narration like the New Testament, a piece of correspondence like the epistles of Paul, an account of the Apocalypse or a Psalm. The genre only makes sense when I have a person that I can attach it to -- a charismatic orator, a prophet. Why would a community that doesn't have a prophet invent one after the fact and make up a text, which is then also Christian, as Ohlig sees it? Ohlig's thesis is uneconomical; it raises more issues than it solves.

SPIEGEL ONLINE: In other words, if the Prophet did not live, in order to explain the literature, there must have been an enormous conspiracy.

SPIEGEL ONLINE: Are you saying that Ohlig and his fellow combatants are either demagogues or pseudo-scholars?

Marx: It's not for me to make that type of judgment. But that's what it seems like to me. Of course, it's perfectly legitimate to discuss issues. And the Koran definitely contains a number of open questions. We at the Corpus Coranicum project (see author box) are first trying to conduct basic research before deriving overarching theories.

SPIEGEL ONLINE: Muhammad Sven Kalisch operates in a sort of border region, that is, between science and theology. And, then, he's supposed to be training religion teachers, too. The Coordination Council of Muslims in Germany (KRM) isn't going to support him anymore because they believe that Kalisch is questioning fundamental elements of the Islamic faith. Is it conceivable that a person can be a Muslim and at the same time say that the Prophet might not have even ever lived?

SPIEGEL ONLINE: Mr. Kalischi is a Zaidi Shiite, not a Sunni. Does affiliation with this branch of Islam allow for another image of Muhammad, which could explain these pronouncements?

Marx: At least not that I know of.

SPIEGEL ONLINE: By taking this position, Mr. Kalisch has once again ignited the debate in Germany -- and that's something that won't escape the notice of the Arab world. For example, a historian at the Free University of Berlin's Institute of Islamic Studies, Gudrun Krämer,has said in an interview that Kalisch's isn't an isolated viewpoint.

Marx: Ms. Krämer has been wrongly -- that is, incompletely -- quoted. For example, she has said very clearly that the majority of Islam scholars adhere to the details that have been handed down, and she in no way numbers among those who challenge the existence of the Prophet. But, unfortunately, the imprecise quotes have been published in a number of Arabic newspapers.

SPIEGEL ONLINE: Does this have any consequences for someone like you, who also cooperates with Muslim researchers from abroad?

Marx: By all means, something like this has the consequence of bringing discredit to Western scholars of Islam. Rumors and reports like this spread very quickly in the Internet age. We at the Corpus Coranicum don't want to be associated with it. We have Muslims and non-Muslims working side by side, and we have very trusting collaborative relationships with institutions in the Arab and Islamic world.

SPIEGEL ONLINE: Why is research on Muhammad such a sensitive topic at all? After all, according to Muslim dogma -- differently than Jesus in Christianity -- the Prophet was just an exemplary person whom God selected to convey a message but did not endow with divine attributes. We already witnessed indications of this sensitivity in the controversy over the Muhammad caricatures in Denmark.

Marx: The best way to explain these fierce reactions is to say that many Muslims feel that it is tantamount to continuing to fight the battle between the West and the Islamic world -- which they still see as being waged -- but on another level. That is often interpreted as being an attack on their identity, as psychological warfare.

SPIEGEL ONLINE: Could we ever see the thesis -- that the Prophet Muhammad might not have ever lived -- brought up as a matter of discussion in an Islamic university?

Marx: I wouldn't know where.

SPIEGEL ONLINE: As a researcher, how do you steer clear of this tense issue? You use what is a completely critical-historical approach. As long as your findings don't contradict mainstream Muslim theology, it's no problem. But what happens when it does?

Marx: Well, then it would probably be a problem. But we're still a good way off from that situation. Don't forget that what we're doing here is basic research. The Koran deserves to be studied in a serious, scientific manner. I think it's essential that we take these steps with Muslims. We're doing that with our (Corpus Coranicum) project here at the Berlin-Brandenburg Academy of Sciences. What the Muslim community takes out of it in terms of inspiration and whether it uses it as a foundation for a process of some type of reform -- that's its own issue. Pragmatic coexistence probably continues to be much more powerful than the force of philology, which we have a tendency to overestimate.