It's early last Wednesday morning, and work in the harbor of Sassnitz-Mukran on the island of Rügen, on Germany’s Baltic coast, is going ahead at full steam. Dark-blue pipes are loaded onto the Oslap Scheremeta, a 90-meter-long cargo ship flying the Russian flag behind its bridge. It belongs to Gazprom, the Russian state energy company.

A ship-tracking website shows that Russian ships are waiting for the pipes about 90 kilometers to the east, south of the Danish island of Bornholm, where they are to be installed by the Fortuna, a pipe-laying ship. They’re installing the final section of the Nord Stream 2 gas pipeline.

The first of the two planned pipes is already completed. The second is set to be finished when the weather is a bit calmer. After years of planning and construction, the pipeline has the potential to provide around 55 billion cubic meters of gas to Europe every year.

Along with the Fehmarn Belt Tunnel, a train and car tunnel now being constructed between Germany and Denmark, Nord Stream 2 is the largest and most controversial construction project in the Baltic Sea region. The companies involved have invested billions in the pipeline. But the price the German government is going to have to pay has the potential to be a lot higher. Few German infrastructure projects in recent decades have been as costly in terms of political capital.

On Thursday, German Chancellor Angela Merkel is making her first visit to U.S. President Joe Biden in Washington since he took office. The dispute over Nord Stream 2 is a large obstacle that needs to be removed if the closeness between the two countries is to be firmly re-established following icy diplomatic relations during Donald Trump’s presidency.

Much like his predecessor, Biden has a strong aversion to the project, because it links Berlin with Moscow and because the Americans would like to sell their own gas. Unlike Trump, though, the current president wants a strong relationship with Germany. He needs the Germans to support his tough policies against China. That prompted Biden to lift the sanctions against Nord Stream 2’s operating company in May, at least for the time being.

Nevertheless, Merkel knows that the subject is burdening the relationship. "Nord Stream 2 is a disruptive factor," says a German diplomat. He says that Berlin needs to accommodate Washington to demonstrate that it is serious about having a good relations.

But what kind of concession could it bring to the table? Washington and Berlin are negotiating under high pressure. Merkel’s foreign policy adviser, Jan Hecker, traveled to the U.S. in mid-June in an effort to find a solution. Talks also took place between Merkel’s office and the White House last week.

One solution could be to offer Ukraine compensation for its loss in significance as a transit country for Russian gas. Among other things, Berlin is discussing a possible partnership with the government in Kyiv on hydrogen production. And there is talk of Germany pledging to invest billions in updating the Ukrainian gas network, which is in a state of disrepair.

Concessions like that could help defuse the tense issue before Merkel meets with Biden at the White House. But some of the goodwill the new U.S. government is extending to Germany has already been used up by the chancellor’s insistence on the controversial pipeline.

It’s unclear why she has stuck to the project despite criticism from her own party and Germany’s partners in Washington – especially given that there are doubts whether Nord Stream 2 is even crucial to the German gas supply. There is also strong resistance from within the European Union.

The pipeline, which allows Russia to circumvent Ukraine as a transit country, has set off protests, particularly in Eastern Europe. Following the annexation of Crimea and the Russian war in eastern Ukraine, the Poles, the Baltic states and the government in Kyiv saw little justification for a pipeline that makes the EU more dependent on Moscow – and Ukraine more susceptible to Russian blackmail. Merkel’s policies toward Russia have lost credibility as a result.

The chancellor has also encountered resistance within her own party. Norbert Röttgen, the chair of the German parliament’s Foreign Affairs Committee and likewise a member of the center-left Christian Democratic Union (CDU), called for construction of Nord Stream 2 to be halted following the poisoning of Russian opposition politician Alexei Navalny.

The pipeline has even long been controversial within Merkel’s Chancellery. Merkel’s former security advisor, Christoph Heusgen, who was until recently Germany’s ambassador to the United Nations in New York, is also considered an opponent of the project.

The chancellor hasn’t provided any convincing reasons for her position. She has emphasized that Nord Stream 2 is a private-sector project, even though this is an absurd claim. Nothing is as political in Russia as the gas industry, whose revenues keep Putin’s whole system running. Arguably, it is a confluence of factors that have led Merkel to press ahead with the pipeline.

One important factor is likely about a domestic, and not a foreign, calculation. The center-left Social Democratic Party (SPD), Merkel’s long-time coalition partner, has long been in favor of the pipeline.

The chancellor isn't providing any convincing reasons for her positions.

People close to the chancellor say that in internal meetings, Merkel had repeatedly pointed out that former German Economics Minister Sigmar Gabriel used everything in his power to push Nord Stream through. When Brussels conducted a review of whether Nord Stream 2 is permissible under European law, Merkel had signaled she would accept the result.

Gabriel, on the other hand, had exerted strong pressure on the European Commission not to stop the project.

The reasons for backing the project differ greatly within the SPD. Merkel’s predecessor, Gerhard Schröder, heads the shareholders’ committee of the controversial Nord Stream pipeline company. Mecklenburg-Western Pomerania Governor Manuela Schwesig, meanwhile, is pushing the policy based on local economic concerns, given that the pipeline's terminus in Germany in the town of Lubmin in her state.

Members of the SPD don’t share the view that the chancellor allowed herself to be pressured into supporting the project by her coalition partners. They dismiss that as being an amusing tale coming out of the Chancellery. They say that with Nord Stream, for once, there was full agreement within the coalition government – that both partners – the conservatives and the SPD – wanted the new pipeline.

Part of that owes to the fact that the project goes beyond economics – it’s also about foreign policy. German Foreign Minister Heiko Maas of the SPD sees the pipeline as a means of staying in touch with Russia. He argues that a "strategy of burned bridges" is not only wrong, but also dangerous, and that it would push Russia into close economic and military cooperation with China. He believes that would run counter to the interests of Germany, Europe and the U.S.

Vice Chancellor Olaf Scholz likes to point out that all countries involved in the Nord Stream dispute are stubbornly representing their national interests: the Poles, the Baltic States and, of course, the U.S. He says that Washington is accusing Germany of supporting the Putin regime with billions in gas purchases, even as it buys huge quantities of crude oil and petroleum from Russia. Why should the Germans be denied what others allow themselves to do?

The negative sentiment stoked by the pipeline’s construction could diminish Germany’s influence in Europe.

Nevertheless, the cost-benefit analysis for Germany may ultimately turn out to be negative. The German government hasn’t made any friends in Brussels with its behavior. "Many in the EU are angry," says Jean Asselborn, Luxembourg’s foreign minister.

The negative sentiment stoked by the pipeline’s construction could diminish Germany’s influence in Europe. Merkel encountered this recently at the EU Summit in late June. Together with French President Emmanuel Macron, she surprised other countries with the suggestion of holding a summit meeting with Russian President Vladimir Putin for the first time since the annexation of Crimea in 2014. The push failed, however, when Poland and the Baltic States, in particular, rejected it. "Germany," says one EU diplomat, "is now viewed as being close to Russia due to Nord Stream 2."

This comes as no surprise for Reinhard Bütikofer, the EU policy specialist for the Green Party. "Germany can’t lead effectively in the EU if it pursues interests that run counter to those of its neighbors and allies," he says. But he argues that Berlin flagrantly disregarded this principle in the case of Nord Stream 2. "You could almost say that the German government is pursuing a Germany-first policy here," he says.

It’s now almost certain that the pipeline will be completed. The open question now is how long it will continue operating once it goes online. The Green Party, which will potentially be part of the next government after this autumn’s federal elections, categorically reject Nord Stream 2.

And some in Merkel’s CDU are hopeful they will be able to boycott the project after the election. Roderich Kieswetter, a foreign policy expert in the Christian Democrats’ parliamentary group, wrote in a "handout on Russia issues" meant to serve as talking points for the election campaign for the federal parliament that "Nord Stream 2 is primarily a geopolitical project with which Russia aims to, above all else, eliminate Ukraine from the transit of gas to Europe." He argues that the pipeline opens the option for Moscow, "of raising political and military pressure on Ukraine without endangering its gas business with Western Europe."

Even if he essentially takes the same stance as Merkel, CDU party boss and chancellor candidate Armin Laschet, has left a backdoor open. During a recent debate with the two other candidates for chancellor, Laschet said that there were rules that had been agreed with Putin, and that if the Russian leader was to use Nord Stream 2 against Ukraine, the project could be stopped at any time, even if it is completed.

After all, he said, the commercial basis for the pipeline would then no longer exist. "It’s that simple." 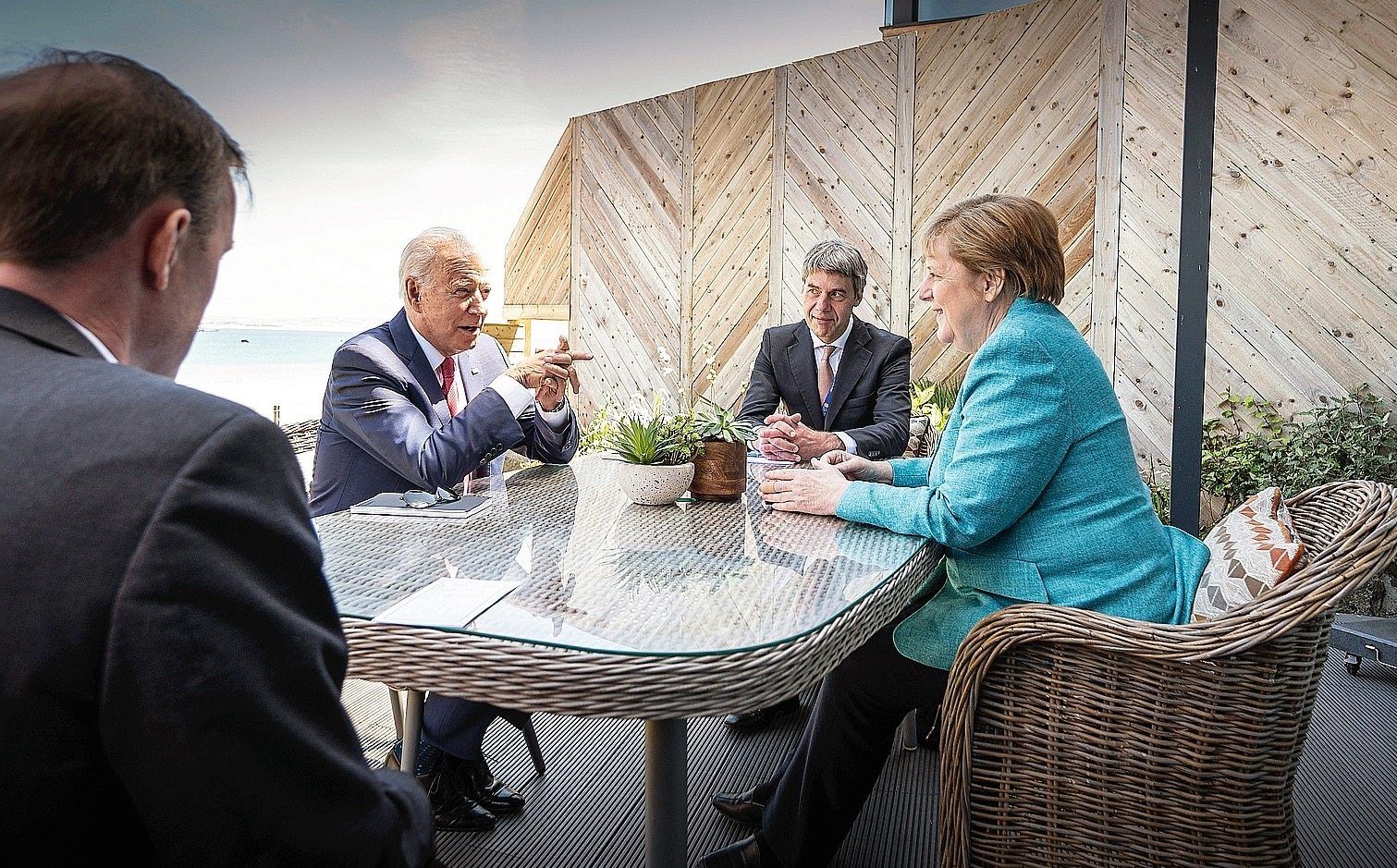 U.S. President Joe Biden and German Chancellor Angela Merkel with advisers at the G-7 meeting in St Ives, England, in June: Some of the goodwill has been used up