The former East Germany has long been eclipsed economically by the richer and more industrialized West. Yet ironically the eastern part of the country is now actually better equipped to deal with the ongoing economic crisis. 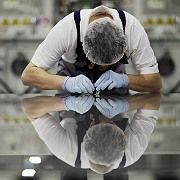 A worker at the Signet Solar factory in Mochau, near Dresden: Germany's eastern states have been less hard hit than the west by the crisis.

That, at least, is the conclusion of the government's annual report on German unity to be released on Wednesday. According to the Berliner Zeitung newspaper, which has seen the report, it states that the East's "stronger resistance to the crisis" is due to the higher number of small- and medium-sized companies there. These are thought to be able to react more flexibly to the challenges posed by the economic downturn.

Furthermore, in comparison to western Germany, companies in the former East are far less dependent on exports. Germany, a highly industrialized country, is the world's biggest exporter and has been severely hit by the slump in global trade. On Tuesday the latest figures showed that German exports had fallen by an alarming 22.9 percent in April compared with the same month in 2008.

However it is big industrial outfits, like carmakers and mechanical engineering firms, which tend to suffer disproportionately when export markets dry up -- and these are much more likely to be found in the West of the country.

This year's report on German unity makes clear that, even as the country prepares to celebrate the 20th anniversary of the fall of the Berlin Wall, there are still two Germanys with very different economic structures. However, things are changing and the government expects the former East to have caught up with the weaker western regions, such as Lower Saxony and North Rhine-Westphalia, within the next 10 years.

Wolfgang Tiefensee, the government minister with responsibility for the "new federal states," as the former East Germany is officially known, told the Berliner Zeitung that this would be a "considerable success."

The report, which Tiefensee is to present to the cabinet on Wednesday, will show that the gap between the two parts of the country is gradually narrowing, with the per capita output in the East having risen to 71 percent of that in the West, compared to just 67 percent in 2000. Companies' productivity, export quotas and capitalization are also showing signs of catching up with their western counterparts.

Nevertheless, when it comes to achieving true unity, the so-called "Wall in the mind" still persists. The report is critical of the level of internal harmony achieved so far. According to the Thüringer Allgemeine newspaper, which has also seen the document, it states that: "The mutual recognition of the citizens in eastern and western Germany is not sufficient, despite all the progress."

People from the East and West still regard each other as different, and in the East there is a feeling of discrimination, the report argues. "Overcoming differences and creating similarities is still an important aim in the continuing process of uniting Germany," it says. "Prejudices must be confronted and clichés overcome."