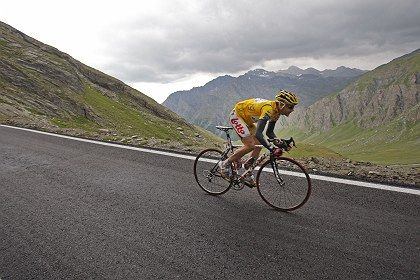 In recent years, coverage of the Tour de France prior to the race has largely centered on doping. The media has made a sport of speculating on how many riders will be caught with forbidden substances in their blood each year.

But then, once the race gets underway, coverage immediately shifts to the goings on out on the course. But on Thursday, the German public television networks ARD and ZDF indicated that they will no longer be broadcasting live from the race, German news agencies reported.

ARD president Fritz Raff said in a statement to reporters that the "value of cycling as a sport" and as "a television program" has declined significantly in the wake of this year's cascade of doping scandals.

This week's announcement that Team Gerolsteiner cyclist Bernhard Kohl tested positive for performance-enhancing drugs may have been the last straw. On Wednesday, after the announcement of test results, the Austrian cyclist admitted to having used the doping drug CERA, an updated version of the familiar and forbidden blood-booster EPO. Kohl's fall from grace is just the latest insult: Earlier this year doping scandals took down Team Gerolsteiner colleague Stefan Schumacher as well as the Italian cyclists Riccardo Ricco and Leonardo Piepoli.

ARD and ZDF are under contract to provide coverage of the Tour de France with the European Broadcasting Union (EBU), and it wasn't immediately clear on Thursday what the implications of breaking that contract might be. As recently as July the stations had agreed to extend their coverage contract through 2011, with each station paying an annual sum of €3.5 million ($4.7 million) for the privilege.

Ratings for the Tour have often fluctuated along with good and bad press the race has received. Ratings for the German stations' coverage of the event were highest during the years when Team Telekom stars Jan Ullrich and Erik Zabel dominated the proceedings. Zabel publicly admitted in May 2007 that he took EPO. Ullrich has long been under intense suspicion of doping, with many of his former teammates having admitted to doping and a former team masseur saying he help Ullrich take forbidden substances.

Although ZDF has not put out an official statement to match the one released by ARD, the station's editor in chief Nikolaus Brender, in comments made to SPIEGEL ONLINE, indirectly made it clear that ZDF would not continue covering the event without the logistical, financial, and technical support of ARD.