The Germans are always way ahead when it comes to austerity measures -- at least when it comes to having an opinion on what cuts other countries should make. The multi-billion-euro austerity package passed by the Greek parliament on Wednesday largely came about because of pressure from Berlin. In recent weeks, Chancellor Angela Merkel and other European Union leaders had repeatedly said that additional aid for Athens would be contingent on more belt-tightening.

The result is a radical austerity package that will mean some €78 billion ($113 billion) in savings and additional revenue by 2015. Some €50 billion will come from privatizations and another €28 billion through tax increases and cuts to social benefits. This comes on top of savings of almost €12 billion last year, when more than 80,000 public workers were sacked and those that remained had their wages cut by 15 percent. Pensions also saw a 10 percent reduction.

The Germans see the Greeks' need to scrimp as self-evident. But could the Germans themselves cope with such penury? Experts are skeptical. "When one considers how much we Germans bickered over €5 more or less for Hartz IV (welfare benefits), it's easier to understand what we're demanding of the Greeks," said Ulrich Blum, president of the Halle Institute for Economic Research (IWH). "Such cuts would also cause problems for the German government in terms of its ability to run the country."

To envisage how such a program would burden the country, a little math is involved. Together with last year's austerity measures, the Greeks hope to save €40 billion by 2015 using tax increases and spending cuts alone. That doesn't sound very dramatic, but the figure alone reveals little. To gain a real sense of the Greeks' savings efforts, one has to look at it in relation to gross domestic product -- the country's entire economic output. Then it becomes clear that within just five years, the Greeks want to cut spending by the equivalent of 17 percent of their total GDP in 2010.

Applying this to Germany would amount to a savings goal of €425 billion -- a gigantic sum that would mean the complete collapse of the German economy. "Removing that much money from the economy in such a short period of time would kill everything off," said Gustav Horn, head of the Macroeconomic Policy Institute (IMK).

In order to reach savings of over €400 billion, Germany would have to slash spending in the areas where it has the highest expenditures -- many of which are essential to the fabric of German society and its social-welfare model. The country would have to cut some €71 billion each year in the period until 2015.

Just to give you an idea of what would be involved in order to make savings of that magnitude, if the German government cut state subsidies for pensions, say, it would save around €80 billion a year. Slashing unemployment benefits in addition to this would bring the total savings to €120 billion. Another easy way to save money would be to simply close all the country's kindergartens, schools, universities and other educational facilities. After all, they cost the federal, state and local governments more than €100 billion each year.

The political and social price for such radical reforms would be enormous. Pensions and civil servant salaries are sacred cows that neither state-level governments nor the federal government would slaughter. And public workers already crippled the nation's universities, hospitals, and administrative offices earlier this year when they went on strike to demand higher wages. The kind of chaos they would cause if their wages were slashed is unimaginable.

If the government chose not to make cuts, the only remaining option would be tax increases. But such a measure would garner only a comparatively small sum. If the so-called "solidarity surcharge," levied to pay for the costs of German reunification, were to be doubled from 5.5 percent of an individual's income tax to 11 percent, it would raise a measly €13 billion.

Charging the full 19 percent rate of value-added tax (similar to sales tax) on goods such as books and food, which are currently taxed at a reduced rate of 7 percent, would bring in a maximum of €25 billion. But increasing the rate of VAT to 25 percent, as has been suggested, would rake in some €70 billion -- assuming people would consume as much as they do today despite the higher prices.

The Germans would also have to exert enormous efforts to achieve the equivalent of the €50 billion in revenues that Greece is aiming to get from privatizating state assets -- despite having seven times the population and correspondingly larger state-run companies.

To compare, the 32 percent stake that the German state holds in Deutsche Telekom is worth about €14 billion on the stock exchange, but would bring in much less if sold under pressure. The once-planned partial privatization of national rail provider Deutsche Bahn would have yielded proceeds of €5 billion to €8 billion.

But Germany already privatized a large portion of its former state enterprises in the past, and has therefore already done the painful work that Greece now has to push through in record time. Athens' reforms are bound to cause social upheaval, experts fear. "Imagine if Germany hadn't privatized its state-owned companies like Volkswagen, Lufthansa, Deutsche Telekom and Deutsche Post bit by bit over the years, but had to do it all within two years," says economic researcher Ulrich Blum. "It would put enormous pressure on the economy."

Greece's situation is similar to that of East Germany at the time of reunification, Blum feels. "Just like East Germany back then, Greece today can expect the transformation to trigger a shock," he says. "When the enormous public sector is trimmed down to a level that is efficient, enormous underemployment will arise. The unemployment rate could double in a short period of time."

The outlook for Greece is far from rosy. Should the government actually implement all of the recently ratified austerity measures, the country will remain in recession for a long time to come -- and social unrest will follow. Economizing, it seems, is not nearly as simple as many Germans assume. 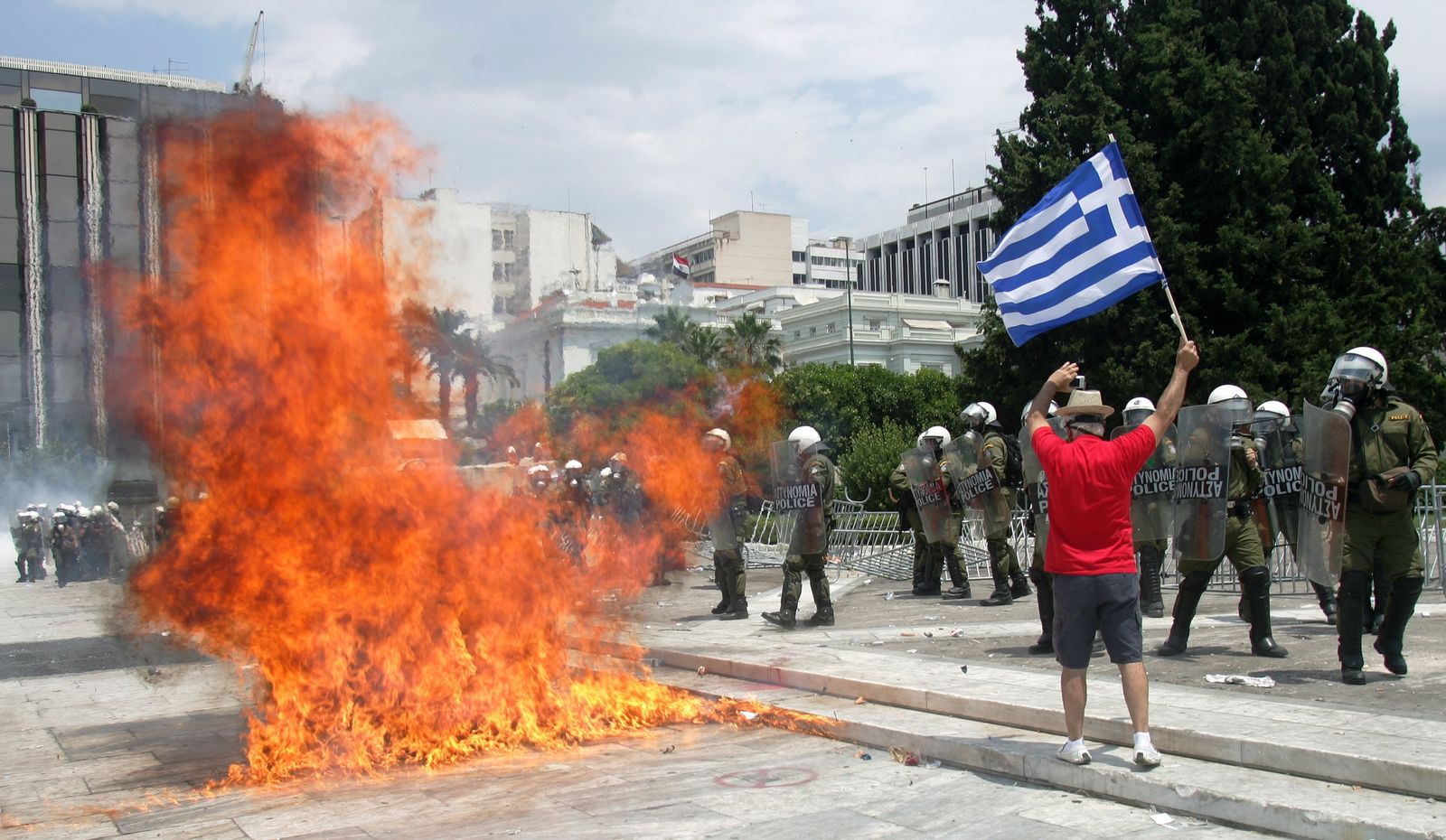