One of the central exhibitions in the post-1945 section of the Military History Museum in Dresden includes an actual German vehicle that was heavily damaged by an improvised explosive device in Afghanistan. It is juxtaposed with the parliamentary voting cards of German leaders -- including former and current chancellors Gerhard Schröder and Angela Merkel -- that authorized German participation in the United States-led intervention in Afghanistan over a decade ago.

For Col. Matthias Rogg, who has served as the museum's director since 2010, the exhibition is one of the most poignant in the entire building. The display, he said, challenged him to think about who was responsible for the violence in Afghanistan. Ultimately it altered his perspective on warfare and made him realize that from political and military leaders down to the average voting citizen, "We are all responsible for what happens" when German soldiers go to war.

Afghanistan, where 52 German soldiers have died, has arguably been the most formative fighting experience for the contemporary German military. "Soldiers now see, at last, what it means to be a soldier," said Rogg, "what it means to fight, to kill, and, perhaps to not only get wounded, but to die."

In recent years, the Dresden museum has become increasingly relevant for many German officers, who are now required to visit as part of their training. Situated in a former army barracks from the late 19th century, the museum was reopened in 2011 after a dramatic redesign by US architect Daniel Libeskind. A giant, steel wedge now jets through the middle of the building's neo-renaissance facade, symbolizing Germany's ugly and complex military history.

However, when Rogg enlisted in the German military 30 years ago, it was "impossible" to think he would ever be sent into battle. At that point, the postwar German armed forces, or Bundeswehr, had no real combat experience and no plans to play a larger role in the global defense arena.

A lanky and bookish history professor, Rogg came of age during the height of the Cold War. His decision to join the Bundeswehr in 1983 was spurred by a lofty desire to actively support the defense of a free and democratic West Germany. But, perhaps more concretely, he also believed the Bundeswehr would allow him to grow professionally and develop a sustainable career. For young soldiers like Rogg, then aged 20, military engagement was an abstract concept. Deadly warfare, he said, "was out of my vision."

The Bundeswehr has come a long way since then, having contributed to international combat operations in the Balkans, Afghanistan and the Horn of Africa. The circumstances have changed dramatically for today's generation of German soldiers. "Now, it's part of their daily work to go into a mission," Rogg explained.

The museum is more of a history museum than a military one, wrestling with the concepts of violence, power, and the grim brutality of war from the middle ages through the present day.

Rather than simply remind soldiers of names and dates, the permanent exhibitions -- divided into sections labeled, "1300 -1914," "1914-1945" and "1945-Present" -- often help them to engage introspectively with German history and, more broadly, with the idea of warfare. "The museum helps viewers to explore and confront the emotional aspects of war. It helps one understand a new, abstract dimension of war, beyond the technical components," said Lt. Col. Patrick Ruppert, 43, during a recent tour of the museum.

Ruppert, a Cologne-based lawyer and active reservist, visited the museum with a group from the Munich-based Medical Corps Academy of the Bundeswehr, where he is participating in a semi-annual military reserve training course. The tour leader, a military history teacher from the Academy, gave the group a general overview of the building before focusing extensively on World War I.

With the 100th anniversary of that conflict just around the corner, Ruppert, whose grandparents and other relatives served in the German Wehrmacht during World War II, was particularly struck by the importance -- and responsibility -- of passing down an accurate historical record to the current generation. "The generation of our grandparents is now dead and there is no one who can directly report on the past," he said. "The museum is unbelievably needed to explain the history and the memories of past wars."

Engaging with the Past

The WWI exhibition also highlighted the stark dichotomy between the German military of 1914 and the one that exists today. "The fundamental difference between the German military today and what it was 100 years ago is that we now have a democratically legitimate army that can't operate without the approval of parliament, which is a result of lessons learned from the First and Second World Wars," Ruppert said. The German military is no longer politicized and is now constrained by the rule of law, so it "cannot even be compared to what it was during the First World War," added Capt. Michael Wolf, 39, a career officer from the Medical Corps Academy, who also participated in the museum tour.

On a personal note, Wolf explained, he was struck by how the role and importance of medics, like himself, had shifted so dramatically since WWI, suggesting that the contemporary German military places a much greater premium on taking care of individual soldiers on the front line. In fact, the concept of individualism was an important theme for the visiting soldiers, who were reminded of the 'groupthink' mentality that was so pervasive in the German military in the past. "Individualism played no role in earlier conflicts, like the First and Second World Wars. But the individual in today's army remains an individual," said Ruppert, explaining why he was drawn to military service.

At the same time, Bundeswehr soldiers who view both the museum's historical sections and the contemporary exhibition on Afghanistan are reminded that some of the grimmer aspects of war have not changed. Even if the culture of the military has evolved drastically, the atrocities of war have perhaps only gotten worse. Still, Ruppert and Wolf remain prepared to serve on the battlefield when needed. Wolf, who has been deployed twice to Afghanistan and twice to the Balkans, added: "It's part of the job and that means it's not up for discussion."

Nonetheless, with the Bundeswehr's now deeply unpopular mission in Afghanistan almost at an end, it is unclear when -- or if -- the German armed forces will next join an international military coalition. Indeed, the Bundeswehr is still in the process of determining its 21st-century role on the world stage. Germany's European allies, Ruppert said, have a lot of questions about the country's commitment to strengthening European and international security. "They want to know, 'Is Germany a reliable partner?'" he explained.

Ruppert suggested the Bundeswehr should continue to play a more "self-confident" role in global affairs. But, returning to the WWI exhibition, he cautioned: "It is still very important that we not forget our history." Similarly, Wolf, whose grandfather also served in the German armed forces, stressed the necessity of Germany working within institutional frameworks like the European Union and NATO whenever it does act militarily.

Even within German society, the role of the Bundeswehr is still evolving. While the German public is perhaps more tolerant of the German military than it was in the decades immediately after WWII, Rogg said, Germany has not yet had a frank discussion about the country's "responsibility in military affairs." But he believes the museum can "play a role in facilitating this conversation" in German society. "A lot of people are surprised to see how modern and innovative we are -- how intellectual the army can be." 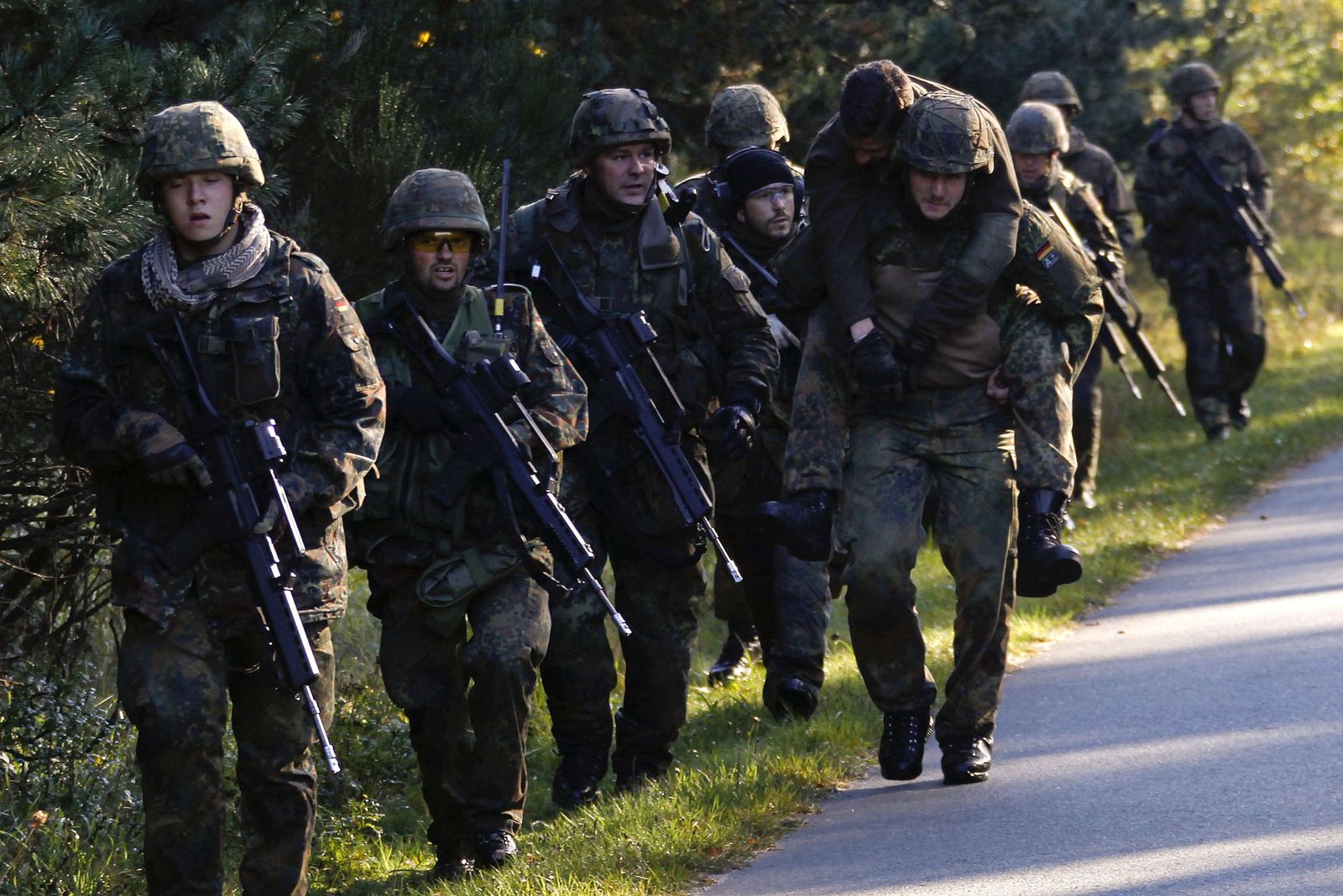 German Bundeswehr soldiers perform a drill in 2011 in preparation for their deployment to Afghanistan.