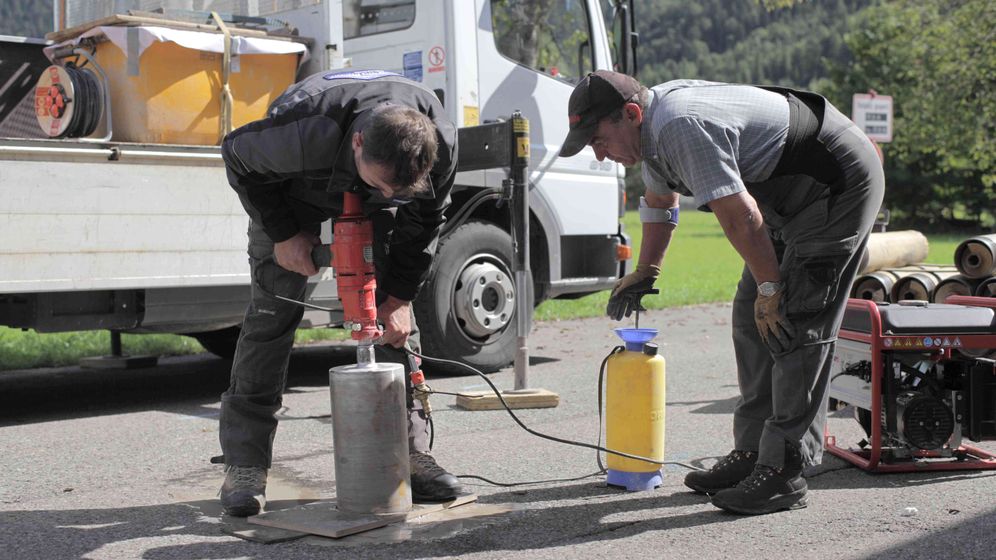 Three attempts have been made in recent weeks to find buried Nazi treasure in the Bavarian town of Mittenwald, close to the Austrian border. Even though the holes in the ground have since been filled, the traces left by drills and blue markings are still visible below a thin layer of autumn leaves.

Authorities granted permission for the undertaking in "a bid for clarity," and before too long, the story was making headlines in local papers. "The Hunt for Nazi Gold," the Garmisch-Partenkirchner Tagblatt called it.

Residents' reactions range from annoyed to amused. "I've never seen anything like it," says one. "I can't wait to see what they find down there," says another.

Behind it all is 51-year-old Leon Giesen, a Dutch filmmaker and musician with a tantalizing theory. He is convinced that Nazi treasure is languishing below Mittenwald's roads -- gold or diamonds, at the very least.

The whole idea of Nazi gold has long held a grip on the public imagination, and as a former Nazi stronghold, Bavaria provides fertile soil for many an aspiring Indiana Jones. In 1944, with the Allies and the Soviet Army threatening to advance, it was here that Heinrich Himmler, one of the most powerful men in Nazi Germany, planned to build an Alpine Fortress -- a national redoubt where Nazi Germany would fight from until the end.

And that's not all. In April 1945, the Wehrmacht armed forces and officials of the Reichsbank approved a plan to store at least part of the reserves of the German Reichsbank at Einsiedl, a small town on the southwest shore of Lake Walchen. Much of these assets were handed over to the Allies, but around 100 gold bars, sacks of dollars and Swiss francs and possibly even more hoards went missing.

Even though Giesen's theory is an outlandish one by any standards, it has generated reams of publicity in his native Netherlands. It revolves around an annotated score of the "March Impromptu" by composer Gottfried Federlein.

Legend has it that in the final days of World War II, Adolf Hitler's private secretary Martin Bormann scribbled letters, figures and runes on the score that form a code giving the coordinates of the hidden Nazi treasure.

Supposedly, a military chaplain was tasked with taking the score to someone in Munich. But it apparently never arrived, instead ending up decades later in the hands of Dutch journalist Karl Hammer Kaatee.

After spending years attempting to crack the code, he finally made the score public last December and was promptly deluged with e-mails and suggestions. Even though there is no proof that the document is genuine, it exerts a magic pull on many.

The Mystery of Mittenwald

But filmmaker Giesen now believes he's solved the mystery, maintaining that the line added to the score that reads "Wo Matthias die Saiten Streichelt" ("where Matthew plucks strings") is a reference to Mittenwald and its famous son Matthias Klotz, who founded the town's violinmaking tradition. Moreover, he contends that the score contains a schematic diagram of the train tracks that ran through Mittenwald in the 1940s, and that the rune and fragmented sentence "Enden der Tanz" ("end the dance") at the end of the score means the treasure can be found at the former site of the buffer stops.

The drilling effort in Mittenwald proved fruitful, unearthing a large quantity of unidentified metals. "Geologists call it an anomaly, a substance that doesn't belong there," says Giesen. He is now looking for a company specialized in excavations and dealing with explosives to continue the hunt, and is hoping to pay the costs by raising €25,000 with a crowdfunding campaign. He is also considering making a documentary about the project.

Local historian Jürgen Proske has his doubts about the find. "It could be a treasure chest," he says. "But it could just be a manhole cover."