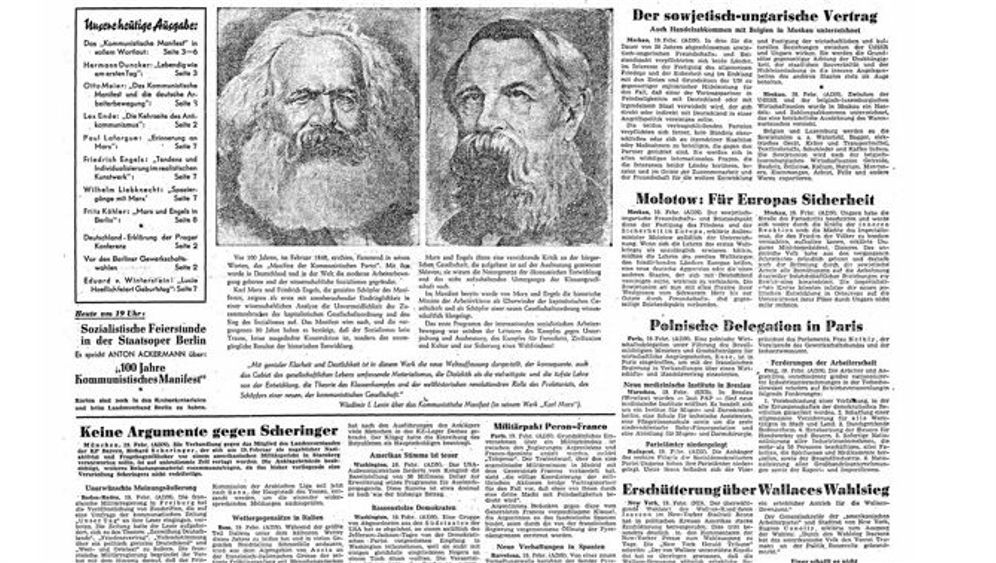 On Nov. 10, 1989 -- the day after the Berlin Wall officially fell, sending thousands of East Berliners stampeding through open checkpoints to see the other half of the city for the first time in 30 years -- East Germany's major newspapers didn't have much to say about it. Berliner Zeitung and Neue Zeit ran small articles about "new travel regulations." Neues Deutschland, the official Communist Party mouthpiece, buried the story at the bottom of the page under articles with headlines such as "Fourth Communist Party Conference Called for December 15-17, 1989" and "Information on the Policy of Renewal and the Party's New Thinking."

An overview of the role print media played in the Communist German Democratic Republic (GDR) is now more accessible than ever before, thanks to an archival project that has digitized the full texts of three major East German newspapers and made them available for free on the Web. Anyone can now rifle through some 40 years of East German history as printed in the pages of Neues Deutschland, Neue Zeit, the journal of one of East Germany's so-called bloc parties, and Berliner Zeitung, the only East German paper to regain credibility and circulation after reunification.

The Berlin State Library, with support from Germany's Center for Contemporary History (ZZF) and the Fraunhofer Society, a research organization, has spent the last four years on the project, digitizing every issue of the papers between 1945 and 1990. It's all online, as of the end of May.

Some of the headlines from 1945 present a kind of Soviet occupation zone picaresque: "Another Child Killed While Playing with Ammunition," "Curfew Between 11 p.m. and 5 a.m," "Retraining of Women for the Construction Industry. Replacement for the Men Sacrificed by Hitler. Important: Free Wash Day!"

"These texts are of great journalistic and historical interest -- not least of all to those who lived in the GDR," says Almut Ilsen, a researcher at the Berlin State Library (SBB) who oversaw the project. Particularly interesting, Ilsen points out, is the coverage of political events. "In the GDR there was no freedom of opinion or freedom of the press, and political manipulation was widespread," says Ilsen.

One particularly extreme example of that is found in the papers the day after the now-immortalized worker's uprising on June 17, 1953, when the East German government brought in Soviet tanks and gunned down crowds of peaceful demonstrators. A June 18, 1953 edition of the Berliner Zeitung pinned the uprising on "fascist elements" from West Berlin, while Neues Deutschland wrote that the government had protected the city from an attack by "agents of foreign powers" and "German monopolists" who wanted to prevent the government from improving living standards in East Germany.

Also of interest is the way political events outside East Germany were depicted in the press. On June 27, 1963, the day after US President John F. Kennedy gave his "Ich bin ein Berliner" speech in West Berlin, Neues Deutschland ran an article entitled, "Questions for the Citizens of the USA." It asks: "Why does your president play so recklessly into the blood-stained hands of notorious war criminals? Kennedy's 'peace strategy' is in truth the rearming of Hitler's generals."

From Nazi Slogans to Elvis Presley

Anyone with a solid knowledge of German can access the archive by registering online with the State Library's ZEFYS portal, where you can then search the three newspapers by date or by specific words or phrases.

By searching the word "Volksschädling," a term meaning "enemy of the people" that was popular with the Nazis, you can find out that the term was still in common usage throughout the early years of the GDR. A search for the word "Elvis" brings up a Berliner Zeitung article from 1956 entitled "The Appeal of the Primitive Man" that describes Elvis Presley as a "half illiterate" mama's boy who "can't sing."

Some 400,000 pages of newsprint had to be digitized and catalogued for the project, which wasn't without its particular challenges.

"No library had everything," says Ilsen. "There were so many missing pages, articles that had been cut out. It was very time-consuming. But we have been able to get it close to complete, something that you can't find in any library or any archive," she said, adding that the organization hopes next to digitize the West German daily papers from the same time period so that the coverage can be compared.

From the online portal, you can pull up the issue of Neues Deutschland from November 11, 1989, the day it ran that tiny article about new travel regulations. The Communist Party paper had no choice but to run a follow-up story with a different headline: "Result of New Travel Regulations: Tens of Thousands of GDR Citizens Head to West Germany for a Short Visit."