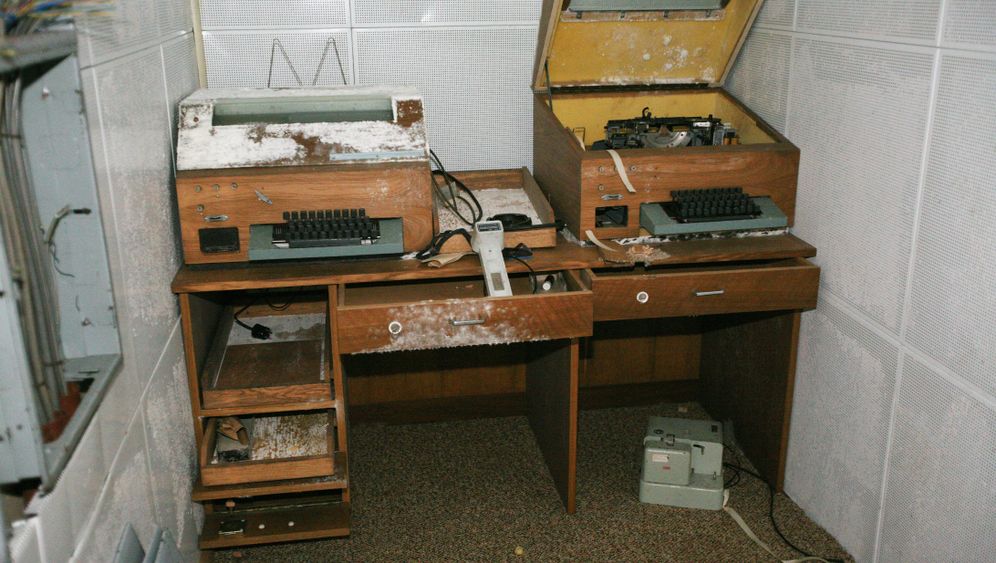 Riding in fully enclosed trucks, a military construction crew under the command of the East German National People's Army was driven to a remote woodlot near Kossa in the state of Saxony, which at the time was part of communist East Germany. They were not supposed to hear anything, see anything or say anything. They were only here to work.

First, the soldiers put up 6 kilometers (3.75 miles) of steel fencing and ran 6,000 volts of electricity through it. The men dug deep holes with excavators and poured concrete walls. Then the underground facility was fitted with electronic systems.

The secret fortress was completed in 1979. Located in the middle of a heath, the installation consisted of six separate bunkers that cannot be seen from the air, spread over an area of 75 hectares (185 acres), and built with blast-resistant steel doors and decontamination showers.

Anyone interested in touring the premises today would be well advised to wear rubber boots. The road passes through thick pine forests and ends at a gate.

Olaf Strahlendorff, who is the director of the Kossa Military Museum, steps out of a camouflage-painted hut to greet the visitors. "Hi," he says. "This is where the Russians planned to conduct World War III."

Passing through gas-proof airlocks, the man descends a narrow staircase, walking past protective suits and rusty dosimeters. The air is heavy with the smell of musty plywood. Military trucks with satellite dishes are parked inside 40 meter (130 feet) long underground structures known as "vehicle tubes."

Until recently, the official line was that this unusual facility served as a shelter for the territorial command of the third military district of the National People's Army, which would have had some 90,000 troops under its command at a time of war.

But a number of historians now suspect that it served a different purpose. Torsten Diedrich, for instance, of the Potsdam-based Military History Research Institute, attributes a far greater role to the bunker -- which the German armed forces, the Bundeswehr, in a perhaps shortsighted move, sold to a taxidermist in South Africa in 1993. "Kossa was a command bunker for the Warsaw Pact," Diedrich says.

In the event of military hostilities, 350 officers and non-commissioned officers, along with a complete telecommunications team of 250 specialists, could have reported for duty in this prison-like stronghold, where they would have commanded an army of millions as it headed toward Western Europe.

Even today, there are telephones sitting in the dust of the bunker. Subterranean antenna arrays extend under the forest floor. The bunker had direct lines to Moscow. Using tropospheric radio stations, they would have been able to send messages even through large atomic flashes.

But would that have been enough for the final battle? Some experts remain skeptical. "I think it's a bit too small for a frontline command center," says Bundeswehr historian Heiner Bröckermann.

Behind the controversy lies a fundamental problem. Although Hollywood films often portray gruff Soviet marshals with their fingers poised atop a red button, no contemporary historian can say with any degree of certainty where the command posts for a nuclear war would have been located.

When the Soviets withdrew from the former East Germany, they left behind a large number of gutted defensive structures and contaminated military training grounds, but no one knows exactly what purpose these facilities served.

What is clear, however, is that in the event of a war, East German leader Erich Honecker would have taken refuge in Prenden, near Berlin, where the Politburo had set up a vast fortified bunker with a full kitchen and a bath. But what purpose were the other 1,200 bunkers in the GDR designed to serve?

These days treasure hunters armed with metal detectors occasionally poke around in the musty subterranean chambers. Some of the structures have collapsed or filled with water. Others have been turned into museums.

The Shape of World War III

Mushrooms have been grown at times in the Kreien command post. Meanwhile in Mosel near Zwickau, a former National People's Army signals HQ is now home to a Volkswagen engine test rig. "The Russian archives will still be sealed for another 70 years," says Diedrich, "which is why we don't know enough to decipher the purpose of these buildings."

Nonetheless, quite a bit has been pieced together about the general shape of Russian scenarios for a world war between the Eastern Bloc and the West.

When a number of archives were opened after the end of the Cold War, the world learned that -- if push came to shove -- the Soviet army was prepared to take the West by surprise with a decisive attack. Europe stood closer to the nuclear abyss than many had thought.

It's true that Eastern Bloc military planners always worked on the basis of the assumption that an act of "aggression" would come from NATO. Nevertheless, it would have been sufficient for the Soviets to discover compelling evidence of an impending attack for the General Staff to order a pre-emptive nuclear strike.

Such an assault was planned to be rapid and surprising. "They were determined to conduct the war on the opponent's territory," says contemporary historian Harald Nielsen.

To prepare for the eventuality of a full-scale military conflict, Moscow's top military brass divided the world into 14 "teatr voiny" ("theaters of war"), extending from the Far East to the Arctic Ocean.

The Kremlin anticipated the heaviest fighting in Central Europe. The region has "outstanding economic importance and particularly large reserves of people," noted the former commander-in-chief of the Warsaw Pact, Andrei Grechko.

This prompted the communist alliance to keep a massive 100 divisions (roughly 2 million troops) on standby for the "Western theater of war." On the territory of the GDR alone, the Russians had 7,000 tanks, 6,500 armored personnel carriers, 700 aircraft and 31 nuclear warhead depots.

The moment the command was issued, everything was to go extremely rapidly:

During the first 90 minutes, this ground assault would have been accompanied by a hail of conventional and nuclear warheads aimed at thousands of predetermined targets.

NATO facilities, airfields, communications centers, government offices, power plants and traffic junctions as far as the Rhine River would have been reduced to ashes. Currently accessible campaign maps of the Warsaw Pact have red circles above Antwerp, Amsterdam, Bremen, Cuxhaven, Emden and Munich.

Then the tanks would have rolled out. "The attacking soldiers were supposed to reach the banks of the Rhine before any of them showed symptoms of radiation sickness," says Polish historian Pawel Piotrowski. The plan was then to relieve these radiation-contaminated troops with units of the "Second Strategic Squadron." NATO officials called this the "Polish-Soviet steamroller."

Such a colossal campaign would have required a war room -- a nerve center to coordinate the various armies, air and ground forces, and missile brigades. But where was it located?

What historians do know is that if a major war had broken out in the 1970s, the commander-in-chief of the United Armed Forces of the Warsaw Pact, Leonid Brezhnev, would have moved to a bunker near Moscow. That's where the lines of command would have converged.

In Legnica, Poland, 20 kilometers (12.5 miles) east of the Oder River, which runs along the Polish-German border, a key advanced command post was located which is thought to have been the coordinating headquarters for the whole of Europe. A total of 300 generals and 60,000 soldiers were constantly stationed there.

This command post was too far away, however, for a blitzkrieg fought in the region between the Elbe and the Rhine. What's more, documents show that the operational command for this major assault on the West was to be in the hands of the high command of the Soviet armed forces in Germany.

The top commanders of this unit lived on a military base in Wünsdorf south of Berlin, although during a state of heightened alert, they would have immediately fled to another location. The base's cover had been blown -- NATO had spotted it.

Where would the top brass have gone? What hiding place would they have selected for a nuclear war? That is the key question.

Hans-Albert Hoffmann, a former lieutenant-colonel in the National People's Army, thinks he knows where they would have headed. He presumes that the front staff, which included up to 1,000 officers, would have slipped out undetected during the night and made its way "to Möhlau or Schwepnitz."

The names stand for two Soviet military installations that were never used during peacetime and were kept strictly secret.

The facility at Möhlau is closed today after having been demolished with explosives. Schwepnitz -- which has never been thoroughly explored -- has two underground levels and is flooded with rainwater.

Falkenhagen in the German state of Brandenburg is often mentioned as the former East Germany's nuclear war command center. Back during World War II, the Nazis built a chemical plant inside the concrete bunker.

Now another site has caught people's attention: Kossa. "Its geographical location alone would have made the bunker ideal for the major strike against Western Europe," says Strahlendorff. Furthermore, NATO had never discovered the facility.

Another fact that supports this theory is that Kossa was practically jam-packed with communications electronics. The facility even had an AP 3 mainframe computer made by the East German computer manufacturer Robotron. Sophisticated video technology would have made it possible to send battle plans directly to the front.

But there are still nagging doubts. Some experts say that the bunker in Saxony is simply too small and uncomfortable. The toilets there look too spartan. "A general would have never sat on one of these," says Bröckermann. The facility also lacked a proper kitchen: In an emergency, Moscow's military elite would have had to eat hardtack and canned meat.

On the other hand, they certainly didn't intend to use the command post for very long. According to their plans, the Soviets aimed to reach the Rhine in seven days -- and the Atlantic in 12 days.

There is also agreement on the fact that under the former East Germany the facility was fully operational at all times. A skeleton crew of 48 enlisted technicians maintained equipment, kept all the rooms heated, and ensured that the electric fence was on -- making for an annual electrical consumption of 345,000 kWh.

All of these efforts were -- fortunately -- for naught. The nuclear inferno was never launched.

Nevertheless, the bunker was responsible for a large number of victims -- of the four-legged variety. As Strahlendorff explains: "Thousands of rabbits and deer perished on the electric fence."