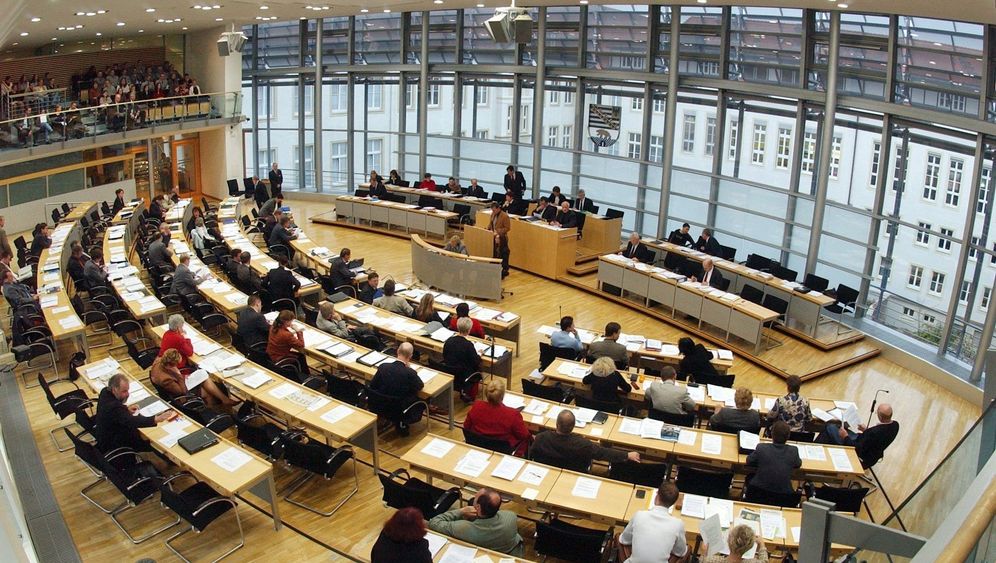 It could have been a turning point in the campaign in Saxony-Anhalt, an eastern German state which is holding elections on Sunday, March 20.

The candidates for state governor were in the city of Halle for a debate. Reiner Haseloff of the center-right Christian Democratic Union (CDU) spoke first. A 57-year-old former head of a labor exchange, Haseloff started lecturing about "growth patterns" and "stabile conditions." Within minutes, he practically managed to put the entire audience to sleep.

Jens Bullerjahn, 48, leading candidate for the center-left Social Democratic Party (SPD), was next up. It was his opportunity to attack his opponent and perhaps close the gap between his party and the CDU, which has been leading the SPD in the polls by around 9 percentage points (see graphic: "How Germans would vote today").

Bullerjahn hesitated, cleared his throat and thought for a bit. Then he said: "I can only agree with the previous speaker."

Around the hall, heads started shaking. "Stop cozying up to each other!" one older man called.

No Desire for Change

The situation had been the same for weeks. It's campaign time in Saxony-Anhalt, yet Germany's two largest parties, which have governed the state together in a coalition since 2006, seem unwilling to campaign. Their only message appears to be: We want everything to stay just how it is.

Both parties are desperate to maintain the consensus they've reached in the last years. There has been no sign of debates over the best solutions for the state, let alone visions or proposals for reforms. Both coalition partners stand united in the conviction that engaging in politics can only lose them elections.

Haseloff and Bullerjahn prefer to make public appearances where they cook together rather than debate the issues. The Christian Democrat refers to his Social Democratic counterpart as a "partner" rather than an opponent. For his part, Bullerjahn says things like: "The coalition's successful work must be continued." In February, the 75-year-old incumbent CDU governor Wolfgang Böhmer, who is not standing for reelection, made an appearance at an SPD New Year's reception in the town of Ahlsdorf, posing for pictures with Bullerjahn.

And why, indeed, should the two parties try to damage each other, when they're only going to wind up governing together again after Sunday's election? That's how things look, at least, since the SPD has ruled out the possibility of forming a coalition with the far-left Left Party, which one recent poll put at 24 percent. The result is an election that amounts to no more than a bit of inconsequential banter, and voters are losing interest.

A survey conducted by regional public broadcaster MDR reports that only 38 percent of Saxony-Anhalt residents are still interested in the election -- a drop of 6 percent from the last election in 2006, when Saxony-Anhalt set a national record for lowest voter turnout in a state election, at 44.4 percent.

Lack of Trust in Politics

The apathy and lack of debate is all the more alarming, given that the eastern state could urgently use some serious politics. Saxony-Anhalt is consistently at or near the bottom of rankings of Germany's 16 federal states on nearly every socio-economic index, including unemployment, wages and aging of the population. Although the outgoing governor was popular and his administration tackled a number of problems, many people have lost their trust in politics. They no longer believe it is possible to change anything through elections.

A little number-crunching reveals the magnitude of the erosion of trust in democracy. If the results of Saxony-Anhalt's last state election were given as percentages of all eligible voters -- not just those who bothered to go to the polls -- then the CDU and SPD would not have got 36 and 21 percent of the vote respectively, but 16 and 10 percent. The Left Party would have been at 11 percent, the business-friendly Free Democratic Party 3 percent and the Green Party just 2 percent.

The situation in Saxony-Anhalt can be described using a term coined by British sociologist Colin Crouch: "post-democracy." This refers to a system in which democratic institutions such as free elections, separation of powers and a functioning parliament remain intact, but citizens no longer take part in politics. Instead, they regard politicians with annoyance and mistrust.

Indifference on the part of the population undermines the authority of those who govern them. Democracy is a system that defines itself by numbers -- in finding majorities, but also in legitimizing its policies. And how legitimate is a government that has the support of only a third of its people?

Since German reunification in 1990, average voter turnout across all of Germany's states has dropped by 13 percent. This voter lethargy is particularly pronounced in the states of the former East Germany. Fully 93 percent of East Germans participated in the first (and last) free elections to the country's parliament, the Volkskammer, in March 1990, following the fall of the Berlin Wall.

Twenty years on, that enthusiasm for politics has vanished. Turnout for local elections in the eastern state of Brandenburg last year was between 20 and 38 percent. And only 29 percent of former East Germans consider democracy the best form of government, according to a survey by polling institute Allensbach.

There are some places in Saxony-Anhalt where it seems democracy never quite took off in the first place. One such town is Sangerhausen, located in the Mansfeld-Südharz district. Only 43 percent of residents here participated in the 2006 state parliament elections. This year, a local museum director invited representatives of all the parties to a discussion. The politicians ended up sitting alone on the stage -- aside from the director and their own staff members, there was hardly anyone in the audience.

"The lack of interest is alarming," says Claudia Dalbert, a psychology professor at Halle University and the Green Party's leading candidate in Saxony-Anhalt. She blames the CDU and SPD, whose lackluster election campaigns, she says, are discouraging many. "People have the impression that the results were determined and the government posts appointed a long time ago. The CDU and the SPD are making fun of voters."

The only party with a strong presence in the Mansfeld-Südharz district, as in many parts of Saxony-Anhalt, is the far-right National Democratic Party (NPD). Party supporters have hung up posters in nearly every town with slogans such as "A slap in the face for political fat cats" and "Out with criminal foreigners." Internal NPD e-mails reveal the significance party members place on the upcoming election in Saxony-Anhalt. Matthias Heyder, the party's leading candidate for the state, calls it an election that will "determine the fate of the entire national movement in Germany."

The far-right party already has a presence in the regional parliaments of the eastern states Saxony and Mecklenburg-Western Pomerania and is looking to gain a foothold in a third. The only way to achieve that goal, according to one internal e-mail, is a "battle of resources." Accordingly, the cash-strapped party is pouring nearly all available funding into the east, with one of its most important members taking charge of the campaign -- Holger Apfel, NPD leader in the parliament of the neighboring state of Saxony. Current polls show the extremist party getting 5 percent of the vote, the threshold that a party has to reach to hold seats in parliament.

"Entry into the state parliament would mean the NPD had achieved its goal," says David Begrich from the association Miteinander ("Together") that works to promote democracy and combat right-wing extremism in Saxony-Anhalt, explaining that the party would now be represented in the parliaments of three states. Now it's up to politicians from the democratic parties, Begrich says, to show what they stand for and why it's worth going to vote.

If not, he warns, the other parties will be left standing there sheepishly on March 20, wondering how the far-right managed to triumph again.