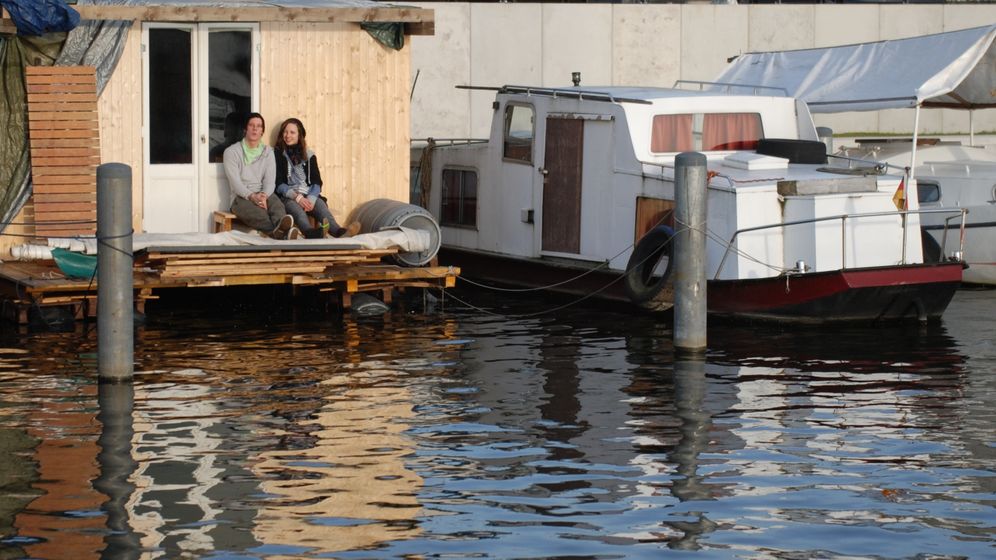 Rummelsburg Bay lies hidden between a power plant spitting fumes into the sky and an old boat yard in eastern Berlin. A few hundred meters up river, red-brick residential complexes, recently built to accommodate Berlin's housing shortage, line the banks of the Spree River. But several young Berliners, no longer able to contend with the rising rents on land, have taken to building their own houseboats on water in the marina.

Until recently, Woody Johnson, a 30-year-old unemployed Berliner, couldn't find an apartment. Couch-surfing can take its toll, and finding work in a city that has over 12 percent unemployment can be an uphill struggle. As Woody drifted toward homelessness, he decided to join the growing community of aqua-friendly souls swapping land for water. In June, he started building his own barge in the Rummelsburg Marina, banking his future on a bag of nails, a couple of drills and some planks of wood.

From Land to Water

A houseboat may not seem like a cheap alternative to Berlin's streets, but when the costs of living on land and water are compared, floating on a DIY barge can be substantially cheaper than living on terra firma. Johnson invested €1,500 ($1,910) in the materials for his floating flatboat, including more than two-dozen 50-liter (13 gallon) water barrels on which the barge floats, but the planks of wood came free from eBay. The doors and windows were found and recycled from the street. "I never had to buy any wood," says Johnson. "I just had to collect it." Such "dumpster diving" entrepreneurship has kept his costs low.

Johnson says he worked on the houseboat for six months. "We started in June, but the change of seasons slowed things down," he says. Even the recent spell of extreme cold in Berlin didn't force him back on land. One of Johnson's neighbors, also living on a barge, has a chimney. "Too expensive," says Johnson, referring to the indoor fireplace. "I've insulated the boat, and I just use an electric heater."

The barge itself is 28-square-meters (301 square feet) large, over 2 meters (6.5 feet) tall and built out of about 20 solid planks of wood. While Johnson briefly studied carpentry in the early 2000s, he says he couldn't have built his new home without "the guidance and inspiration" of a pioneer who built his own barge and wrote about it online. At Schwimmding.de (in German), Robert Adè offers advice and step-by-step illustrations on building floating houses on a small budget. "He really helped me out because he'd done it from scratch and with no money," Johnson says.

Adé says he sold his own boat for €500 two years ago. "It's no fun living on a houseboat when it's -20 degrees Celsius," says the 55 year old. "In the summer, it's great because there are other people around who live on houseboats and everybody helps each other out. In the winter, there is no water community at all." Adé says he now would rather spend his holidays on a beach in Tenerife than on a barge in Berlin.

Johnson disagrees. "You can't buy the peace and calm of the marina anywhere," he counters. Though the buzz of traffic can be heard in the distance, the tree-lined secluded bay offers residents a cheap taste of seclusion.

The small harbor charges €6 per day for guests to anchor a boat, while members, such as Johnson, pay €70 per month for the right to anchor there permanently. Water and toilet facilities are provided separately by the harbor authorities, and electricity is an extra cost. A similar space on land could cost up to €500 per month.

While the barge is primarily meant to be Johnson's residence, this summer he plans to recover some of his investment. With a little interior decorating and some shrewd marketing, Johnson hopes to rent his floating cabin to tourists at a premium.

But while Johnson settles in, on the opposite bank of Rummelsburg Marina, an established houseboat community faces eviction. Treptow Harbor hosts a 20-year-old enclave of 13 boats. Manja Ebert, owner of the houseboat "Risiko," says an eviction notice has been served on her and her neighbors by the Berlin river tour operator Stern und Kreisschiffahrt, which owns the pier where the houseboats are docked.

Ebert speculates that the move was made to accommodate a multi-million-euro property development project along the banks of the Spree River, called Mediaspree.

Supporters say Mediaspree has attracted much needed investment to the rundown riverbanks of Germany's capital, while critics accuse the development of furthering Berlin's drive toward gentrification. A spokeswoman for Stern und Kreisschiffahrt declined to comment on the evictions.

Meanwhile, in western Berlin, the houseboating world is much different. Prefabricated houseboats, such as the dozen or so docked near Berlin's Tiergarten Park recently, come with a distinctly higher price tag than Johnson's DIY model. The community is lined with protective fences and intricate pathways and hedges, and these water residents pay significantly higher rents to dock their luxurious houseboats in the affluent residential area of Charlottenburg. Prices for mid-range, predesigned boats range from €40,000 for a studio, to €300,000 for a two-bedroom home.

Further west, on the banks of Lake Tegel, a German property developer is offering "Floating Houses" as part of an exclusive lakeside development called Humboldt Island. These two-story homes on the water, which are a 30-minute commute from the center of Berlin, cost between €600,000 and €700,000.

While Johnson's DIY barge lacks the grandeur of some of its up-market counterparts, he says he is "happy just to see it built." The self-made captain plans to build a second, "more mobile extension," to move around on next year.

"The follow-up will be a more professional effort," he says with a hammer in hand. The first barge, meanwhile, takes its name from the daydreaming spirit of its captain: It's called "The Wanderer."