SPIEGEL ONLINE: Mr. Ritschl, Germany is coming across like a know-it-all in the debate over aid for Greece. Berlin is intransigent and is demanding obedience from Athens. Is this attitude justified?

Ritschl: No, there is no basis for it.

Ritschl: That may be, but during the 20th century, Germany was responsible for what were the biggest national bankruptcies in recent history. It is only thanks to the United States, which sacrificed vast amounts of money after both World War I and World War II, that Germany is financially stable today and holds the status of Europe's headmaster. That fact, unfortunately, often seems to be forgotten.

SPIEGEL ONLINE: What happened back then exactly?

Ritschl: From 1924 to 1929, the Weimar Republic lived on credit and even borrowed the money it needed for its World War I reparations payments from America. This credit pyramid collapsed during the economic crisis of 1931. The money was gone, the damage to the United States enormous, the effect on the global economy devastating.

SPIEGEL ONLINE: The situation after World War II was similar.

Ritschl: But right afterwards, America immediately took steps to ensure there wouldn't be a repeat of high reparations demands made on Germany. With only a few exceptions, all such demands were put on the backburner until Germany's future reunification. For Germany, that was a life-saving gesture, and it was the actual financial basis of the Wirtschaftswunder, or economic miracle (that began in the 1950s). But it also meant that the victims of the German occupation in Europe also had to forgo reparations, including the Greeks.

SPIEGEL ONLINE: In the current crisis, Greece was initially pledged €110 billion from the euro-zone and the International Monetary Fund. Now a further rescue package of similar dimensions has become necessary. How big were Germany's previous defaults?

Ritschl: Measured in each case against the economic performance of the USA, the German debt default in the 1930s alone was as significant as the costs of the 2008 financial crisis. Compared to that default, today's Greek payment problems are actually insignificant.

SPIEGEL ONLINE: If there was a list of the worst global bankruptcies in history, where would Germany rank?

Ritschl: Germany is king when it comes to debt. Calculated based on the amount of losses compared to economic performance, Germany was the biggest debt transgressor of the 20th century.

Ritschl: No, the country has played a minor role. It is only the contagion danger for other euro-zone countries that is the problem.

SPIEGEL ONLINE: The Germany of today is considered the embodiment of stability. How many times has Germany become insolvent in the past?

Ritschl: That depends on how you do the math. During the past century alone, though, at least three times. After the first default during the 1930s, the US gave Germany a "haircut" in 1953, reducing its debt problem to practically nothing. Germany has been in a very good position ever since, even as other Europeans were forced to endure the burdens of World War II and the consequences of the German occupation. Germany even had a period of non-payment in 1990.

Ritschl: Yes, then-Chancellor Helmut Kohl refused at the time to implement changes to the London Agreement on German External Debts of 1953. Under the terms of the agreement, in the event of a reunification, the issue of German reparations payments from World War II would be newly regulated. The only demand made was that a small remaining sum be paid, but we're talking about minimal sums here. With the exception of compensation paid out to forced laborers, Germany did not pay any reparations after 1990 -- and neither did it pay off the loans and occupation costs it pressed out of the countries it had occupied during World War II. Not to the Greeks, either.

SPIEGEL ONLINE: Unlike in 1953, the current debate in Germany over the rescue of Greece is concerned not so much with a "haircut", but rather an extension of the maturities of government bonds, i.e. a "soft debt restructuring." Can one therefore even speak of an impending bankruptcy?

Ritschl: Absolutely. Even if a country is not 100 percent out of money, it could still be broke. Just like in the case of Germany in the 1950s, it is illusory to think that Greeks would ever pay off their debts alone. Those who are unable to do that are considered to be flat broke. It is now necessary to determine how high the failure rate of government bonds is, and how much money the country's creditors must sacrifice. It's above all a matter of finding the paymaster.

SPIEGEL ONLINE: The biggest paymaster would surely be Germany.

Ritschl: That's what it looks like, but we were also extremely reckless -- and our export industry has thrived on orders. The anti-Greek sentiment that is widespread in many German media outlets is highly dangerous. And we are sitting in a glass house: Germany's resurgence has only been possible through waiving extensive debt payments and stopping reparations to its World War II victims.

SPIEGEL ONLINE: You're saying that Germany should back down?

Ritschl: In the 20th century, Germany started two world wars, the second of which was conducted as a war of annihilation and extermination, and subsequently its enemies waived its reparations payments completely or to a considerable extent. No one in Greece has forgotten that Germany owes its economic prosperity to the grace of other nations.

Ritschl: The Greeks are very well aware of the antagonistic articles in the German media. If the mood in the country turns, old claims for reparations could be raised, from other European nations as well. And if Germany ever had to honor them, we would all be taken the cleaners. Compared with that, we can be grateful that Greece is being indulgently reorganized at our expense. If we follow public opinion here with its cheap propaganda and not wanting to pay, then eventually the old bills will be presented again.

SPIEGEL ONLINE: Looking at history, what would be the best solution for Greece -- and for Germany?

Ritschl: The German bankruptcies in the last century show that the sensible thing to do now would be to have a real reduction of the debt. Anyone who has lent money to Greece would then have to give up a considerable part of what they were owed. Some banks would not be able to cope with that, so there would have to be new aid programs. For Germany, this could be expensive, but we will have to pay either way. At least Greece would then have the chance to start over. 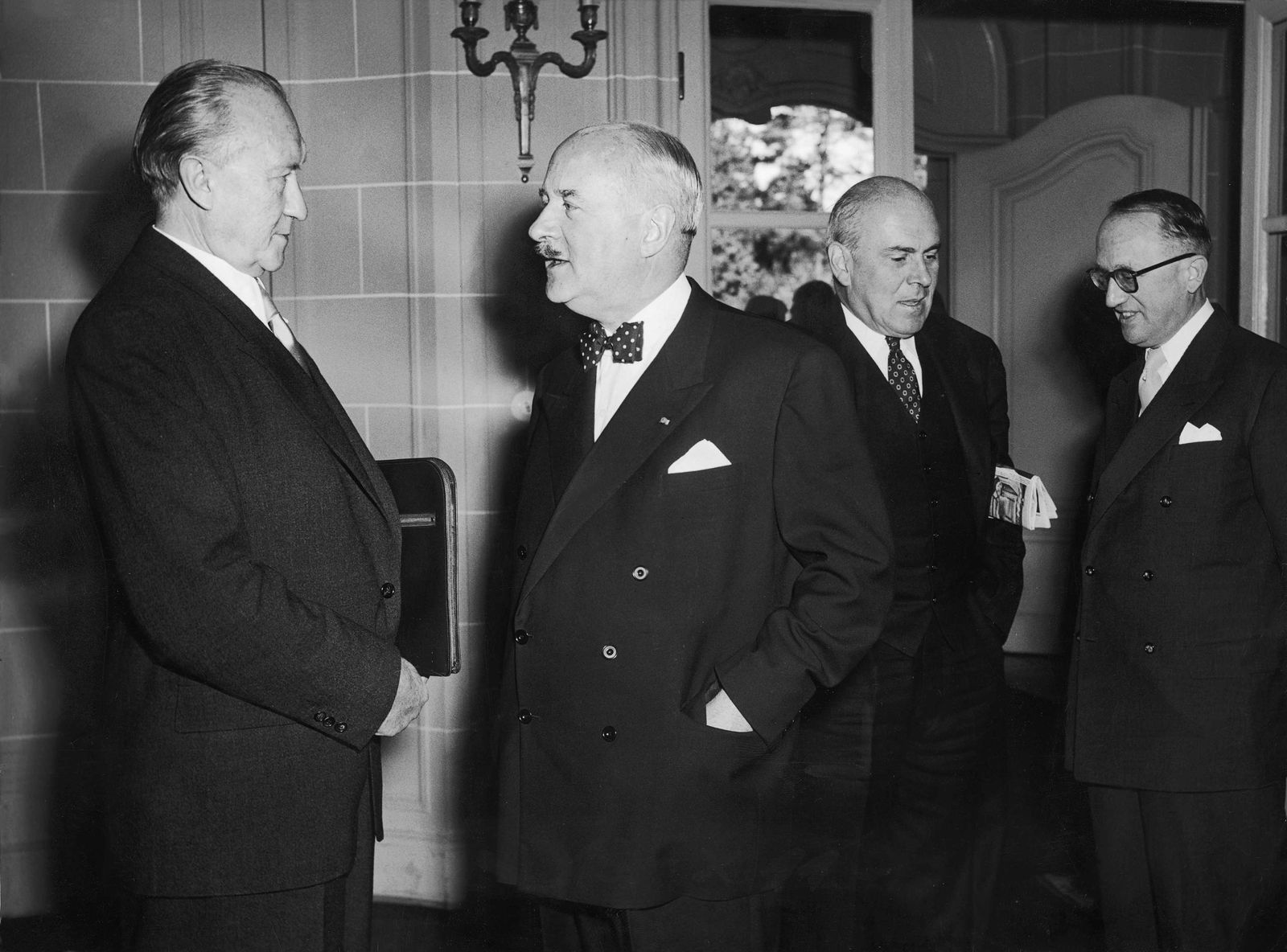 Former German Chancellor Konrad Adenauer (left) during a meeting with the High Commission of the Allies in 1951: Eschewing of reparations demands "a life-saving gesture"