"What Must Be Said" is the title that Günter Grass chose for his poem. It begins with the words: "Why have I kept silent, held back so long, regarding something openly practiced." The poem, which was published in Germany's Süddeutsche Zeitung newspaper on Wednesday and which has already provoked considerable outrage, deals with Grass's silence on Israel and the threat of military conflict between Israel and Iran. It's also about Germany supplying weapons to Israel, and about the relationship between Germans and Israelis. It's about a subject, where the title alone, "What Must Be Said", implies an unpleasant flippancy: the flippancy of breaking taboos.

"What must be said" is a thinly veiled version of another phrase that Germans who don't hold a Nobel Prize for literature like to use when they're sitting around in the pub, setting the world to rights. It can be loosely translated as: "There's no law against saying that…"

Yes, there's no law against saying these things -- except that there is an unwritten law in Germany against saying certain things, particularly given the country's difficult history. And so Grass, a few lines after he has posed the rhetorical question about why he has kept quiet, gives an explanation for his previous reticence. He felt under a "troubling, enforced lie," he writes -- a constraint that leads to "likely punishment the moment it's broken."

Günter Grass has fought many political battles in his life. He was pelted with eggs when he campaigned for Willy Brandt, who went on to become German chancellor. With his best-known novel "The Tin Drum," he was accused of writing obscenities that were allegedly harmful to minors.

So what enforced lie did he feel under, and what punishment deterred him, to the degree that he forbade himself, as he writes in his poem, from hesitating "to name that other land in which for years -- although kept secret -- a growing nuclear power has existed beyond supervision or verification, subject to no inspection of any kind?" It is the punishment, he writes, of receiving the "verdict of 'anti-Semitism'".

Grass takes four meandering verses to finally get to what he had foreshadowed with his title. Because if you hear someone in Germany beginning a statement with the words "There's no law against saying that…," you know what is coming next. It's either going to be about foreigners living in Germany -- or about Israel.

Grass makes a remarkable comparison, which is supposed to sound logical, but which is actually not. He implies that criticism of Israel is anti-Semitic. But shouldn't one call such statements "anti-Israeli" or perhaps "anti-Zionist"?

Stereotypes of a Global Conspiracy

And does one actually get punished in Germany for criticizing Israel? Just recently, Sigmar Gabriel, the leader of the center-left Social Democratic Party, wrote on Facebook that he had witnessed "apartheid" in the West Bank city of Hebron. Did he get punished for saying that? No.

When he was chairman of Germany's Central Council of Jews, Ignatz Bubis once complained that people referred to Israel as "his" country when they were talking to him. Bubis was a German citizen. Günter Grass has still not understood that "the Jews" are not the same as "the Israelis."

But in his case, even this realization wouldn't help very much. It doesn't really matter whether one calls the supposed sinister puppet masters who punish any criticism of themselves with social ostracism Jews or Israelis. It's the same stereotype that lurks behind it: the global conspiracy. And yes, at this point one unfortunately has to admit that Grass is right -- it is indeed anti-Semitic.

'Weary of the Hypocrisy'

Grass is such a vain man that, when asked to write for the German weekly Die Zeit on the occasion of prominent German writer Heinrich Böll's death, he wrote almost exclusively about himself. Now he has packed his political opinions into a poem that is almost as simple. What pathos! It might have been better if he hadn't begun his verses with the word "I" at the beginning of each sentence, and instead debated the situation in Israel more thoroughly. Then he very quickly would have gotten an idea about how the people of Israeli must feel in psychological terms, being surrounded by enemies. It will take a crisis before we can really determine whether Iranian President Mahmoud Ahmadinejad is really just a "loudmouth" -- as Grass apparently believes him to be -- who has "subjugated" his people and forced them to take part in "organized rallies." And at that point, the State of Israel will probably be able to make good use of submarines. Even ones from Germany.

But no, Grass doesn't even have to trouble himself with considerations like that. After all, as he writes, Israel is a "land to which I am, and always will be, attached." Somebody grab the gong: The cliché is now complete. After all, in society, it is no longer acceptable to use the phrase, "There's no law against saying that…" without also adding a line like, "Some of my best friends are foreigners." Does Israel even need to have friends like this? Grass spent his early years in the Waffen-SS and, now, as he writes, he is at an "advanced age" and, writing with "what ink remains," and is "sick of the West's hypocrisy."

It is in poor taste when the Germans, of all people, start telling the Israelis what to do. Never in the history of postwar Germany has an intellectual as prominent as Grass presented such hollow clichés about Israel in such a vain manner. It completely overshadows his reasonable call for both the Israeli and Iranian nuclear capabilities to be monitored by "an international entity."

It is in no way certain that the nuclear attack implied in the poem with which Israel "could destroy an Iranian people" will even happen in the foreseeable future. But one thing is certain: The lyrical first strike has already been launched -- from German soil.

Editor's note: This article has been updated to reflect the official translation of Grass' poem. 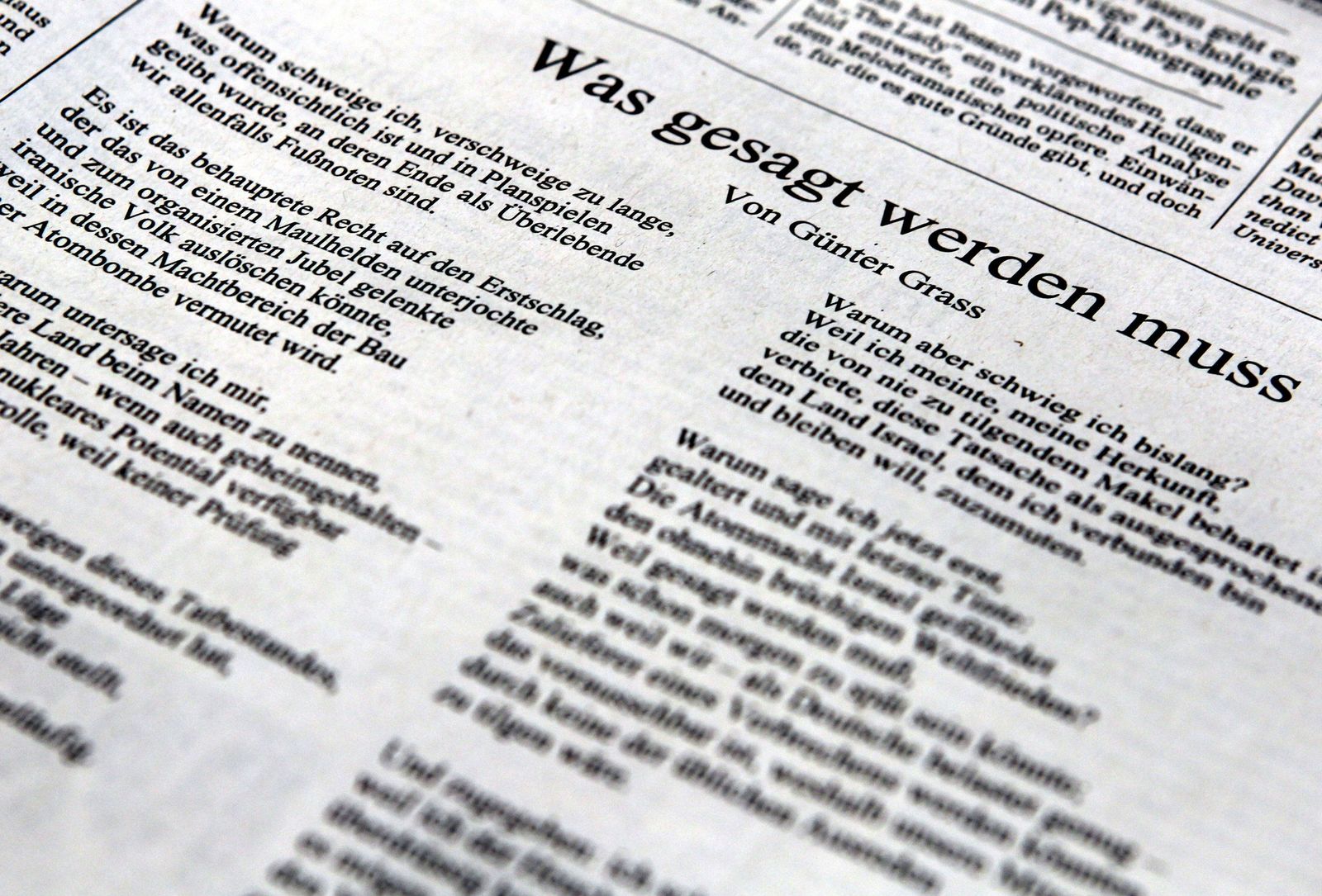 Grass's poem was published in the Wednesday edition of the Süddeutsche Zeitung.