It was on a February afternoon around 4:30 when the pensioner suddenly fainted. Perhaps the 78-year-old from the Western German region of Westerwald would have recovered quickly if he had been sitting in his living room. But unfortunately he blacked out at the wheel of his silver Mercedes while travelling at about 100 kilometers per hour (63 mph).

Witnesses report that the car drifted to the left along a straight stretch of road, crossing into the opposite lane. A 24-year-old woman driving a small oncoming car tried to veer to the side, but it was too late. The two vehicles collided and burst into flames. The young woman and the old man were burned to death inside their cars.

Chief Detective Dieter Püsch, who was one of the first to reach the accident site and helped recover the bodies, suspects that the outcome could have been much worse. "Under the circumstances, it was a stroke of luck that there wasn't a family in the oncoming car," he says. Püsch believes that many such accidents are avoidable. "It's time that lawmakers finally took action and introduced driving and health tests for senior citizens," he says.

While cars in Germany are required to undergo regular technical and safety inspections, drivers are not held to similar standards. Anyone who has ever obtained a driver's license can get behind the wheel of a car. As a result, an increasing number of drivers on busy autobahns and bustling downtown streets are people with heart problems, poor circulation and other age-related limitations, like vision problems, hearing deficiencies and the first symptoms of dementia.

According to the German Automobile Club (ADAC), 1.7 million people between the ages of 75 and 84 own a car in Germany, and they often drive under the influence of strong medications that can significantly impair their reflexes and ability to react. Based on the amount of driving they do, the threat posed by seniors is similar to that of beginning drivers aged 18 to 21. And it's to be expected that the number of accidents they cause will increase considerably in the coming years.

Hardly any other population group is growing as fast as people over 75. And soon, for the first time in German history, the majority of people who reach this age will have a driver's license. "For that reason, road traffic and accidents will change considerably in the coming years," says Dresden traffic psychologist Bernhard Schlag.

Accident statistics show that in 2011 seniors were involved in accidents at an above-average rate, were more likely than others to suffer serious consequences and bore the brunt of the blame in about 70 percent of all accidents in which they were involved. "While the situation tends to be improving in other age groups, it is getting worse among the elderly," says Schlag.

Media reports on seniors at the wheel are usually about people driving on the wrong side of the highway, mowing down flea markets and bus stops or crashing into multiple cars while parking. An elderly woman recently made headlines when she died while trying to park her car. She confused the gas and brake pedals, turned the steering wheel sharply, and was thrown from the vehicle when it began moving in a circle. Such curious cases make headlines, but they are extremely rare.

Germany Insists on Right to Drive

Most of the accidents caused by senior citizens are in situations where young people also have to pay close attention, such as in narrow lanes at highway construction sites, while changing lanes or at busy intersections, and especially when turning to the left, which requires the driver to keep an eye on pedestrians, the traffic light and oncoming traffic at the same time. "Seniors don't grasp complex situations as quickly as younger people," says Siegfried Brockmann, an accident investigator with the German Insurance Association (GDV). "And they often misjudge the speed of oncoming traffic."

In almost all other European countries, senior citizens must prove on a regular basis that they are still capable of driving a car. A health examination for people over 70 is required every five years in the Netherlands, and every three years in Great Britain and Sweden. The Spanish are even stricter. Starting at the age of 45, drivers in Spain must take a hearing and vision test, then every 10 years after that, then once every two years after the age of 75.

The European Union driver's license guideline also offers the opportunity to check drivers' ability to continue driving starting at the age of 50. Under the guideline, member states can limit the validity of licenses to "require more frequent medical checkups or other special measures, such as refresher courses."

But Germany still shies away from stricter rules, insisting that retirees' right to drive should not be restricted. Anyone who has ever passed the driving test is allowed to get into the driver's seat, even if he or she is 95, has been using a stair lift at home for years and no longer recognizes the neighbors. The only thing government officials, doctors or relatives can do is to encourage them to give up driving.

Fear of Losing the Elderly Vote

The powerful ADAC, which has many members who are over 60, consistently voices concerns about mandatory mobility tests, even criticizing them as a form of age discrimination. The only step the country's Transportation Ministry is willing to take is promoting "voluntary health checkups."

Hannelore Hoffmann-Born, a member of the board at the German Association of Traffic Medicine (DGVM), is critical of this restraint, saying that politicians are dodging the issue because they "fear losing votes" among older constituents. Accident investigator Brockmann supports a compromise, in which regular tests would be introduced for all drivers, not just those over 70. "Then a senior citizen couldn't feel treated unfairly," he says.

The GDV has an idea of how the tests would turn out among older drivers. In an ongoing study, so far 44 percent of subjects over the age of 75 have not passed the vision test. In addition, research conducted at the Dresden University of Technology has shown that seniors tend to overestimate their driving abilities.

It's no surprise that many providers of special courses for the elderly complain there is a lack of interest. The German Road Safety Watch (DVW) recently cancelled its course, and most driving schools only offer special lessons for senior citizens upon request. Nevertheless, a study co-funded by the GDV demonstrated that special training courses for seniors are very beneficial when it comes to road safety.

"Many find it difficult to admit that they really shouldn't be getting behind the wheel anymore," says 74-year-old Ilse Timm, who volunteers on behalf of the elderly in her native Geesthacht, a city in northern Germany, and drives more than 5,000 kilometers (3,125 miles) a year in her black Mercedes SL convertible. But, she adds, it isn't easy to do without a car, especially in small cities.

"There used to be small grocery stores everywhere, but today you have to go much further," says Timm. "What's an old person supposed to do if they live alone and there isn't any bus service nearby?" For this reason, she campaigns for "more consideration for elderly road users, especially from younger people."

Accident statistics show that such consideration is often absent. For example, about half of all cyclists and pedestrians killed in 2010 were over 65. This is partly because older people are more fragile and many streets and paths are not designed with the elderly in mind. On the other hand, drivers don't always make allowances for people crossing the street with wheeled walkers or struggling to stay in their lane on a bike path.

As drivers, people over 70 are also subject to additional stress at times. For example, other drivers react aggressively when they risk driving at speeds of only 70 kilometers per hour when the speed limit is 100, or people honk when they drive more cautiously, pausing a little before making a turn. To address these problems, traffic expert Schlag calls for "more patience and flexibility." Younger drivers, he says, should realize that in the future they will no longer be the ones who determine the rules and pace on German roads. "It will be the senior citizens," he says. 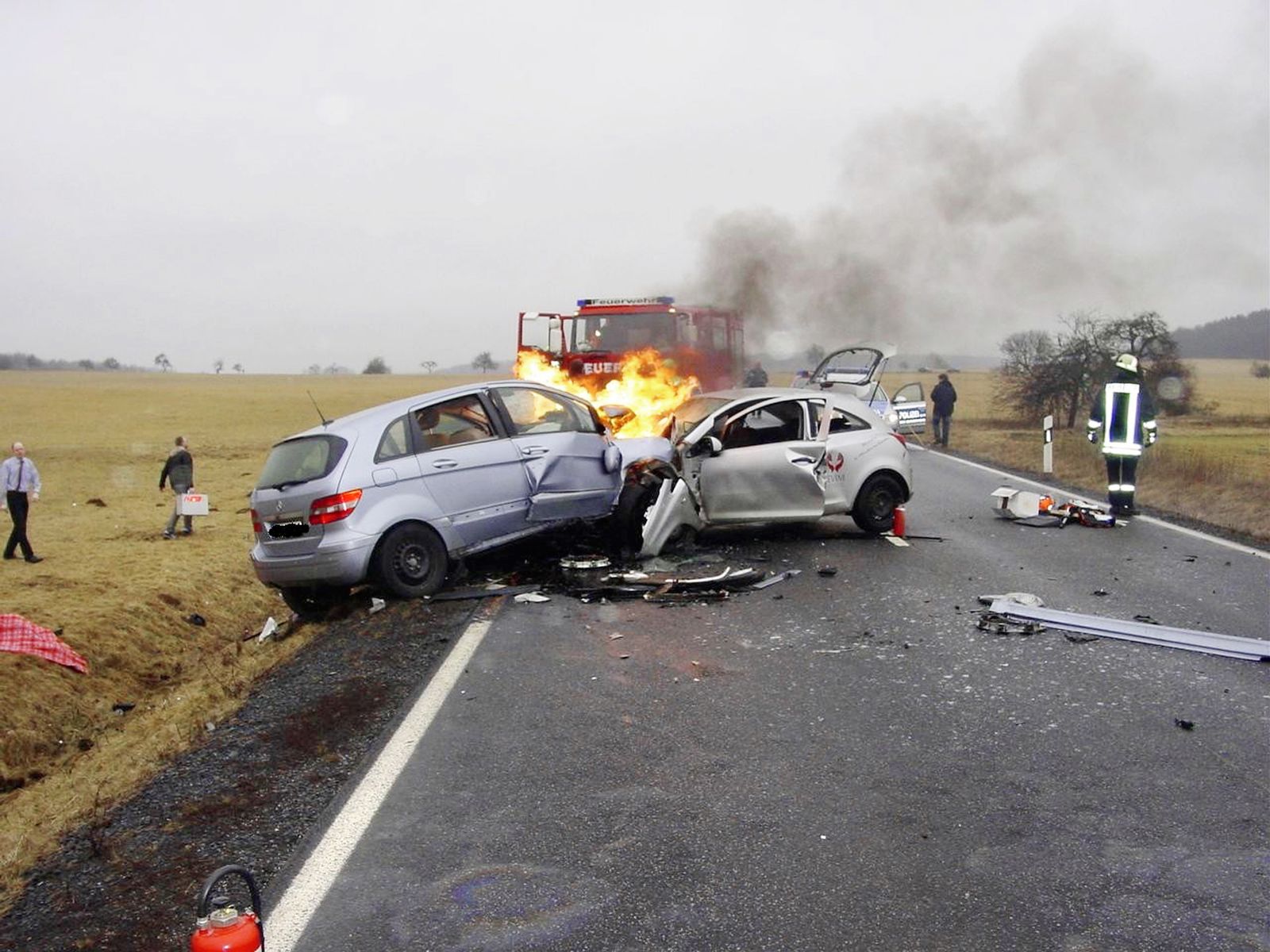 Rescue workers respond to the February accident near Westerwald, Germany.