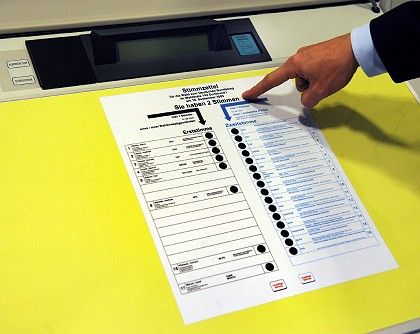 Electronic voting machines in Germany are designed to resemble traditional paper ballots, but critics argue they are vulnerable to manipulation.

In the 2005 German general election, almost two million people voted using electronic voting machines. Now two of those voters -- political scientist Joachim Wiesner and his son Ulrich -- are bringing a lawsuit before the German Constitutional Court in Karlsruhe in an attempt to get the voting method banned.

Even "cell phones are better protected against manipulation," said Ulrich Wiesner in an interview with SPIEGEL ONLINE. The Wiesners are making the case that the security concerns surrounding electronic voting machines are so great that they run afoul of the German constitution, which mandates that elections be open and transparent.

The voting machines in question are manufactured by the Dutch firm Nedap and do not print out receipts. Constanze Kurz, a spokesman for the Berlin-based hacker group Chaos Computer Club, calls the machine a "black box," and likens their use to relying on an oracle to decide elections. "You never know what's going to come out," she told Agence-France Presse on Saturday. Both the machine's software as well as its hardware are vulnerable, said Kurz. In addition to hackers accessing the voting system, the biggest concern is that a machine's memory card, which stores voting data, could be adulterated or simply replaced on its way to the vote tabulation center.

A group of hackers successfully tampered with similar machines in the Netherlands in 2006 and then went public with their doctored results, inspiring the Dutch government to impose a moratorium on the use of electronic voting machines. Ireland also has bans electronic voting.

German election law, however, permits their use, and the German parliament already rejected a petition signed by over 45,000 people to try to ban electronic voting back in 2005. That's why the Wiesners, who were also behind the petition drive, have decided to try their luck with the Constitutional Court.

German politicians are skeptical that the court will rule against the machines. In an interview on Tuesday with German radio, Max Stadler, a member of parliament with the German liberal Free Demoocrat Party (FDP), said it was very unlikely the court would rule in the Wiesners' favor, a move which might force the court to invalidate parts of the 2005 election. Stadler said he personally favors paper ballots because they inspire confidence in the electorate and possess a "certain charm." Ultimately, though, he argued that the issue was a policy question, not a constitutional one.

A ruling from the court isn't expected until early next year.