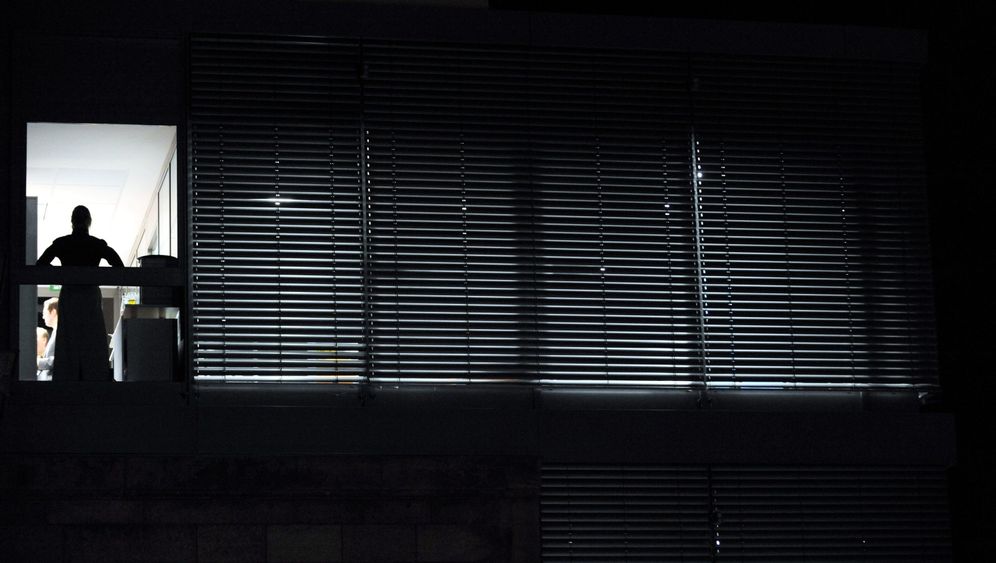 In the end, her strategy did not pay off. German Chancellor Angela Merkel had refrained from taking any potentially unpopular decisions in the run-up to Sunday's state election in North Rhine-Westphalia in the hope of securing victory for her center-right Christian Democrats (CDU) and their coalition partner of choice, the business-friendly Free Democratic Party (FDP), which also form Germany's coalition government in Berlin.

But as the results of Sunday's vote came in, it became clear that voters had dealt the CDU a heavy blow. According to provisional results, Merkel's party only got 34.6 percent of the vote, down from 44.8 percent in 2005. The FDP got 6.7 percent of the vote, meaning that the two parties do not have the majority they need to form a coalition government in the state.

It is not clear, however, exactly which parties will be governing the state. The SPD, which got 34.5 percent of votes, down from 37.1 percent in 2005, will not be able to form their preferred coalition with the Green Party, which got 12.1 percent. The Greens are in fact the only real winner of the election -- their result is almost twice the share of the vote they won last time around.

The election also featured the birth of a new political party, whose primary raison d'etre is its hatred for all things Muslim. Called Pro-NRW, the party grew out of a political group in Cologne, which cut its teeth in a campaign to prevent the construction of a mosque there. Its goal had been to win 2.5 percent of the vote, but in the end it only got 1.4 percent, well below the 5 percent hurdle needed to get into the state assembly.

Voter turnout in the election was extremely low, at just over 59 percent, down from 63 percent in 2005.

The result is seen as a major setback for Merkel. Veteran CDU politician Willy Wimmer went so far as to call for the chancellor's "immediate resignation" on Sunday evening. Party colleague Josef Schlarmann said that Merkel's "strategy of doing nothing" had failed and that she bore partial responsibility for the CDU's defeat in the state.

The defeat will make it harder for Merkel to govern. The CDU and FDP have now lost their majority in the Bundesrat, Germany's upper legislative chamber, and will now only have 31 votes out of a total of 69, instead of the previous 37. That will mean Merkel's government will need opposition approval for any major policies.

Within her party, too, Merkel will face greater opposition. Assuming Governor Jürgen Rüttgers, who is seen as the main loser of Sunday's election, does not succeed in wangling a second term, the chancellor will have lost an important ally on the left wing of her party. The CDU's other 10 state governors will want to avoid meeting a fate similar to Rüttgers'. They consider Merkel to be partially responsible for his defeat and are likely to exert pressure on the chancellor to make sure the same thing does not happen to them. That could take the form of open attacks on Merkel and is likely to weaken her position as party leader.

In North Rhine-Westphalia, the next step will be a prolonged round of negotiations over possible coalitions. "Nothing is possible without us. Let's go!" said the SPD's lead candidate, Hannelore Kraft, in the early hours of Monday morning. But it's not clear where exactly the party is going.

A "grand coalition" of the CDU and SPD would be a possibility. The center-left party, which got only 0.1 percent of the vote less than the conservatives, is unlikely to agree to that, however, partly because it would mean a second term for Rüttgers. Such a coalition would also be unpopular within the SPD, as many members see the 2005-2009 grand coaltion on the national level as having harmed the party. A grand coalition in North Rhine-Westphalia would also mean that the SPD could end up indirectly supporting Merkel's government in the Bundesrat, something that would make it harder for the SPD to take a clear stance as an opposition party.

Many in the CDU would have prefered an alliance with the Greens, something that would have been unthinkable a few years ago given the Greens' roots in the pacifist, anti-nuclear protest movement of the 1970s. Under Merkel, though, the CDU has shifted to the left and embraced environmental issues. The Greens in turn have opened themselves up to the CDU and now govern in coalitions with the CDU in the small southwestern state of Saarland and in the northern city-state of Hamburg. The CDU's poor showing in the vote means, however, that a coalition between the two parties is not possible, given that they fall short of an outright majority.

A coalition between the SPD, the FDP and the Greens would give the parties a majority, but is seen as unrealistic. The FDP had already more or less ruled out such a constellation during the election campaign, a position that Andreas Pinkwart, the head of the FDP in North Rhine-Westphalia, reaffirmed on Monday morning.

Another possibility would be a coalition between the SPD, the Greens and the far-left Left Party, which will enter the state assembly for the first time after winning 5.6 percent of the vote. That, too, seems unlikely. During the election campaign, Kraft said that the Left Party's state chapter is "not capable of governing." There may be pressure from within the SPD in North Rhine-Westphalia to try to make such a coalition work, however, as many members will see it as the least bad option for the party.

Whatever coalition ends up governing the state, Merkel will be hoping that history does not repeat itself. The CDU-FDP victory in 2005, when it wrestled North Rhine-Westphalia out of the hands of the SPD, which had governed the state for decades, spelled the beginning of the end for the SPD-Green Party national coalition government under then-Chancellor Gerhard Schröder. Shortly after the polls closed, Schröder announced he was calling snap elections for later in the year -- elections that Merkel would go on to win.

With reporting by Veit Medick, Philipp Wittrock and Sebastian Fischer 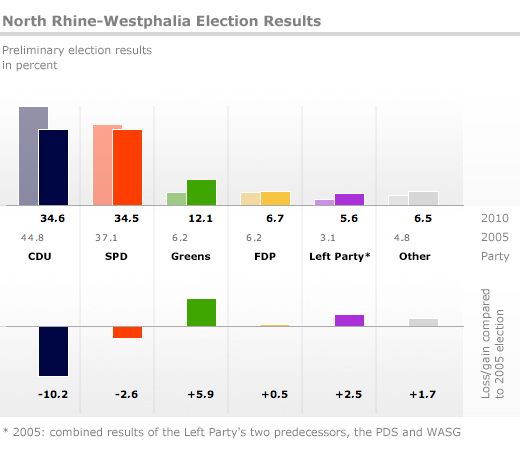